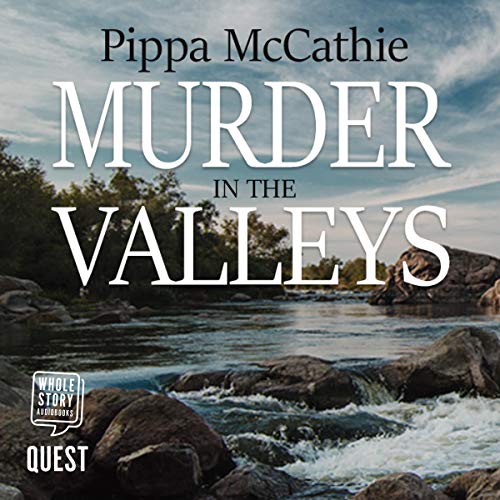 Murder in the Valleys

By: Pippa McCathie
Narrated by: Gwen Watson
Try for £0.00

Ex-superintendent Fabia Havard is struggling with civilian life when a local girl is found dead.

Out walking near the rain-swelled river running past her small Welsh town, she comes across the body of Amber Morgan. Fabia’s police training tells her instantly that the death is the result of foul play. But no longer in the force, all she can do is call it in. Yet she has mixed feelings when she discovers it is her former colleague, Matt Lambert, newly promoted to chief inspector, who will head the investigation into the girl’s death.

Despite this, having known the victim, and bored with her new job as an illustrator, Fabia can’t help probing into the murder. However, her inquiries further upset the quiet of the town. Not least her neighbour, busybody Rhona Griffiths, who was seen arguing with the victim the day before her death.

Fabia’s activity bothers Matt Lambert, but time and time again Fabia’s instincts are proved right. He can’t help leaning on her in order to progress the investigation, but that will also involve confronting why she left the force years ago. Can they put their differences aside and work together to bring the perpetrator to justice despite Fabia’s painful past being brought up again? Or will Fabia’s moonlighting get her into further danger?

Murder in the Valleys is set in the fictional town of Pontygwyn in the Welsh valleys under the shadow of the Black Mountains. It will appeal to listeners who like traditional 'whodunnits', those who like the landscape, atmosphere and people of South Wales, and everyone who likes a good listen that keeps you hanging on.

What listeners say about Murder in the Valleys

Dreadful narration, had to listen on 0.8, characters often childish and contradictory, won’t be listening to series.

Dull as can be, nearly

There is little to recommend about this story except to say that it isn’t too boring and doesn’t actually give offence. That apart it’s steady, dull, predictable, uninspired and uninspiring. Quite forgettable. I won’t be reading any more by this author.

I was uncertain what to expect

When I purchased this book along with 2 others I was uncertain what to expect and must admit this was the last of the three I listen to. Big Mistake, it was by far the best. I really enjoyed the book and can't wait for the next book to be released in audible.

Quite a good tale

The story and the performance were good, except for the reader’s tendency to overlook full stops and paragraphs, making sentences and paragraphs run into each other and causing it to become a little unclear at times, about whom she was speaking. Apart from this slight irritation her characterisation was very good.

Really enjoyable. Good story will now download next one. Narrator was excellent too., good voices

A Trip To Wales

I don’t remember ever reading a book set in Wales. I know lately there are a number of recent mysteries set in various UK setting. This is a new author and narrator for me.

The book is well written. The plot twists about. The characters are interesting as is the countryside. The protagonist is a police ex-superintendent, Fabia Havard. Fabia becomes involved in a local murder and is in contact with her former colleagues. The narrator uses an accent, but I cannot determine if this is a Welsh accent as I do not recall ever hearing one. This is an enjoyable read.

The book is seven hours and forty-nine minutes. Gwen Watson does a good job narrating the book. Watson is a British voice-over artist.

Good story, but epilogue is missing.

Story was a nice police procedural. Then it ended right in the sweet spot. Good Lord, someone missed the warm fuzzy ending and wrap up. I couldn’t believe it. So I gave it 80% for 80% of a story.

Better than I expected

This was much better than I expected. I have read a lot of the UK police genre. This story takes place in Wales but it could be anywhere. The country didn’t play much of a part in the story.

A former Superintendent was forced to leave the police under possibly trumped up circumstances. There’s a murder in her small town and her former colleague and lover(?) is sent to investigate.

I liked the characters in this book: the police officers, the townspeople alike. The narrator of the audiobook had a good voice but there were several mispronunciations.

I look forward to the next book. I await it’s release as an audiobook.

Did not enjoy narration AT ALL& I really usually favor any Celtic accent .. shrillness waay over the top & grinding.. found characters weak & uninteresting, especially the men & the women really frustrating at best .. use of language was saving Grace - didn’t even finish last chapter- it all reminded me of a Juvenile Nancy Drew

Very good, the reader perfect. At times the story seemed too long, but very good tale.

The narration was a nightmare, I couldn't even finish listening to it. All the different screechy characters voices were way overdone.