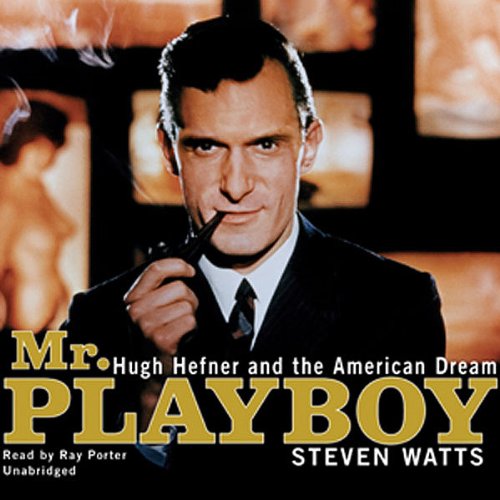 By: Steven Watts
Narrated by: Ray Porter
Try for £0.00

When Hugh Hefner quit his job at Esquire to start a magazine called Playboy, he didn't just want to make money, he wanted to make dreams come true. The first issue had a Sherlock Holmes story by Sir Arthur Conan Doyle, an article on the Dorsey brothers, and a feature on desk design for the modern office. Hefner wrote much of the copy himself and drew all the cartoons. But the most memorable part by far was the set of pictures he bought from a local calendar printer of a scantily clad Marilyn Monroe.

In this wise and penetrating biography, intellectual historian Steven Watts looks at what Hugh Hefner went on to become and how he took America with him. Hefner became one of the most hated and envied celebrities in America, standing just barely on the wrong side of decency - with as many as seven million subscribers to his magazine.

What listeners say about Mr. Playboy

felt like I was right there beside hugh. vividly written and in an extraordinary format. highly reccomend

The last thing I expected of a story about Hugh Hefner was that it would be boring, yet this author spends so much time on cultural influences that it's more like a textbook than an engaging life story.

People who are more interested in the magazine than the man

What was most disappointing about Steven Watts’s story?

What does Ray Porter bring to the story that you wouldn’t experience if you just read the book?

Great book but a little long

An interesting portrait of American culture.

I thoroughly enjoyed this book. I didn't want something that felt like fifty years of "The Girls Next Door" or lengthy descriptions of Hefner's sexual exploits. I wanted something compelling, something that could explain what made Playboy what it has become, and that is what I got with this book.
Each decade from 1953 until now is described in great detail. The Playboy empire is at the forefront, but the social climate of America is the other main character. Playboy changed with the times, shapeshifting to keep up with the trends. It's a common business model. Reinventing yourself over and over to remain a classic.
My only complaint about this book is that I found it to be a little repetitive at times, there were definitely moments where I was having flashbacks of having heard the exact same sentences a couple times before. I think it just has to do with the style it was written in.

Great Book About Influence of Playboy

If you are looking for a book primarily about Hef's sexlife and all the wild things that have happened under the Playboy banner then you aren't going to get much about that. This book is mainly a scholarly work about the influence of Playboy on our culture and the dynamic phenomenon the organization became.

Its a great book with a great reader about how Playboy was started, its iinfluence on Hef, how he and the organization have changed over time, and why Playboy influence has gone were no other girlie mag ever has.

Had fun with it.

Too much fluff, not enough substance. This author made Hugh Hefner's life story into a snoozer.

A very thoughtful, and well narrated story that illustrates Hugh Hefner's successes and failures in the context of great social and economic changes over the course of a half century.