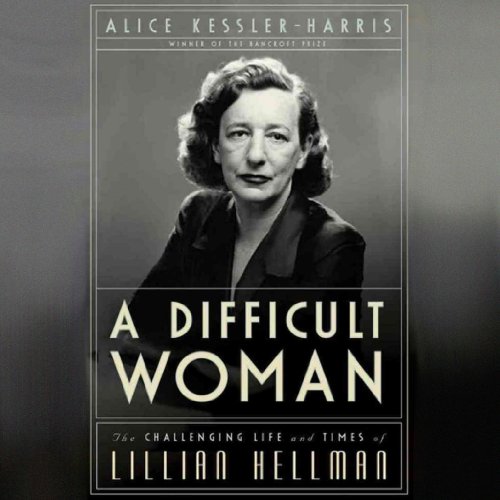 By: Alice Kessler-Harris
Narrated by: Donna Postel
Try for £0.00

Lillian Hellman was a giant of 20th-century letters and a groundbreaking figure as one of the most successful female playwrights on Broadway. Yet the author of The Little Foxes and Toys in the Attic is today remembered more as a toxic, bitter survivor and literary fabulist, the woman of whom Mary McCarthy said, "Every word she writes is a lie, including 'and' and 'the.'" In A Difficult Woman, renowned historian Alice Kessler-Harris undertakes a feat few would dare to attempt: a reclamation of a combative, controversial woman who straddled so many political and cultural fault lines of her time.

Kessler-Harris renders Hellman's feisty wit and personality in all of its contradictions: as a non-Jewish Jew, a displaced Southerner, a passionate political voice without a party, an artist immersed in commerce, a sexually free woman who scorned much of the women's movement, a loyal friend whose trust was often betrayed, and a writer of memoirs who repeatedly questioned the possibility of achieving truth and doubted her memory.

Hellman was a writer whose plays spoke the language of morality yet whose achievements foundered on accusations of mendacity. Above all else, she was a woman who made her way in a man's world. Kessler-Harris has crafted a nuanced life of Hellman, empathetic yet unsparing, that situates her in the varied contexts in which she moved, from New Orleans to Broadway to the hearing room of HUAC. A Difficut Woman is a major work of literary and intellectual history. This will be one of the most reviewed, and most acclaimed, books of 2012.

What listeners say about A Difficult Woman

What a waste if time to write this book!
When all the writer needed to do was to buy a personal ad saying I don’t like Lillian Hellman.
The fact money was made on the book is an insult and a
statement the writer is incapable of any other accomplishment worth publishing.