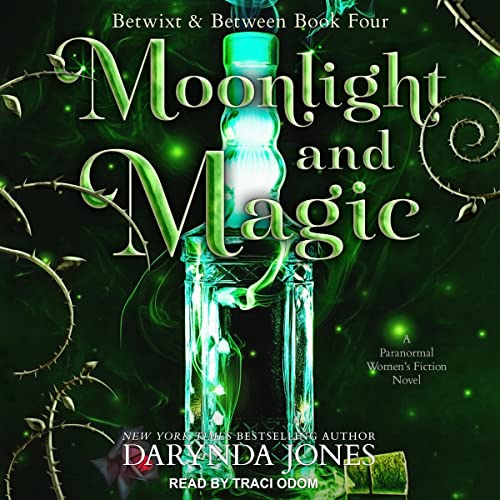 By: Darynda Jones
Narrated by: Traci Odom
Try for £0.00

Fortysomething Annette Osmund always knew she was psychic. She's not, but that didn't stop her from giving those nonexistent abilities her all. What she is, however, is a very powerful witch who has just inherited magics she never dreamed possible.

Starting over in a new town with her BFF has been an adventure. Defiance's status as a powerful type of witch called a charmling has kept Annette busy. But while Deph, a seeker, is still learning to use her magics, to control the power at her fingertips, Annette is overcome with powers of her own. Turns out, her being besties with Deph was not an accident. They were drawn to each other even before their powers emerged, and Annette learns she is also a charmling, a healer, and an alchemist. But what does that even mean?

Fortunately, there's one way to find out. She consults the house they're living in. Or, more to the point, the delicious entity haunting the house. Because, like her, he was once an alchemist. Maybe he will have the answers she so desperately seeks before she kills someone. The fact that he was once a stunning specimen of masculinity has nothing whatsoever to do with her desire to learn from a man who may or may not have been a powerful warlock.

What listeners say about Moonlight and Magic

This book does not disappoint, the storyline is as creative as always. I love the characters I strongly suggest the books are read in order otherwise you will not understand what’s going on!

Novella not worth it- should be called book 3.5

Everything about this “book” felt like a lesser version of the three before it. The mystery was shallow, the spells were sparse, the humor was barely smile worthy, and the tall, dark, and possibly deadly love interest was barely more than him constantly lifting his eyebrows or quirking his lips and her constantly distracted like she’s fourteen instead of forty-something. And I’m saying this as someone whose favorite character is Defiance’s bestie Annette.

Perhaps my feelings are being skewed by my irritation at being sold on a “book” at pre-order (when neither a summary or hour count was provided), Then, having Audible repeatedly delay delivery by half a year. Considering the first three books were 7, 8, and 10 hours long, why would I expect book four to be only 5 hrs? Also, other than via a phone call or two, Defiance and the entire rest of the series cast are absent for the first 4 hours. That’s right, this was 80% a side-caper starring Annette in Phoenix. Even the narrator’s work felt off. I would still get book five… but only after it’s published and I can gauge whether the hour count is credit vs. sale worthy.

I love this series, and was very excited when it was first announced that it would continue. So I pre-ordered, only to have it cancelled and delayed time and time again.

So now that the 4th book in the series is out, I feel that it was half done. It is missing something. Like it was not as fully formed as the last 3 books.

Here’s hoping the the next book is better.


Like many other readers, I was looking forward to the this four book which is all about Annette. We tolerated delay after delay and got what felt like an incomplete, short and rushed novel . It also felt like the author just wanted to make make the book seem longer but without any real content. After waiting for sooo long . I could have done without the cliffhanger
Still, fans of 1-3 will read / listen this for sure . I also enjoyed the narrator in the previous book. The two BFFs sounds soo much alike that I couldn’t figure who is saying what . Hope book 5 comes out very soon. Good luck to the team behind the book 5

I love Darynda and loved Definance. This book is underdeveloped, not as funny and seems to have been not as well thought out. I had been awaiting this book with excitement. Yet I eas disappointed which is a first for a Darynda Jones novel. I hope the next are back to the quality expected.

The fourth book in the Betwixt and Between series. I loved this story and highly recommend.

Love the book and would HIGHLY recommend it! I can’t for the next one to be released!

Left me hanging for the next

I just finished this book and although I admit I have never read a book of Darynda Jones I haven’t liked, this was one of the best. No matter how hard I tried to draw it out, I couldn’t. Do yourself a favor, read this one and all of her as soon as you possibly can!

love the story and I can't wait for the next book in this series.

I love it! … what a cliffhanger at the end
Just sad it was only a 5hr book