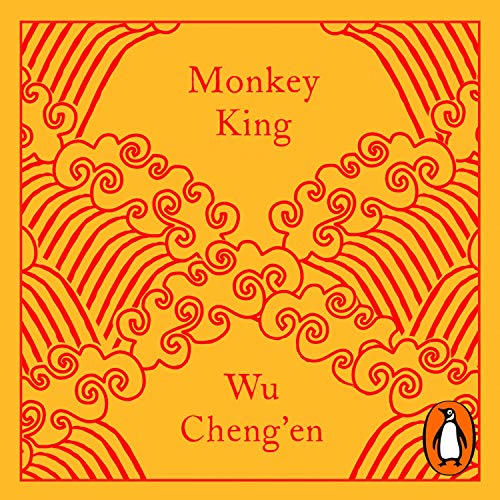 Monkey King: Journey to the West

By: Wu Ch'eng-en,Julia Lovell
Narrated by: Kevin Shen
Try for £0.00

This Penguin Classic is performed by Kevin Shen, and was translated by Julia Lovell.

One of the world's greatest fantasy novels and a rollicking classic of Chinese literature, in a sparkling new translation.

A shape-shifting trickster on a kung-fu quest for eternal life, Monkey King is one of the most memorable superheroes in world literature. High-spirited and omni-talented, he can transform himself into whatever he chooses and turn each of his body's 84,000 hairs into an army of clones. But his penchant for mischief repeatedly gets him into trouble, and when he raids Heaven's Orchard of Immortal Peaches, the Buddha pins him beneath a mountain.

Five hundred years later, Monkey King is finally given a chance to redeem himself: he must protect the pious monk Tripitaka on his journey in search of precious Buddhist sutras that will bring enlightenment to the Chinese empire.

Joined by two other fallen immortals - Pigsy, a rice-loving flying pig, and Sandy, a depressive river-sand monster - Monkey King does battle with Red Boy, Princess Jade-Face, the Monstress Dowager, and all manner of dragons, ogres, wizards and femmes fatales; navigates the perils of Fire-Cloud Cave, the River of Flowing Sand and the Water-Crystal Palace; and is serially captured, lacquered, sautéed, steamed and liquefied - but always hatches an ingenious plan to get himself and his fellow pilgrims out of their latest jam.

Comparable to The Canterbury Tales or Don Quixote, Monkey King is at once a gripping adventure, a comic satire and a spring of spiritual insight. With this new translation by the award-winning Julia Lovell, the irrepressible rogue hero of one of the Four Great Classical Novels of Chinese literature has the potential to vault, with his signature cloud-somersault, into the hearts of a whole new generation of audiences.

What listeners say about Monkey King: Journey to the West

The most annoying voice for monkey makes it unlistenable! What a shame because it is a most fantastic story.

The narrator delivers Monkey's lines in a very loud screech which means it's impossible to set the volume so that those lines are comfortable and still be able to hear the rest of the narration clearly while listening in the car, so I will be returning. Terrible shame, as otherwise it sounds good.

There are too many modern intrusions in this translation for my liking (were hobnobbing and baseball even things when Monkey was written?) Also, the translation is more childish than either of the others I know and was irritating and distracting. And the reader!!! Personally, I found the voice excruciating.

Stick with the Kenneth Williams reading.

A wonderful and captivating performance. I was hooked from beginning to end. I really spaced my listens out because I didn't want it to end. Will most certainly be listening over and over.

It's a very accessible presentation and deserves its reputation as a classic. Funny and thought provoking.

Good story with lots of humor. "Irritating narration" is called voice acting. And those who don't get it - I recommended some anime to see how "asian" characters are being played.

was a lot of fun the listen to. monkey is hilarious. very good narrator

I really enjoyed this. Loved the character voices and telling of the ancient tale in a modern vernacular.

I've wanted to get this book for a while, it's really accessible for a modern audience.

I read reviews saying the narrator's voices for the different characters is annoying - I disagree with that.

Whichever way the narrator went with the characters likely would have annoyed someone, it's one of those lose-lose situations.

I think the narrator had to put on a different voice for each character otherwise the book would be too difficult to follow.

There were times when the story became a little repetitive and confusing, but I guess that is inherent in such a long story.

If you do get this, do stick around for the introduction, which quite cleverly had been put at the end of the book for very good reason.

Fantastic voice acting, great story and wish there was more. I've been looking for audio books on Chinese mythology and this has been the best so far by a long shot.

A must for those seeking myths! Julia Lovell's translation is bar none, capturing the wit and whimsy of the original but backed by a lifetime of academic excellence. As for the story, the Monkey hardly needs the recommendation of a lowly mortal such as myself.