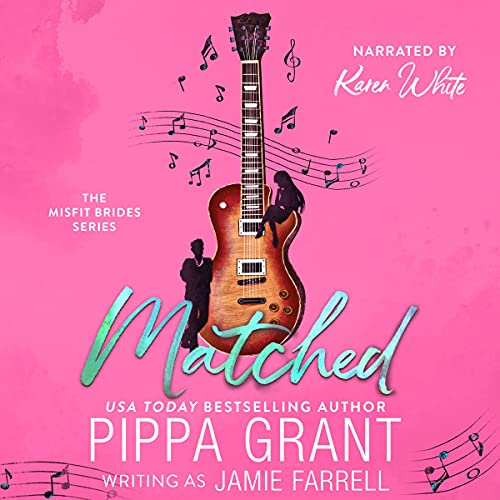 By: Jamie Farrell
Narrated by: Karen White
Try for £0.00

Welcome back to Bliss, the land of happily ever afters!

Lindsey Castellano couldn't ask for more. She's the most successful divorce lawyer ever raised in Bliss. (Never mind that she's the only one.) She's her nephew's favorite aunt. (For the moment, anyway.) And thanks to a little gift (or curse) from the universe, she's an expert at avoiding love, commitment, and inevitable heartbreak. Or so she thought until the night of her sister's wedding.

Will Truitt might've grown up living a country song - his momma died, his daddy went to prison, and his dog ran away - but as an adult, he's been blessed by the country rock gods. Being Billy Brenton on stage isn't an honor he takes lightly. He likes to give back what fame has given him, which is how he finds himself happily crashing a wedding in this quirky little bridal-obsessed town. The one thing he isn't counting on, though, is colliding with the only girl he ever let himself love.

It's been 15 years since Lindsey shattered his heart. Then, she'd been a sorority girl on her way to the top, and he'd been a lowly janitor with a little bit of a dream. Now he's on top of the world, and she's the last person he should need or want.

But she's the only person who has ever inspired his music. And he's the only man she's never been able to forget. Have the years made them wiser, stronger, and better able to love, or this time, will they simply crash and burn harder?

What listeners say about Matched

Lindsey Castellano is a divorce lawyer in Bliss and Will Truitt is now Billy Brenton the famous country music singer. Lindsey broke Will’s heart 15 years ago but he has never forgotten her. When he crashes her sister’s wedding she isn't ready for the unwanted turmoil his presence causes in her life. Will she break her own rule that she doesn't do love and she doesn't do commitment? This second story in the Misfit Brides series is entertaining and well written. Funny situations with characters from the first book make for an enjoyable story. It is fun, romantic and has a very, very satisfying ending!

Audio Rating: 4.00 (not part of the overall rating)

Quick Thoughts: This is going to be one of my top reads of 2017. Very seldom does a straight contemporary romance make my list but this had it all. It was funny, charming, smart-ass filled, and delightful. I LOVED Will and Lindsey! Their chemistry was fantastic but I also loved that their path was not easy. PLUS, that end was sooooooooooo perfect for the two of them. Especially Lindsey, who you just have to love! All the side characters added to the charm and I can't wait to continue the series.


Karen is an excellent fit for this series. She has that breezy, quirky, yet stubborn type of voice that can match all the women and their attitudes. She very much sales the quirkiness of the town and nailed that last section which just had to be fun to record!

Part of my Read It, Rate It, File It, DONE! Reviews

Where does Matched rank among all the audiobooks you’ve listened to so far?

What was one of the most memorable moments of Matched?

I would have to say the boyfriend competition.

She did a fine job with the accents and attitudes of the characters.

MATCHED by Jamie Farrell was a really fun book that I can highly recommend and that can be read as a stand-alone story. However it is a great follow up to Blissed, the first book in the series, which I also highly recommend. This series is set in a town called Bliss where the whole focus of the townfolk is about love and weddings. Sort of like a Santa's village idea, but all year round and about weddings and with cast a delightfully quirky characters whose antics will make you smile and that you can't help but love.

Matched is a second chance love story featuring Lindsey Castellano, a daughter of Bliss, who lives in and works as a divorce lawyer in the next town over because there are no divorce lawyers in Bliss. Lindsey sees her mission as saving people from their mistakes so they can have a second chance to find true love.

Will Truitt AKA Billy Brenton, first met Lindsey when she was still in college. They were both young, but he fell hard for the girl who made him believe his dreams could come true. Now he's a country music superstar and mostly due to the songs his "Angel" inspired. The ones she inspired when she broke his heart and even so, she's still the only woman he's ever loved. So when he finds himself in the town of Bliss as a favor to a friend and realizes the wedding he's there for is that of Lindsay's younger sister Natalie? He's more than ready to try for a second chance with his "Angel" and this time there will be no walking away.

I listened to the audio version of this book. Which made this great story even better. The narrator did a fabulous job on the accents and attitude of the characters. 4 stars

These books so far have been so heartwarming With honest believable characters that you feel like you’re fully immersed in their world. That’s always what I’m looking for in a book. I like to lose myself and feel like I’m part of it. Thank you for the experience.

Cute and sweet. Will is a true southern gentleman with a heart of gold, who falls for Lindsey at Spring break, and she crushed his heart after he professed his love on stage. He was a nobody when they met and she inspired him to follow his dreams in writing and singing country music, but her dream and insecurities of her gifts was not what he needed so she broke his heart and ran. 15 years later they run into each other at her sisters wedding and all those old feelings resurface for both. Will is now a successful Country Singer and songwriter who lost his creativity and his last success are the songs he wrote about his Snow Angel he met long ago. Sit down and enjoy watching their story unfold, the insecurities and heartbreak come crashing around them and what they do to understand each other and work to reach their HEA.

This cute, quick story is a winner! Will and Lindsey are a great match, but being a matchmaker herself makes Lindsey question what they have. As she begins to realize what she feels is love, she has to work through what she really wants out of life.

The author outdid herself in this story. I loved learning about Lindsay and I found her more fascinating than her sister from the first book. I had no idea her matchmaking ability was more psychic than intuition. Only complaint is that I wish the narrator had actually sung! I had to keep rewinding to sing the song myself and get the meaning behind it. The audio company could have done better on performance with guitar and actual singing...even the bad kind ;)

I have to say that I absolutely LOVED Matched. This story was fast paced,witty, and reminded me of Jill Shalvis' writing style. Anyone who knows me knows I am a huge fan of Jill Shalvis so when I compare these two authors it is a compliment. I could easily relate to Lindsey and her desire to be normal even with her special talents. Will was sexy, real, and down to earth despite being a country star. I found myself falling for him right along with Lindsey. The book hooked me from page one and was long enough to satisfy. I really can't say enough good things about Matched by Jamie Farrell. It is a must read in my book and gets 5 stars from me. Karen White is a fantastic narrator and brought out the humor in this story.

Will was a struggling performer when Lindsey fell in love with him....and found out she couldn’t handle any limelight with him.......years later ‘Billy’ crosses her path and Lindsey realizes that her Will is all she ever needed and wanted! I still struggle with this narrator BUT the story is so worth the listen!

Will "Billy" Breton and Lindsey Castellano met on Spring break when they were 19 years old. They had a week long fling that ended in broken hearts. Now fifteen years later they meet again at the wedding of Lindsey's sister. Will they get their second chance?

I loved Will and Lindsey's story! It was full of humor and fun. Jamie Farrell does a great job of writing about the quirky town of Bliss. It was fun catching up with the town and I can't wait for Kimmie's story! I would definitely recommend this book.