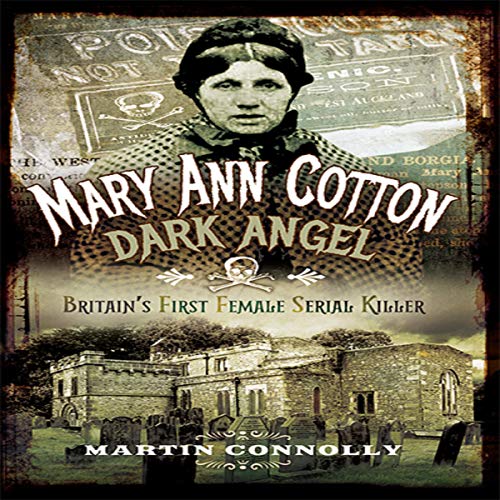 By: Martin Connolly
Narrated by: Rosie Akerman
Try for £0.00

A female thief, with four husbands, a lover, and, reportedly, over 12 children, is arrested and tried for the murder of her stepson in 1872, turning the small village of West Auckland in County Durham upside down. Other bodies are exhumed, and when they are found to contain arsenic, she is suspected of their murder as well. The perpetrator, Mary Ann Cotton, was tried and found guilty and later hanged on 24 March 1873 in Durham Gaol. It is claimed she murdered over 20 people and was the first female serial killer in England.

With a blow by blow account of the trial, this book challenges the claim that Mary Ann Cotton was the "The West Auckland Borgia", a title given to her at the time. It sets out her life, trial, death, and the aftermath, and also questions the legal system used to convict her by looking at contemporary evidence from the time and offering another explanation for the deaths. The book also covers the lives of those left behind, including the daughter born to Mary Ann Cotton in Durham Gaol.

Narration let's this down

The content is solid but unfortunately the narrator doesn't work. Her voice (through no fault of her own) is pitchy and inconsistent and sadly that distracts from the book itself

Having watched TV adaptation Dark Angel.
Was intreagd by the audio book.
Was totally engrossing and gave me a totally different insight to the TV series .
Did she do it was it by accident or a miss carriage of justice.
I'm not able to make my mind up

more factual then story. i overall liked it . very interesting i raccomend it if you like murder solving.

Story was completely all over the place. Jumped back and forth and had no rhythm at all. This was interesting content but deserved better writing. Performance is fine.

Sorry but this book did not keep my interest

Maybe reading the book would have been better. With so many people listed in the book it became difficult to follow along. Even though I listened to the entire book there is not much I would be able to recall other than she was accused of several murders, convicted of one and was hanged. That pretty much could be gleaned from the book details section.