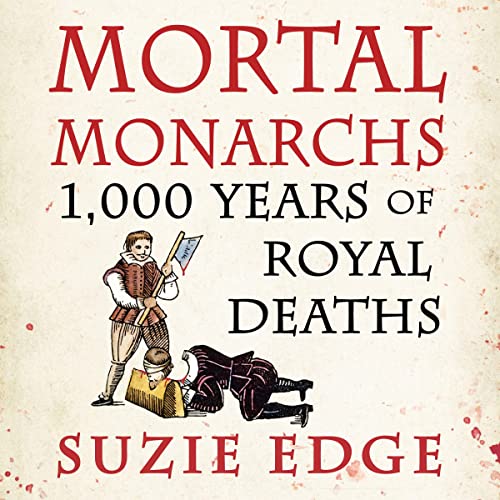 A humorous deep-dive into the varied—and oft-gruesome—deaths of the king and queens of England and Scotland.

How the monarchs of England and Scotland met their deaths has been a wonderful mixture of violence, infections, overindulgence and occasional regicide. In Mortal Monarchs, medical historian Dr Suzie Edge examines 1,000 years of royal deaths to uncover the plots, accusations, rivalries and ever-present threat of poison that the kings and queens of old faced.

From the "bloody" fascinating story behind Oliver Cromwell's demise and the subsequent treatment of his corpse and whether the arrow William II caught in the chest was an accident or murder, to Henry IV's remarkable skin condition and the red-hot poker up Edward II's rear end, Mortal Monarchs captivates, grosses-out and informs.

In school, many of us learned the dates they died and who followed them, but sadly never heard the varied—and oft-gruesome—way our monarchs met their maker. Featuring original medical research, this history forms a rich record not just of how these people died, but how we thought about and treated the human body, in life and in death.

What listeners say about Mortal Monarchs

An interesting topic, very well researched with a touch of humour. Would recommend to anyone interested in our Monarchy.

A brilliantly written book outlining all my favourite royal deaths. I have listened to it four times already. And it will be on repeat for a while to come. Great work!

Very gory and yucky in places, but wonderfully read in an often tongue in cheek and dry manner. Interesting snippets of the ailments along with fascinating details of the aftermath of each monarch.

Very much enjoyed it

A book based largely on supposition, assumption but very little tangible evidence for the actual causes of our monarchs deaths - there is no doubting the author’s intentions but this is largely an anatomy lesson masquerading as history.

Really enjoyed this one

Highly recommended!.. very informative, written with a black sense of humour and well narrated. Loved it

Suzie is amazing, her voice is calming but interesting, the knowledge is she has makes me happy

Such an amazing book

Please do more books! This was such a joy to listen to. Perfect speed, tone, narration. Well done on this masterpiece Suzie

I first discovered Dr. Edge on her Warts and All podcast, and now I’m hooked! I’m a great fan of all things medieval medicine, and her content includes the dual fascination of the royal families throughout history.

Loved it!!! Such a great listen!

This book was so interesting. Not only do you understand how they passed but it’s also very helpful to understand the line of secession.

Off to sanitize my keyboard after reading this book! Started off a little slow, picked up around the black prince, continued to get better! Watch Suzie’s TikTok’s to gain more information!

Great writing, great performance. Succinct yet incredibly informative. If you’ve enjoyed works by Allison Weir then this one is definitely for you!

Loved it. Explained many things about the lives and deaths of the kings and queens. Learned a lot about history

Great run down of the deaths of monarchs

Dr Edge's love of history and medicine shows on each page. Published shortly before Queen Elizabeth's passing it contains all monarchs up to her.

Came across Dr. Edge on TT. Her intriguing, fun, informative, explanation of the living game of thrones and who begat whom, really helped this Yankee better understand Brittania and English history. I am not a big reader, but this book was enjoyable on a two-fold level.

I can’t recommend this book enough! I learned so much! combine the intriguing stories with Suzie’s voice and it is a masterpiece!


I would listen to Suzie read anything! phonebook…back of the cereal box…anything!

Loved the reader’s voice. The storytelling flowed so well. Great book! Well worth the read.


Well written, well read, thoughtfuly produced.
I am so pleased!!!
So good!