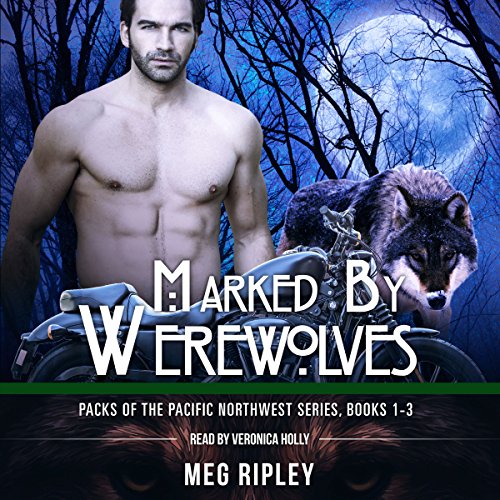 Marked by Werewolves Packs of the Pacific Northwest Series, Books 1-3

By: Meg Ripley
Narrated by: Veronica Holly
Try for £0.00

I never imagined the drama that would ensue once Dwight stepped into my life.

All I wanted to do was to make a name for myself - to claim my little piece of the pie - and buy the neighborhood bar I've been working at for the last few years. Little did I know that I'd be attracting the Wolf Brotherhood into my life.

They want to stake their claim on my bar, but just because they're the most feared werewolf biker pack in Portland doesn't mean that I'll just roll over and let them have what they want - not without a fight.

Well, I went a little too far one night and really ticked them off, and now Dwight has this twisted plan to stage my death to get the Brotherhood off my back. He's my maker and my lover, so I should be able to trust him - and God, there's just something about the fire in his touch that makes my troubles melt away; something about his deep, alluring gaze that pulls me in every time - but Dwight also happens to be a member of the Brotherhood.

Now my sister Sera is getting roped in on the drama, and they'd better not lay a finger on her. Rumor has it, she's teamed up with a rival pack to get to the bottom of my "death".

They'll stop at nothing to take me out, but I'm tired of being their victim; the Wolf Brotherhood has no idea what's about to hit them.

They've messed with the wrong chick this time.

This audiobook is intended for listeners age 18 and over. It contains mature situations and language that may be objectionable to some listeners.
©2016 Meg Ripley (P)2016 Meg Ripley
Fantasy Paranormal
Show More Show Less

What listeners say about Marked by Werewolves Packs of the Pacific Northwest Series, Books 1-3

I enjoyed listening to Veronica Holly.

This is a very steamy book with hot guys and strong females. I just love a story with strong females that know how to get what they want and the men who are just as alpha but know how to treat their women. It is very highly entertaining read that pulls the reader in. Each book flows easy into the next issues keeping your attention .

I really liked this more than I thought I would. There are some who just can’t pull off the world building you need to have for short stories. I feel like Meg did a great job not only with the world building but the characters didn’t suffer either there was enough detail for both to really suck you into this mini-series.

I very much enjoyed part one, because you think one way and you find out you’re not entirely right or wrong.
Don’t judge the book by the first part because there is so much more to the story than what happens in part 1.

Part two things really start to come together. And you need to know more, there isn’t really a lot of world-building in this part because we already have most of it from part 1.

And part three just brings it all together. I loved the characters and how they intertwine. I loved that the women are kicked butt girls who did what needed to be done. But I also loved the males that love them because they were there for them no matter what.

I also really liked the narration, I think it was well done for this book and I would listen to more.

I love a good shifter story and Marked By Werewolves was decent, unusual, and the three short stories fit together nicely. The plot, as well as the characters were developed over the three stories and had a good balance between action and romance, but what I enjoyed most was the plot twists, especially the "good" guy who ends up being the villain. The only downside, the writing wasn't as polished, and at times it felt choppy, but overall it was an entertaining, fast paced and held my attention.

Veronica Holly's performance was good. Her narration was clear, precise and well paced. I would definitely listen to another audio narrated by Holly.

I'm on the fence regarding using a credit and give the story an overall 3.5 star rating. Based on the length, and the writing, I think this would be a great deal if it was offered as a whispersync. (At the time of this review, it was not listed as whispersync.)

This is a 3-short-book compilation that is fast-paced and easy to fall into. This shifter series had an interesting premise, with a bad group of oppressive, outlaw shifters in conflict with good, law enforcement-type shifters and a couple of sisters who got caught up in their mess. I enjoyed it.

Veronica Holly did a great job with the voices, the feel of the story and conveying all the emotions and various voices appropriately and in a way that enhanced the audio experience.

I got this book via audiobook boom. This was a boxed set but actually just one story. Dwight was a terrible werewolf and meant Aiza harm. The Wolf Brotherhood were a gang of were's only interested in how much they could hurt others. There were two HEAs in this story. Azia and her sister who would not stop looking for Azia and when the story ended it was great. There were some twists that could have gone a different way but in the end they were still good. the narration kept the story flowing.

BEWARE THE BROTHERHOOD OF WOLVES

I was given this audio book set for an honest review.

Shifter books are one of two things. Really Bad, or Good. This series is Good. It kept me guessing about Dwight for quite awhile. I like that it introduced the hero later. I'd like to know more about the Brotherhood but I know enough for this story. Hope to have more to listen to soon! Narration was very good.

Unfamiliar with this genre

I have to start by saying, I'm not really familiar with this genre. This story was action packed. The characters were interesting. This is likely a good read for those into shifter stories. I was provided this ARC from and am glad for a chance to try a story in this genre.

Meg Pipley has done it again!

What made the experience of listening to Marked by Werewolves the most enjoyable?

I had read the books before, listening to them Veronica Holly gave life to how I pictured the story in my mind.

I liked how Sera wanted needed to understand what happened to her sister. Her loyalty, and love of family, drew me in.

Which character – as performed by Veronica Holly – was your favorite?

I did! Curled up in front of the fire put my earplugs on drank my tea and enjoyed.

I received this audio book for review consideration.

Would you listen to Marked by Werewolves again? Why?

I don't usually listen to books twice.. But this was a good book

What other book might you compare Marked by Werewolves to and why?

I'm not sure.. I haven't listened to a lot of paranormal shifting novels

She was a good narrator.. and well performed and had a good flow to it.

"This audiobook was provided by the author, narrator, or publisher at no cost in exchange for an unbiased review courtesy of Audiobook Blast."

I enjoyed listening to all three storylines which which intertwine into each other giving it great development of all the characters involved. The story plot was good as well as the ending. I would recommend this book. The narration was good also. I was provided this audiobook at no charge by the narrator in exchange for an unbiased review via Audiobook Boom