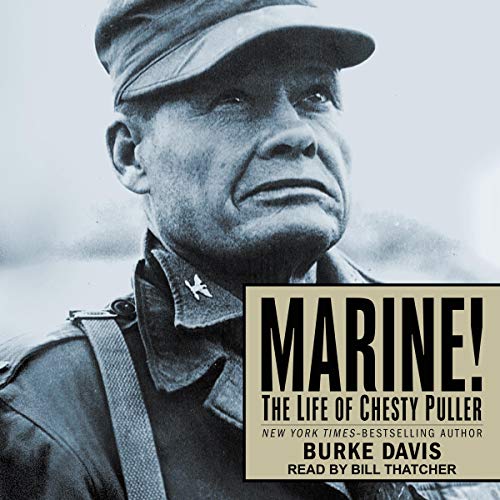 By: Burke Davis
Narrated by: Bill Thatcher
Try for £0.00

The gripping story of an extraordinary American hero, the most decorated man in US Marine Corps history, from a New York Times best-selling author.

In the glorious chronicles of the US Marine Corps, no name is more revered than that of Lt. Gen. Lewis B. "Chesty" Puller. The only fighting man to receive the Navy Cross five separate times - a military honor second only to the Congressional Medal of Honor - he was the epitome of a professional warrior. A son of the South, descendant of Robert E. Lee, and cousin to George S. Patton, Puller began his enlisted career during World War I and moved up through the ranks as he proved his battlefield mettle in Haiti and Nicaragua, with the Horse Marines in Peking, in the Pacific Theater of World War II, and in the nightmarish winter engagements of the Korean War.

Fearless and seemingly indestructible, adored by the troops he championed yet forced into early retirement by a high command that resented his "lowly" beginnings and unwillingness to play politics, Puller remains one of most towering figures in American military history. Bestselling military biographer Burke Davis paints the definitive portrait of this extraordinary marine hero.

What listeners say about Marine!

Ingot this on a whim, I found myself stuck in the story and enjoyed hearing about a man who truly knew the suck.

I would rather ANYONE else have read this book. It almost makes it impossible to listen to.

Once a Marine Always a Marine

Overall very inspiring as does show that in the Corps the real guys who get it down are the enlisted, really appreciated how Chesty always took care of his men! Something I learned as a NCO at a young age also

inspiring story of a great man

I've heard his name many times, this was an eye-opener about the reasons why he is a true legend.

As a Marine, this is fully inspiring and truly a great book. Growing up with a Marine grandfather who spoke of Chesty often… this really was a nice filler for all those stories I remember so fondly. Thank you. Semper Fi!

Wonderful book about an extraordinary man.

Narrator was excellent. It's too bad the military establishment held back his tributes & forced him to retire for bogus reasons. Book was good until the very end.

Absolutely 💯 great listen. I have listened to many historical , along with many of the classics I have been trying to learn . When I was in school I just went through the process. Now I could carry on a conversation with veterans and lecture speakers. I do a little preaching, this material along with a spiritual perspective ( I have many titles for Chesty “) he was a moral leader ( if you like the military or WW2. I highly recommend the reading is really good chesty has his own voice 🇺🇸

This was a really good story of the life of chesty! I’ve been wanting to read it for awhile.

One of the greatest men to ever live

Good night Chesty!! Wherever you are!! A well told tale of one of the most inspirational men to ever live.

There are many quotes and illustrations from the life of chesty Puller. Learned many things I did not know.