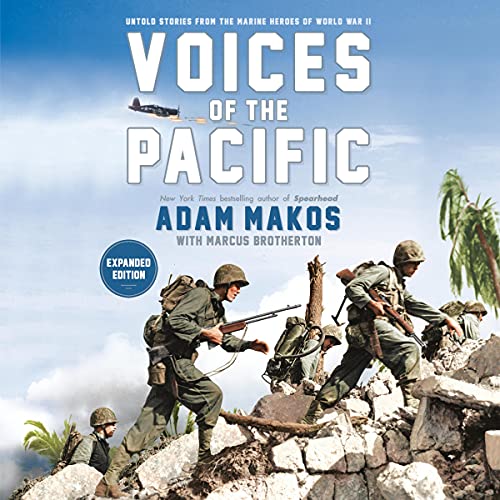 Voices of the Pacific, Expanded Edition

From the best-selling author of A Higher Call and Spearhead comes an unflinching firsthand chronicle of the heroic US Marines who fought on Guadalcanal, Peleliu, Iwo Jima, and in other pivotal battles during the Pacific War, a classic book now expanded with new stories from the flyboys overhead and the home front at war.

Following 15 Marines from Pearl Harbor, through their battles with the Japanese, to their return home after V-J Day, Adam Makos and Marcus Brotherton have compiled an oral history of the Pacific War in the words of the men who fought on the front lines. With vivid, unforgettable detail, these Marines reveal harrowing accounts of combat with an implacable enemy, the camaraderie they found, the friends they lost, and the aftermath of the war's impact on their lives.

With unprecedented access to the veterans and unpublished memoirs, Voices of the Pacific presents true stories of heroism as told by such World War II veterans as Sid Phillips, R.V. Burgin, and Chuck Tatum - whose exploits were featured in the classic HBO miniseries The Pacific - and their Marine buddies from the legendary 1st Marine Division.

What listeners say about Voices of the Pacific, Expanded Edition

BUY If You Love "The Things Our Fathers Saw..."

Adam Makos, with Marcus Brotherton's contribution, has a masterpiece in this book. This is the expanded edition of the book that has been out for several years. What a gem. The first hand accounts are harrowing, heartbreaking, and completely inspiring. There is no way not to be riveted. Nothing compares to the real stories from individual men, some names recognized and some not known to readers. And having the regular and now the expanded edition, this is an extra special gift. May we never forget the sacrifice.

To me it was confusing in trying to keep up with the characters in the way this book is laid out by using one narrator stating their names and another narrator being the voice of all of the characters. A audio book using this kind of format needs a voice for each character. I have enjoyed other books by Mr. Makos tremendously. This one let me down.

This book was amazing! Highly reccomend for any and everyone! love the history and the Facts.
God Bless the USA
Semper Fidelis

Terrible story, performance and narrative.
I was disappointed in this selection.
The snippet was misleading.

At first I wasn’t sure I’d enjoy a book like this. But I became to understand the genius behind it. I got to listen to answers from people that were there. Great read.

This should be a mandatory read in all schools!!!

We have lost something in this country. In the way we live now. Thank you to all that have served. Thank you for your sacrifice.

This book is a huge letdown. It's filled with amazing stories but the narrator is just underwhelming. He makes no attempt to speak with any emotion, it feels more like he's reciting a science textbook.

Really enjoyed most of the stories but it was very difficult to keep track of the soldiers. Overall worth the read.

I loved this book and the people that it is about, they really were the greatest generation, so many died and so many who gave there life and freedom isn’t free.

Doesn’t get much more to the source than this book. I like that about it. At times it doesn’t flow very well because it can go from person to person at times.

My only complaint is with the performance, but not the narrator. This is one of those books that could have used a couple more to differentiate the people just a little bit more.