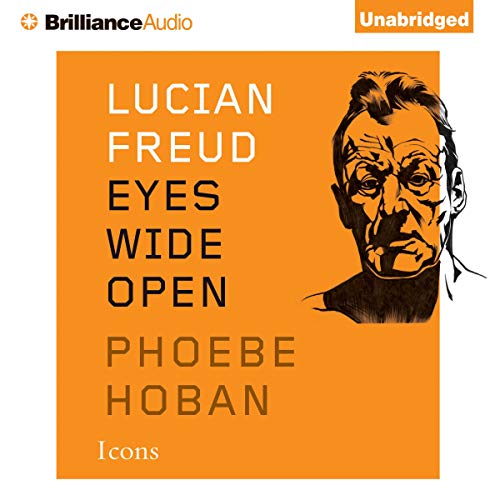 By: Phoebe Hoban
Narrated by: Laural Merlington
Try for £0.00

Phoebe Hoban, author of definitive biographies of Jean-Michel Basquiat and Alice Neel, now turns her attention to Lucian Freud, the grandson of Sigmund and one of the greatest painters England has produced. Lucian Freud: Eyes Wide Open is the first biography to assess Freud’s work and life, showing how the two converge.

In Hoban’s dramatic and fast-paced narrative, we follow Freud from his birthplace in Berlin to London, where he fled with his family in the 1930s, and then to Paris, where he mixed with Picasso and Giacometti. He led a dissolute life in Soho after the war, gambling and womanizing with fierce energy. He painted his wives nude, his children nude, himself nude. He married twice, had an uncountable number of children, and kept working through it all, painting everyone from close friend and rival Francis Bacon to Kate Moss and Queen Elizabeth. He sometimes spent years on a single painting, which could require hundreds of hours of sittings. However various his subjects, his intent was always the same: To find and reveal the character hidden within by means of his intense visual imagination.

Along with its startling biographical revelations, the great thrill of Lucian Freud: Eyes Wide Open is the way Hoban deconstructs the art itself - its influences, models, and technique - to show how Freud reproduced reality on the canvas while breaking down the illusion that what we see is real.

What listeners say about Lucian Freud

A fascinating insight into the - not unfamiliar - life story of a fascinating artist, slightly let down in the audio version by the narrator's valiant, but slightly comical, attempts at Cockney(Mockney?) accents, which ended up sounding a bit like Dick van Dyke in Mary Poppins...

great incite to a great artist

was a great book. lots of good information, and the way it was presented made it very enjoyable to listin to.