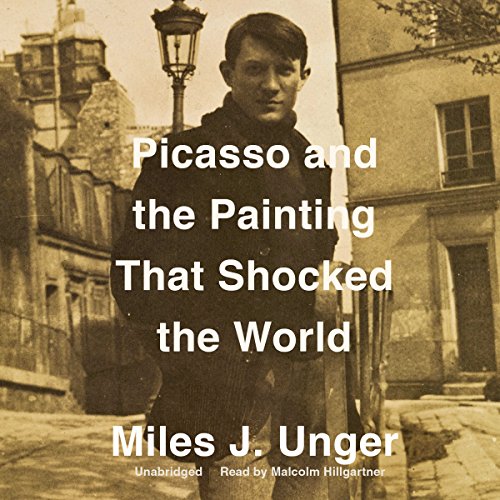 Picasso and the Painting That Shocked the World

By: Miles J. Unger
Narrated by: Malcolm Hillgartner
Try for £0.00

When Picasso became Picasso: the story of how an obscure young painter from Barcelona came to Paris and made himself into the most influential artist of the 20th century

In 1900, an 18-year-old Spaniard named Pablo Picasso made his first trip to Paris. It was in this glittering capital of the international art world that, after suffering years of poverty and neglect, he emerged as the leader of a bohemian band of painters, sculptors, and poets. Fueled by opium and alcohol, inspired by raucous late-night conversations at the Lapin Agile cabaret, Picasso and his friends resolved to shake up the world.

For most of these years Picasso lived and worked in a squalid tenement known as the Bateau Lavoir, in the heart of picturesque Montmartre. Here he met his first true love, Fernande Olivier, a muse whom he would transform in his art from Symbolist goddess to Cubist monster. These were years of struggle, often of desperation, but Picasso later looked back on them as the happiest of his long life.

Recognition came slowly: first in the avant-garde circles in which he traveled, and later among a small group of daring collectors, including the Americans Leo and Gertrude Stein. In 1906, Picasso began the vast, disturbing masterpiece known as Les Demoiselles d'Avignon. Inspired by the groundbreaking painting of Paul Cezanne and the startling inventiveness of African and tribal sculpture, Picasso created a work that captured and defined the disorienting experience of modernity itself. The painting proved so shocking that even his friends assumed he'd gone mad. Only his colleague George Braque understood what Picasso was trying to do. Over the next few years they teamed up to create Cubism, the most revolutionary and influential movement in 20th-century art.

This is the story of an artistic genius with a singular creative gift. It is filled with heartbreak and triumph, despair and delirium, all of it played out against the backdrop of the world's most captivating city.

Informative without being dry

The author clearly describes the context (e.g. bohemian Paris, the people, the politics of the art scene) for how the painting came about, rather than just describing why it's so important

Invaluable, a must read for all artists whatever your background. I find Picasso intriguing, even more so after reading this.

The self-indulgence of it all

I was looking forward to reading this biography of Picasso... I live an hour from his home city and have immersed myself in his art, which I consider brilliant at times, and utter ridiculous at other times.
This story confirmed what I suspected, that the man was an arrogant, selfish, self-absorbed, ego maniac. It made it difficult to read about him with any kind of pleasure. The story was also bogged down with so much detail. Two thirds through, I gave up. He is one of the world most renowned artist, but as a man.... Sadly I lost all respect for him.

This story is so cheesy. Very bad writing. Full of hyperboly, presumptions and cringeworty descriptions. "whilst he, that high priest of the religion that is modernism, writhing in his tortured soul whilst creating, godlike, the world of the future" Say no more. 15 min in and im done here. The narrator is good though. No doubt in private he cringed also.

I love cubism and this audio goes into great detail about the process that Picasso and his friends went through to shock the world with cubism.

This was a "page turner." So many Picasso bios gloss over this time (about the first 10 yrs of the 20th century) when it comes to his growth. These are the most important years as they show the making of his genius.

What Unger gets right most is the torment of creation. He includes the many relevant philosophies of creation and painting that existed in Paris at this time - all the while juxtaposed against the very real ideal of the art critic, gallerist and market place.

I was more interested in his artistic life than his sex life which I feel dominated the text too much for me.

I question how the writer discovered so much personal information about Picasso. I think it was historical fiction. That said, I enjoyed the book and found the descriptions of the various works insightful and informative. I did need to stop the audio and go to other print books to see the painting the writer was referring to. This is not a good book for people that do not understand "ARTSPEAK."

The author examines Picasso's early life in Paris, his relationship with the Steins, his competition with Matisse and Cezanne, and the painting that acted as Picasso's "exorcism." I'm not sure if casual art fans will enjoy this book, but I would highly recommend it for fans of Picasso.

I wish there was more!

One of the best audiable books I’ve listened to. It was a wonderful detailed account of Picasso’s rise to fame. I learned so much and my only complaint is that I wish there was more! The research and ties to other people and artists was fascinating, I feel like I have a new understanding of Picasso. Highly recommend!

Picassos life was conveyed on canvas....life with its cuts,scars, triumphs,wars won and lost...mostly won in the studio. This audio book takes you there to witness the gusto, and gore of a life lived apologetically. I didn't want it to end.

All around great story of an artist's life

Great story of an artist's life, and passion for the work itself. Inspiring. It should be read by all.

A fresh look at Picasso’s life and history. The good, the bad and ugly. An inspiration to all painters out there. Live and breathe art he said, don’t be like everyone else ( be yourself!!!)

As an artist who has studied Picasso’s work throughout a lifetime,
I found this to be the most original and incisive analysis of both the Desmoiselles and Picasso’s creative psychology that I have ever encountered. Told with great narrative skill, this story is accessible to layman and expert alike.