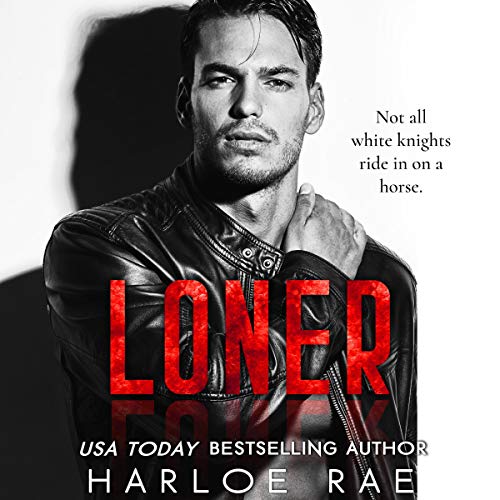 By: Harloe Rae
Narrated by: Wen Ross,Kai Kennicott
Try for £0.00

“Everyone deserves a chance to be rescued.”

That’s the mantra I’m repeating when a well-equipped biker pulls over to save me. One glance at the scowl Crawford Doxe is wearing proves he isn’t impressed with the task. My efforts to change his mind deflate faster than the shredded tire at our feet. But disgruntled or not, my so-called hero still agrees to fix my flat.

I don’t expect to see Crawford again, but he’s suddenly very visible in our small town. Avoiding him would be my preference. That’s not how this story goes. For whatever reason, my daughter finds an ally in the broody mechanic. Denying her is something I do my best to avoid. I can only hope Crawford’s shine wears off before he tarnishes what little trust still exists.

As if the odds are ever on my side.

Commitments are a foreign concept to him. He doesn’t make any promises to try. That should’ve been enough for me to steer clear. It most certainly isn’t. What follows can only be described as a disastrous clash of epic proportions.

But one indisputable fact remains. That lone soul has no plans of opening his heart.

What listeners say about Loner

I was expecting to like this a lot more than I did..

I was drawn in from the hype, description and smoking hot cover. I was honestly disappointed. I REALLY wanted to love this. The male narrator... I’ve listened to him before..but he’s not my cup of tea. He’s tolerable...but he just helped reinforce the cliché of his character. Yes, we get that you’re a LONER Ford, it’s in the freaking title! But it’s mentioned in practically ALL of his internal monologues. And our heroine... I liked her for the most part, her narrator choice was pretty good. But the way she automatically let Ford back after literally showing her spine not 20 seconds prior?! Wtf? His Indiscretion was absolutely abhorrent in how he handled his little meltdown that affected the heroine, but most importantly her 7 year old. I’ve gotten mad at characters, but he took the cake. I’ve never cursed out loud so much. I’m ashamed that this heroine didn’t protect her daughter more when he ‘suddenly’ came to his senses. Hot or not, that fucker needed way more work to get back in her good graces and much more time to be allowed around her daughter. Also, the little confrontation Ford had with his father felt pointless. I really like the idea of this story, but I was just rolling my eyes at so many things. And I am so tired of the ‘pushy best friend’ character pushing things on a heroine. So many books have this, further reinforcing lack of a spine.

The story is fine what I didn’t like was let me rephrase that these narrators are one of my favorites because the way they narrate, they both do their individual characters and that was one of the reasons I bought the book, with that said what happened? They both took a turn but they narrated his part for her and vice versus, don’t take me wrong they were good but what fixed what wasn’t broken? The story was good on itself a bit predictable but good, I did cry at the end so, I guess that makes it ok.

This enemies to lovers was good, the characters are relatable, their conversations felt real with the addition of Millie and the dogs made for some funny moments. Crawford dad was a piece of work, I wanted to shake him at times for being so mean, Keegan was so strong, protective of her daughter, she was an amazing mom. I enjoyed this book.

Between the author using every word in the thesaurus and at least 4-5 adjectives in each sentence this was painful. The performers paused between each sentence so there was no flow. It was hard to follow and became boring.

I enjoyed the narration much more than I did the story.

I'm pretty sure sweet Millie saved the read. She was the highlight of it all.
Didn't really care for Ford and Keegan was ok. Their push and pull got annoying. Their connection was lacking and the only passion I really felt from them was when they were intimate.

Am I the only one who found this book EXTREMELY BORING? I have never not finished a book, but came close on this a few times. The narrative was just ok......¯\_(ツ)_/¯ I don’t know, it could be just me.

I liked the story and the narration was on point. I'm hoping there is more with these characters in the future

Everything about this audio was complete perfection! The story , the characters, the narrators ! I will listen again and again. I loved Loner so much. One of my absolute favorite audios and books of 2020!