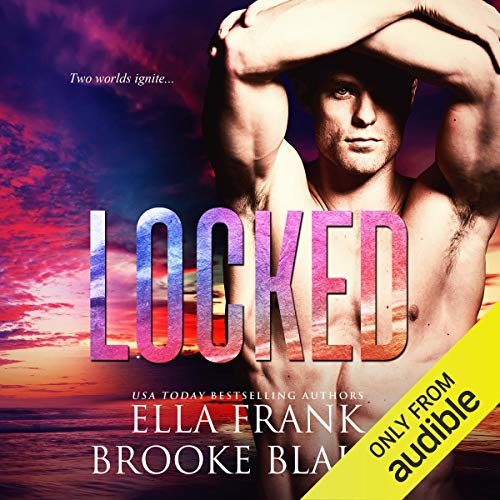 By: Ella Frank,Brooke Blaine
Narrated by: Charlie David
Try for £0.00

The man on Locke's arm has been identified as Dylan Prescott, the sexy new "it" model currently featured in the latest Calvin Klein ads. Sources tell us the men met on the set of Locke's upcoming action film Insurrection 2, and that "they only have eyes for each other."

This is the first public gay relationship for Locke, who came out a year ago, and there has been much speculation on who would finally be the one to catch his eye.

According to multiple eyewitnesses, Locke whisked Prescott away on his private jet for a romantic weekend at Syn, the most exclusive hotel on the Las Vegas Strip. After pictures recently surfaced of the new couple, affectionately named PresLocke, it appears from the possessive way Locke keeps his new beau close that things are heating up.

The world is watching #PresLocke, and we'll be sure to keep you up to date on this budding relationship!

What listeners say about Locked

Smitten by Dyllan and Ace all over again

Was on tender hooks when I finished book1 Ace. was so relieved to get another dose of these boys. sweet funny and so so sexy. even mega stars have sweet sides. over coming hurdles thrown at them. find my self cheering them on that the get their HEA

This is honestly such a fantastic sequel, I loved every minute. Ace and Dylan deal with the aftermath of the previous book with a surprising amount of grace, and even with the reality of Dylan's past coming to light, the two of them only get closer. They deal with their problems and admit when they're acting like jerks. This book gave me so many the, fears, and laughs. I can't wait to see how it concludes in the final book.

If you could sum up Locked in three words, what would they be?

What was one of the most memorable moments of Locked?

When Dylan took Ace to meet his family, the boat ride. Lord I think that between the way this scene was written coupled with the spot on delivery from Charlie David it was one of the most emotional scenes I've ever listened to.

See above for starters. Every fucking thing! He's just amazing. Every word is enunciated perfectly, delivered flawlessly, full of all the emotion and character the author intended.

Aside from the boat scene I'd say the ending.

Wow, just when I thought these two Authors couldn't make these two men any more lovable or realistic, they did just that. As with the first book in this series, Aced, I thoroughly enjoyed how these two men know what they want and are no longer afraid to say so. A couple of times, Dylan thinks briefly that Ace might want to dive head first back into the closet. But Ace quickly rectifies that and reassures his lover that he's sincere.

Frank and Blaine really know how to write an amazing, intricate and detailed romance. Their characters have depth and personality, face the same set backs everyone else does and deal with all of that like adults, which is very refreshing. No angst, none, probably my favorite aspect to this series. Just a fast paced, fun ride with Ace and Dylan as they settle into being together out in the open, and fuck anyone that has a problem with it!

cute story.... but the narrated ... dont seam to make any voice diffrendt between the 2 main chareter... wich is a shame

The sweet and steamy bits from the first book of the series continue on in this one. Ace and Dylan are getting to know each other better. The intimate moments between the characters are where Brooke Blaine and Ella Frank shine. These two writers really know how to make readers fall in love with their characters.

Charlie David"s narration once again does a wonderful job of adding dimension to the masterfully created characters.

Locked in love with these two

Love like this makes everyone swoon. I am dying to find out how everything becomes a happily ever after!

This is perfect I just love Ace and Dylan

love these books by Ella Frank and Brooke Blaine. Any book of theres is a must read. Charlie David is my favorite narrator

Oh how I adore Ace and Dylan!!! This continues their relationship through the ups and downs of everything thrown at them for being together. It was so romantic, sweet, touching, and just gave me all the feels!!! And Charlie David was just perfect and brought all those feelings front and center. He narrated this spectacularly!!!

My only complaint is that sometimes it’s hard to differentiate between the characters voices, but the narrator was still very good!

so it took me awhile to read this series after the temptation series I was not sure I could handle it but I love love love this series so far tears shock disgust all emotions on this series.love it

Love Ace and Dylan.. I Cannot get enough of this couple. They are so cute I can't stand it. I will listen to this story again.