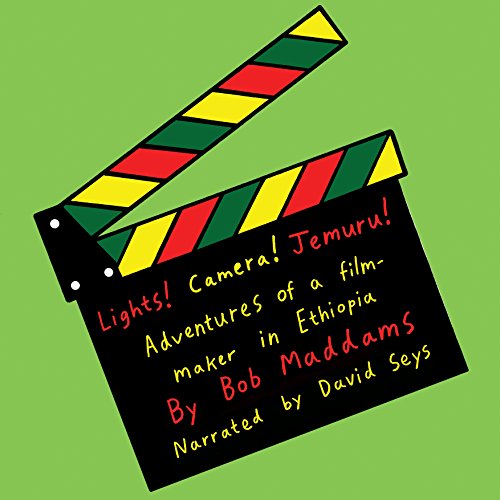 Lights, Camera Jemuru - Adventures of a Film-Maker in Ethiopia is the remarkable true-life story of a high-flying adman who swapped his expense account lifestyle in London to go and teach in a back-street community film school, Gem TV, in Addis Ababa. Bob Maddams spent years living and working in Ethiopia and filming took him and the Gem TV filmmakers all over the country; from shanty towns and famine feeding stations to the rock hewn churches of Lalibela and the source of the Blue Nile. Each encounter stripped away another layer of the Live Aid image of Ethiopia to reveal a country of staggering natural beauty, Biblical history, diverse ethnic groups, and a culture as rich as the people are poor. But most of all Lights, Camera, Jemuru is the uplifting story of Gem TV, the young filmmakers whose films are transforming the lives of ordinary people all over Ethiopia. Sometimes funny, often sad, and always moving, the story portrays this most ancient of countries as it struggles to define its place in the modern world. While for the 400 million people all over the world who watched Live Aid and wondered whatever happened to Ethiopia, it provides a fascinating answer.

This was really a good book about an Englishman who directs commercial, and who had his life changed by going to Ethiopia. It’s a fascinating overview of his experiences, as well as a great deal of history and culture of Ethiopia.