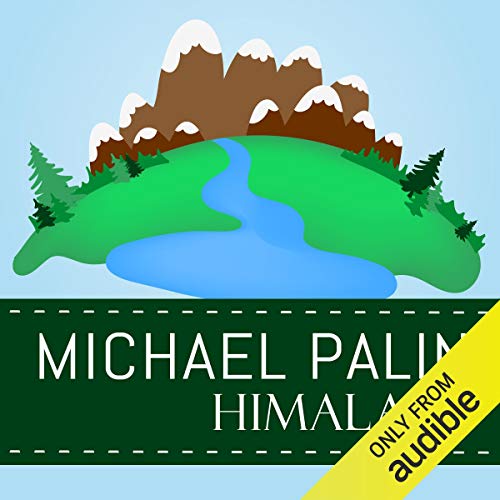 In his most challenging journey to date, Palin tackles the Himalayas, the greatest mountain range on earth. It is a virtually unbroken wall of rock stretching 1,800 miles from the borders of Afghanistan to south-west China. Penetrated but never conquered, it remains the world's most majestic natural barrier, a magnificent wilderness that shapes the history and politics of Asia to this day. Having previously risen to the challenge of seas, poles, and deserts, the highest mountains in the world were a natural target for Michael Palin.

In a journey rarely, if ever, attempted before, in 6 months of hard traveling Palin takes on the full length of the Himalaya including the Khyber Pass, the hidden valleys of the Hindu Kush, ancient cities like Peshawar and Lahore, the mighty peaks of K2, Annapurna, and Everest, the bleak and barren plateau of Tibet, the gorges of the Yangtze, the tribal lands of the Indo-Burmese border, and the vast Brahmaputra delta in Bangladesh. He also passes through political flashpoints including Pakistan's remote north-west frontier, terrorist-torn Kashmir, and the mountains of Nagaland.

What listeners say about Himalaya

Where does Himalaya rank among all the audiobooks you’ve listened to so far?

I have only ever listened to this one

What was most disappointing about Michael Palin’s story?

It was a bit rushed. One was left wanting more detail on just about everything ( Geography, history, current conflicts, landscapes). I also did not like the fact that each day was announced numerically - it interrupted the narrative - especially as some days he didn't have much to say.

No. We used it for traveling a long distance and divided it into two sessions.

It was an enjoyable experience. Thank you.

More of the same Genius

You don't need to say alot more than, Palin, Travel, Genius. Once again Michael Palin makes you feel like you are travelling with him.

Michael's observations were balanced, colourful to imagine and a huge pleasure to listen to. I have visited some of the places myself as a Pakistani and it was a trip down memory lane for me. I will definitely listen to it again and recommend it highly.

Having found Full Circle aged 13 and not looked back since I think it’s hard to find a more dedicated fan of Michael’s work and travels. Himalaya is a masterpiece in immersion and the truly high and honest lows one faces when travelling. Yes of course you get the comfort of Michael’s narration but you really do get the best of both worlds. He informs but does so sparingly, never overwhelming the listener with endless fact checking ‘man splaining’ points. He’s so humble and this clearly is absorbed by the people he meets and frankly he’s the perfect travel partner!
I feel like it could have been twice the length and I’d have been happy with it. Having been to Nepal a few times I feel like I wanted more about the people of that country and Bhutan. Pakistan and India are so often documented but Nepal and Bhutan not so. I think this is where Michael really fell in love with the Himalaya journey.
Enjoy, chill out and savour this wonderful man’s work. He’s such a natural at it, very few are.

Immerses you in his journey

Brilliant narration... Never tire of his voice and delivery and content.... With his humorous take on all he sees

Well done Michael Palin, I enjoyed listening to this so much that I have now listened twice.

A great listen! Palin’s descriptions are very immersive, and the way he recounts his journeys - and even more so the people he meets along the way - meant I felt I was journeying alongside him. Excellent narration too, varied and interesting easy-to-follow. A very entertaining account of a really interesting journey.

I have got into the habit of listening to these books contemporaneous with watching the DVDs. Himalayas was my favourite series so this has been a real treat.

Combination of a good tale and excellent Naration.

Michael Palin has again read an excellent travel log. He tackles every journey with such enthusiasm that it comes across in his travel log and narration which makes for great listening.
It also works well on repeat listening.

This book is written with such beautiful, sensory descriptive words that I felt like I was there. I have such a yurning for travel and as it is not currently possible, this book took me across the Himalayas in my mind. thank you

Beautifully told audiobook by Michael Palin of Monty Python fame. Micheal continues his series of travel logs telling of the history, the people and culture of the Himalayas, his experiences as he travels around, the difficulties he encounters and descibes perfectly the beauty so few people have seen in the West.

This would also be perfect to go along with the DVD version as well. I would also recommend his other series of audiobooks such as his first, Around The World in 80 Days and Pole to Pole, if available.

It took me far away from home

This is the best audiobook I have purchased so far, hands down. I had always liked Michael Palin from his Python days, but this was a delightful new side to him. He conveys his great excitement and inquisitive nature in all circumstances of his travels. He is sensitive and humble, and genuinely enthralled with his surroundings. The trip's itinerary was beyond fascinating in itself - from Pakistan to the foot of Everest to Lhasa to Bhutan - his accounts of his experiences are culturally sensitive, exquisitely detailed, and perfectly read.

When I think of a Himalaya trek, Kathmandu and some of the more familiar places come to mind ... but in this book, he also takes you off the beaten path and into some remote and vastly interesting places, experiences and cultures. He reveals sides of Pakistan and other politically 'controversial' countries in very different and fascinating light and perspective. He is able to describe everything - the people, the activities, the lodging, the food, the mechanics of the trip - in fantastic detail. If you've ever longed travel to the Himalaya, this book may be as close to actually getting there without having to board a plane. I will definitely repeat this listen!

For me, the best chuckle of the tale came as Michael Palin met up with some other trekkers and a woman stopped him, realizing he looked familiar, and then exclaimed, "Yes .... that's Eric Idle!!!" Palin's response was delightful! (You'll have to listen!)

need to read this in paper copy

this is a story which could be great, however the audio format is not the best way to experience it. the book would be so much beter if there were maps and some pictures to go along with the text. just cant substitute for that with this audio in my opinion. well done for what is possible in this format.

A great listen, full of so much detail that it still fascinates on the third listen. Lots of wry humour and interesting background information on the places visited.

There is something delightful about traveling with Michael Palin. You get the impression that nothing much upsets him and that he is going to be pretty happy no matter what. That makes his observations about travel easy and enjoyable to listen to. One suspects that there is not even a little angst in his psyche.

I found this book more interesting than Pole to Pole or Sahara, although I've enjoyed them all. You really can't go wrong with any of them, although I think this is the best of the lot.

Palin does it again!

What did you love best about Himalaya?

Palin is so direct, honest and revealing about his feelings and reactions to new experiences. He is a avid traveller - boldly going places that I will probably never be able to go to and giving me the feeling I have been there too.

What other book might you compare Himalaya to and why?

Palin is so much "happier" than Paul Theroux's travel books - Palin's enthusiasm to "be going" and to meet and visit with new people is the BEST of travel narrative!

No one reads a books quite like the author. Palin has a great voice.

It often makes me laugh. Palin is a funny man. He is the person you want around in times of trouble - flexible, intently interested in "the present", letting go of plans that will no longer work. Even when talking about things that are being lost, polluted, or ruined the sadness is offset by the simple and yet powerful human adaptations to difficult situations.

Palin's books, movies and audio books are a wonderful way to see the world in the company of a happy, good natured traveller!

Another triumph of a Palin travelogue

Every bit as good as the longer journeys. I’ve yet to see the film series, but the books as read by the author are delightful and enlightening.

Adventure at it's Best

This is just a wonderful travel story. I listen in the car on my daily commute to work and listening to this tale helps make driving a breeze. The descriptions are vivid and the author's British humor is delightful. Audio quality is great and having the author actually narrating his own book adds a touch another reader could never have. The Himalaya region is a vast, diverse, and exremely fascinating area of our globe and this book helps to make you feel that you are along on the adventure with the author. I highly recommend it.