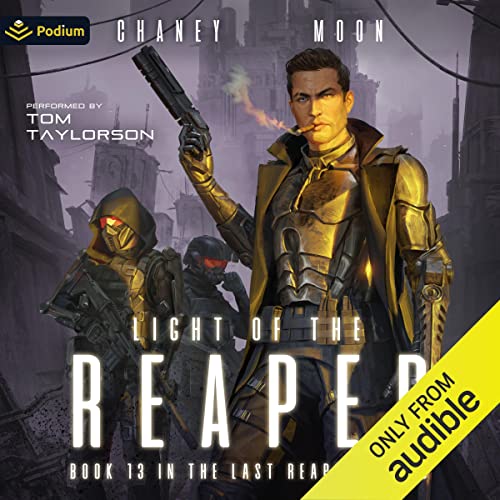 Light of the Reaper

When a man falls, he either gets back up or stays down and dies.

Caught in a failing starship, surrounded by a galactic scourge like no other, Halek Cain and his friends refuse to quit. In fact, they’re about to go on the offensive.

Cain must put the hammer down and silence his most bitter enemy from stealing the true secret of the Darkness. But staying alive and getting the job done has never been harder.

Join the last Reaper as he reassembles his dream team, slips into his familiar Archangel gear, and starts a planet-to-planet romp for survival.

It's time to pick up a weapon and fight for your right to live.

What listeners say about Light of the Reaper

Best book yet, so flag Cain finally got back together with all the gang to kick butt.

Story and character grows on you...

Hate to say it, but I've gotten to like these characters. At first, some were annoying, but that changed somewhere around book 4 or 5. New books seem slow to roll out, but that's just me, I guess.

The Reaper seems to be developing

I like following the increasingly complex trouble that always finds the Reaper. X1 is a great sidekick

As always a great listen! So glad to see Aleese grown up! Reunions are awesome. Thanks Tom for another excellent job!

Halek Kane is a self-centered narcissist

It was my hope that the techniques for drama would grow more other centered, but the self righteous nature of Kane becomes odious and extremely tedious. This is an atheistic rant filled with rage and hopelessness, fantasies that seduce the listeners to meaninglessness because there is no fear of God, the creator. I could not finish this because selfishness in not heroic.