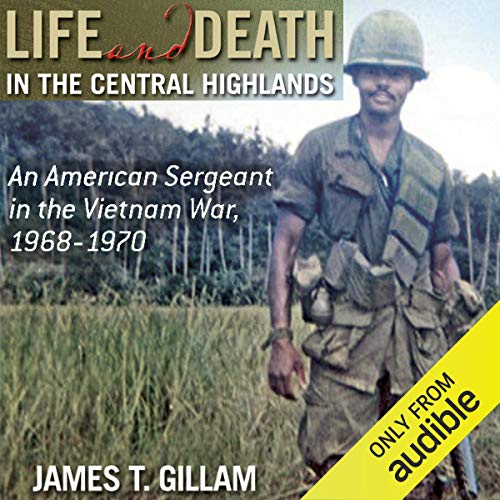 Life and Death in the Central Highlands

In 1968 James T. Gillam was a poorly focused college student at Ohio University who was dismissed and then drafted into the Army. Unlike most African-Americans who entered the Army then, he became a Sergeant and an instructor at the Fort McClellan Alabama School of Infantry. In September 1968 he joined the First Battalion, 22nd Regiment of the 4th Infantry Division in Vietnam. Within a month he transformed from an uncertain sergeant-who tried to avoid combat-to an aggressive soldier, killing his first enemy and planning and executing successful ambushes in the jungle. Gillam was a regular point man and occasional tunnel rat who fought below ground, an arena that few people knew about until after the war ended. By January 1970 he had earned a Combat Infantry Badge and been promoted to Staff Sergeant.

Then Washington's politics and military strategy took his battalion to the border of Cambodia. Search-and-destroy missions became longer and deadlier. From January to May his unit hunted and killed the enemy in a series of intense firefights, some of them in close combat. In those months Gillam was shot twice and struck by shrapnel twice. He became a savage, strangling a soldier in hand-to-hand combat inside a lightless tunnel. As his mid-summer date to return home approached, Gillam became fiercely determined to come home alive. The ultimate test of that determination came during the Cambodian invasion. On his last night in Cambodia, the enemy got inside the wire of the firebase, and the killing became close range and brutal.

Gillam left the Army in June 1970, and within two weeks of his last encounter with death, he was once again a college student and destined to become a university professor. The nightmares and guilt about killing are gone, and so is the callous on his soul. Life and Death in the Central Highlands is a gripping, personal account of one soldier's war in the Vietnam War.

Number 5 in the North Texas Military Biography and Memoir Series

“Jim Gillam experienced real combat in his Vietnam tour. His stunning accounts of killing and avoiding being killed ring true. Although wounded several times, Jim did not leave the field for treatment in a field hospital, so he never generated the paperwork for a Purple Heart or two or three. Although he would be appalled at the thought, his attention to duty was ‘lifer' behavior, a concern for the well-being of his squad that represents the best of NCO leadership in any army.” (Allan R. Millett, author of Semper Fidelis and coauthor of A War to Be Won)
“[Gillam] looks back on his experiences of Vietnam not solely as a participant in the war, but also with the critical eye of a trained historian. . . . [He] uses an impressive array of after action reports, duty officer logs, battlefield reports, and other primary source material, to back up and reinforce his recollections.” ( Journal of Military History review by James H. Willbanks, author of The Tet Offensive)
“Gillam, a ‘shake and bake' sergeant, presents a good account of small unit infantry action during the war. He is very good at explaining the weaponry, tactics, and living conditions in the field.” (James E. Westheider, author of The African-American Experience in Vietnam)

What listeners say about Life and Death in the Central Highlands

One of the best memoirs of the conflict if listened too from the heart and no glossing over .

A sobering and hard hitting memoir from 1969/70. Really engrossing with superb detail , superb for anyone wanting to know what that war was like for the Infantry.

I've listened to lots of Vietnam War factual books, but this book was probably the most personally candid, detailed and frightening one I've heard (so far) and that's not to undermine all the others, where I developed a great respect for all the authors/ warriors. I'm left with total admiration, respect and pity for James, that life's events put him in such a very dark, prolonged terrifying situation, but thank goodness he came through it and has deservedly been able to live a happier and fulfilling life. The first world war adage of Lions led by Donkeys in some cases springs to mind in the book, in an attritional war the USA "declined" to win-a very thought provoking and interesting choice of words.

When the passage in the book is describing having to beat a person to death in a pitch black tunnel with you bare hands (a person that very well may have actually been a woman), or having to kill a person face to face with a knife in a deadly hand to hand combat situation, what is being described are moments of pure adrenaline filled stark terror and extreme aggression, followed by equally powerful moments of revulsion and remorse - it is NOT appropriate to read this in a straight deadpan delivery like some emotionless machine.

What makes this book so unique and interesting is that it is the story of a well-educated black NCO. That makes it from a rare perspective when it comes to Vietnam memoirs. It is written from a very honest personal viewpoint on the one hand, but also in a very scholarly way on the other. I urge you to read the book as the guy reading this version ruins it.

A great book! and with the authors post war education in history, he is able to give you both the little picture as the man on the ground, and the big picture with data, research, and archive access

narration was a little stale but the story was told. a great story for a hard worker.

Spends more time trying to explain the war from a scholarly viewpoint with facts and figures interspersed with a storyline that constantly reinforces the racial divisions in Vietnam instead of just focusing on the actual story. Forget the facts and figures, just tell us the story of your tour. The political, social and societal issues of that time do not interest me. Author needs to leave the academia in the classroom.

What did you love best about Life and Death in the Central Highlands?

The narrative, (in between the facts & figures; and pedantry), was excellent. Very vivid and "up close." The narrative is more personal than in most books about Viet Nam. He described feelings and situations so well, I thought I was there. His description of the smells was especially engrossing- (Gross?) I had heard about the rotten fish head rice sauce, now I have a better idea what it really was about.

He seems to be honest and laid it out, no matter how it came down. His problems with officers, especially. It, also, showed how hard it must be to be an officer in a war; having to make all the right decisions and not being able to. It gave a good view of the army "caste system," as he described it.

A good, well researched book, based on actual fact that seemed not to have a political agenda. It cut through an experience that is, often, seen through the lens of politics. It just told the story of what the life of a grunt was like. He was an intelligent, educated person thrown into a maelstrom that made anything, but staying alive, superfluous.

What other book might you compare Life and Death in the Central Highlands to and why?

It was a bit stilted and monotone. Otherwise good narration.

This book is missing the clichéd being chased by a water buffalo or being spit upon story. These two events seem to be in every first person account of Viet Nam I have read/listened to. He is a little pedantic and the statistics where not that interesting. Although, he did tie them nicely to the narrative; which made them more interesting.

The story was well told albeit at a staccato rate by the voice Actor. The book began with a little rhetorical racial commentary by the author; however as the book developed it settled into a factual if dispassionate at times account of some rather horrific events survived by the author. All in all, it was a very intriguing story that was well told and it expressed not only the fortunes (or unfortunes) of war but the personal experiences of the author that seemed to go above and beyond unfair at times, even after he departed Vietnam.

I really enjoyed this book. I felt so sad the author was so poorly treated by civilians upon his return home from doing his duty in Vietnam. it's hard to understand why people could not understand the author was drafted and had no choice but to serve in a war no one wanted to be involved in at the time. I salute the author for his service and his honesty. The realism and detail are amazing. Thank you sir.

A unique viewpoint. A must read or listen. Never heard such gut wrenching stories told so honestly.

loved the story of a true man's man. His story of war leaves you stunned.

This is one of the most compelling stories that I have ever heard, and it was so good I listened to the entire 9 hours in one sitting. Sergeant Gillam's story is a roller-coaster of training, fighting, despair, and post-trauma recovery. He is also a true scholar and in each chapter provides the historical context of battles and events before going into his personal experiences. Sergeant Gillam-now Professor GIllam-is also an excellent storyteller and describes the battles and conflicts in the most lucid and realistic ways. The narration of this book is also excellent and is never boring or tiring. This man is not only a humanitarian and hero, but an intellectual and a scholar, and his harrowing memoir is amazing to say the least.

Sgt Gillam does very well articulating his story. I thoroughly enjoyed this book. Probably the best story on Vietnam I've heard yet. The narration is alright. I just completely loved the content. I'd consider listening to it again. 5 stars.

great book! enjoyed the history and politics that surrounded the war. always love reading about the courage of the American military

By far one of the best books on the Vietnam experience from a grunt perspective. The narrator added value to this book experience.