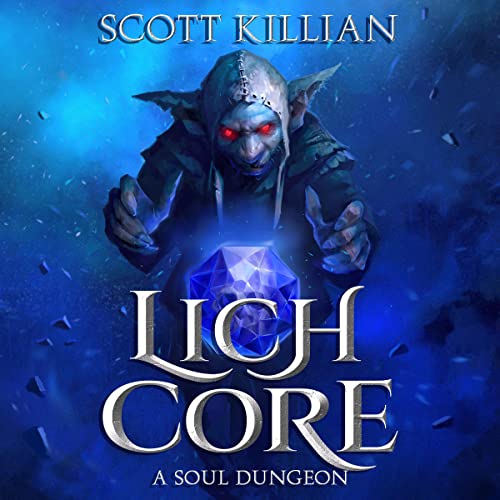 By: Scott Killian
Narrated by: Christopher Harbour
Try for £0.00

Lich is the newest Dungeon Core to grace the world. But he doesn’t conform to the usual four energy types—nor Air, nor Earth, nor Fire, nor Water. Instead, he is a Soul Core. Glimpses of his previous life haunt his dreams but offer clues to solving the mystery of his bizarre magical affinity. Memories of an undead city, burning light, and an order of terrible crusaders fill his thoughts.

Accompanied by his dungeon guide, Nettle, a bone sprite who doesn’t take her job too seriously, and Baxter, a gheist with a flair for the dramatic, Lich must navigate the trials of his new existence. Expanding and growing beneath a decrepit graveyard, he creates eldritch creatures and twisted traps for unsuspecting adventurers.

Unbeknownst to the Dungeon Core, a sinister force from his past has set its sights on capturing him for an ancient ritual—a ritual that needed a fifth type of Dungeon Core to succeed.

What listeners say about Lich Core

too many characters povs

while interesting the story is hard to follow as the point of view switches between characters constantly and in doing so makes reveales have next to no impact compared to if they had been built up more instead be straight up show to us.

MC has not memory so he acts like a child. He is easily tricked by an annoying character who attaches themselves to him. Which means at the very start it loses a ton of control and can’t be trusted to be its own character.

It's good but it's ending just needed something mo