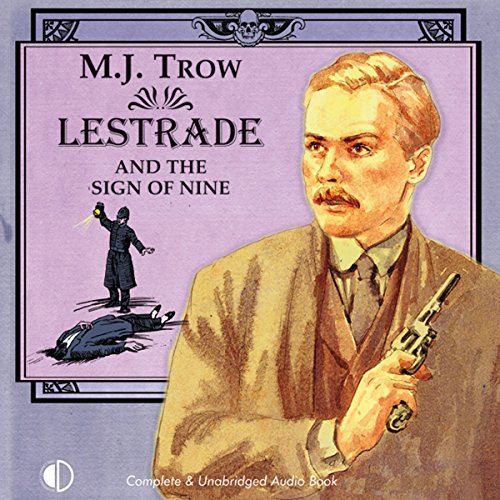 It is a puzzle that has faced Scotland Yard from the beginning - whose was the limbless body found among the foundations? And in the murderous world of Sholto Lestrade, one question is invariably followed by another - what do a lecherous rector, a devious speculator and a plagiarist novelist all have in common? Answer: they're all dead - each of them with a bloody space where his head used to be.

And six others are to join them before our intrepid inspector brings the perpetrator to book. Lestrade braves haunted houses, machine-gun bullets and two Home Secretaries in his headlong hunt for the truth.

What listeners say about Lestrade and the Sign of Nine

Story and performance excellent. I accept story reflects a direct time however felt it was unnecessary for writer to use racist language.

I have read a few of this series and while they were all good this was the funniest. There are so many comic moments and puns slipped into the text that even on a second or third listen you'll find new things to smile or laugh at. The actual story sees Lestrade start out by shooting himself in the leg and then, as usual, he and those around him pick up a series of other injuries throughout the book. There are lots of murders, lots of excellent accents and a fair few twists. The narrator is also the author and unlike some memorable others this isn't out of vanity. He genuinely reads the stories very well.

the bodies mount up

another good story from m.j.trow.
a puzzling investigation for lestrade to figure out literally as a piece of paper with a drawing is found near every body.
as in previous books a few people of the time crop up, the real ones being wilkie Collins and William morris whilst the literary Sherlock holmes and dr Watson appear too.
well written, with funny bits, and performed by m.j. trow I am loving this series.
recommend.

This could have been a very entertaining Victorian detective farce with a chance to chuckle at Holmes for a change, but the good humour was spoiled early in the listen by scattered, weaker and shabbier lines playing off ethnic stereotypes and mild homophobia (Holmes: "We're looking for two men; Watson: Speak for yourself, sir!") ; THEN the author really crossed a line in the last 30-45 minutes with a denouement dependant on men in blackface, frequently referred to as "coons" and another word I won't reproduce. This was set in Victoria England where such language and attitudes would have existed, but this is not a work of literary realism -- and I saw no social satire as the point of the situations - If the author was attempting satire, he wasn't successful in those parts.

Narration: I was prepared to like the author's style because he brought so much life to the voices, that is, if he slowed down and used a decongestant rather than sniffling through the last quarter; however, I could not support the author of such humour by purchasing more of his work.