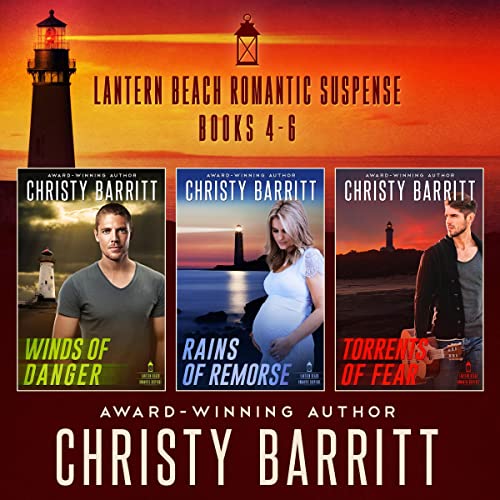 Books four through six in the exciting Lantern Beach Romantic Suspense series are all bundled together now for easier listening!

Wes O’Neill is perfectly content to hang with his friends and enjoy island life on Lantern Beach. Something begins to change inside him when Paige Henderson sweeps into his life. But the beautiful newcomer is hiding painful secrets beneath her cheerful façade.

Police dispatcher Paige Henderson came to Lantern Beach riddled with guilt and uncertainties after the fallout of a bad relationship. When she meets Wes, she begins to open up to the possibility of love again. But there’s something Wes isn’t telling her - something that could change everything.

As the winds shift, doubts seep into Paige’s mind. Can Paige and Wes trust each other, even as the currents work against them? Or is trouble from the past too much to overcome?

A stranger invades her home, leaving Rebecca Jarvis terrified. Above all, she must protect the baby growing inside her. Since her estranged husband died suspiciously six months earlier, Rebecca has been determined to depend on no one but herself.

Her chivalrous new neighbor appears to be an answer to prayer. But who is Levi Stoneman really? Rebecca wants to believe he can help her, but she can’t ignore her instincts.

As danger closes in, both Rebecca and Levi must figure out whom they can trust. With Rebecca’s baby coming soon, there’s no time to waste. Can the truth prevail...or will remorse overpower the best of intentions?

The woman lingering in the crowd can’t be Allison...can she? Because Allison was pronounced dead six years ago.

Musician Carter Denver knows only one person who’s capable of helping him find answers: Sadie Thompson, his estranged best friend and someone who also knew Allison. He needs to know if he’s losing his mind or if Allison could have survived her car accident.

Could Allison really be alive? If so, why is she trying to harm Carter and Sadie?

As the two try to find answers, can Sadie keep her feelings for Carter hidden? Could he ever care for her, or is the man of her dreams still in love with the woman now causing his nightmares?