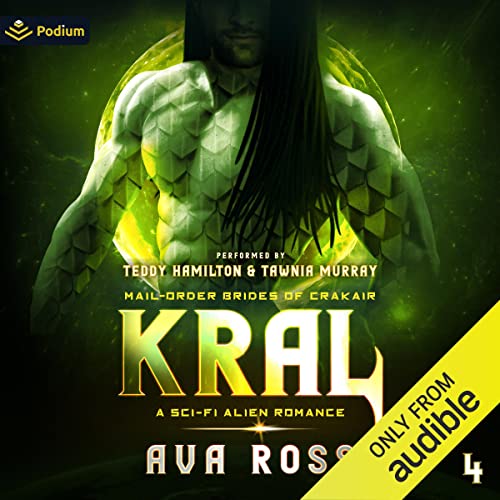 By: Ava Ross
Narrated by: Teddy Hamilton,Tawnia Murray
Try for £0.00

A stoic Vikir warrior meets his match in a spunky Earth woman determined to show him what he's been missing.

After she's kidnapped on her way to the planet, Crakair, Mila's not sure she'll ever meet her arranged mail-order alien match. Until Kral falls - literally - on top of her during his heroic rescue mission. Who wouldn't be attracted to a gruff, scaly green alien doing all he can to save her from the bad guys? But with space stations and ships exploding around them, it soon becomes clear someone is determined to make sure she and Kral never reach Crakair.

Kral has settled into his role as Kral the enforcer and Kral the loner; the person he had to become after his father was killed and he was forced to assume leadership of his clan. He signs up for the Selection, never expecting to develop feelings for his Earthling female match. Despite the danger they're in, she makes him laugh and shows him that life doesn't always have to be serious. But with an enemy chasing them across the galaxy, Kral will have to tap his Vikir warrior skills to protect his Earthling bride.

Kral is book four in the Mail-Order Brides of Crakair series, but it can be enjoyed as a standalone.

What listeners say about Kral

Best of the series so far (in order)

Much more details, twists and turns in this book. I have enjoyed the whole series so far, however I would say that this has been the most relatable in regards to Mila. Teddy Hamilton is great, how ever tawnia murrey is certainly no actress.

Let me start by saying where is the next book in series Wulf? An example of it was provided after the end of Kral but I could not find it. I really like this series and it would be nice to have more diversity in several aspects. Teddy and Tawnia both do a great job and find bringing out the humorous side of characters refreshing. Now to find the next book somewhere.

This story was a perfect combination of everything. I definitely recommend it. The story has suspense, thrills, heroics, love, romance and wonderful ending.

another tiny executed performance and book

loved it. the same actors in the whole series so you know their talent is on point.

This is hands down my favorite book in the series. The perfect blend of adventure, mystery, romance and suspense. At this point I'M almost in love with Kral.

The funny miscommunication between the H and h were my favorite part, especially the nose dive into the bathtub scene. So funny! This book was a nice mix of action, romance, and comedy. I am enjoying this series and looking forward to book four.