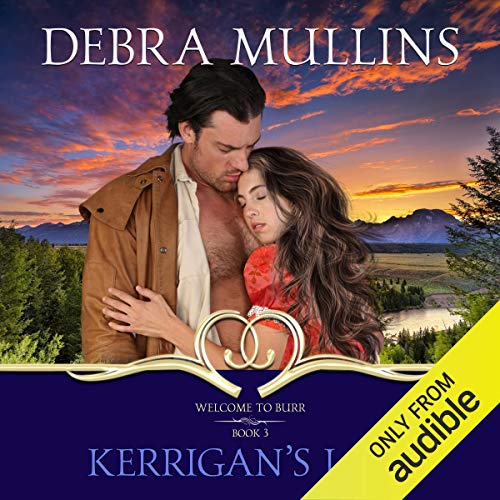 By: Debra Mullins
Narrated by: Joe Arden
Try for £0.00

When bounty hunter J. G. Kerrigan comes to Burr, Wyoming Territory, he's in for two big surprises. The first: His old backstabbing nemesis Blade is in town, trying to pass himself off as a respectable citizen. Kerrigan is determined to bring him to justice, and becoming the sheriff of the small town Blade cares about seems the best way to do it.

The second surprise? A kind, pretty reverend's daughter...with a backbone of steel and blood hot enough to put the desert sun to shame.

Marianne Westerly has lived in Burr her whole life, and when her marriage abruptly ended in an embarrassing scandal, the entire town stood behind her in support. However, their well-meaning concern has turned to nearly smothering pity, and Marianne is determined to leave Burr and move to another city - anywhere else, really, as long as no one knows her story.

But the new sheriff arouses emotions in her she'd never thought to feel again, and she wonders if she should continue with her plan. If she throws caution to the wind, she could find out the attraction is mutual or risk a second round of heartbreak. One thing's certain, though - in Burr, the trail to love is always bumpy.

What listeners say about Kerrigan's Law

this series was so enjoyable, narration was very smooth and just flowed, Joe Arden has the kind of voice that just draws you in and keeps you listening. Each of the 3 books had their own happy ending, no cliffhanger. I do however reccomend reading all 3 in order to really get the full exposure to the characters, as the author puts a lot of thought into building each character

This was a pleasant western story with action and fun characters. The heroine was a good soul searching for a different life. She was surprised and pleased to find that it was in her own hometown

I didn't like it from the beginning. First, what the heck happened to the previous sheriff. Afterall, in the last book the MMC, Marshall, had just accepted the position of sheriff in the previousbook's epilog. So where is he and his new wife Susi? Boom they show up completely different. Disappointing inconsistencies.

This is a story based on unfounded jealousy and revenge. I couldn't stand Maryanne!!! FMC is one of those who has everything, gets everything, and everyone pampers. She's bent on leaving & betray her best friends husband brcsuse she wants to get laid?! 😠 Sheesh! 😡 MMC is a poor clone of the Marshall in book 2 but too arrogant and one dimensional. It never felt like they had any emotion between them. It's never a good romance novel when you are rooting against the MC... hoping them to fail or even get shot 😀

The background story was dull. Maryanne's story wasn't original. It was in fact a regurgitation of Sarah story in book 1. Perhaps if the previous stories hadn't been so interesting (bk one), & exciting (bk two). This is a typical 3rd book.... better left unwritten.

Thankful to have not been born in the era this book was written, but Kerrigan as described in this book is every woman's dream of a man especially in the bedroom!

I loved this novel!

I read this third novel out of order, but I loved the story between JG and Mary Anne! I loved how she was independent and knew what she wanted. JG was her perfect complement!

I enjoyed this historical fiction romance, the small town atmosphere and the nefarious villains of this time period that bring our hero to town. JG is a tall, strapping man who isn’t the ruffian his appearance would suggest and Maryann is taken with him from the moment he saves her life. But the preacher’s daughter isn’t who she appears to be either and their story is entertaining, romantic, filled with interesting characters and provided me great entertainment. While this story stands alone you’ll want to read all 3 books in the series. I listened to the audiobook version and I really enjoyed the voice acting of Joe Arden who did a fabulous job bringing Burr to life with his performance.

letting go of the past

anything narrated by Joe Alden is the good book. I enjoyed the fact that it was a western it has a drama of Western and it had the hard felt picture of love.

Loved it. There is real character development, the side characters are well developed and the story compelling. The end is a bit manufactured for me, I would have loved to read about this couple settling down and facing the difficulties hinted at in the last chapters. But all in all quite entertaining.