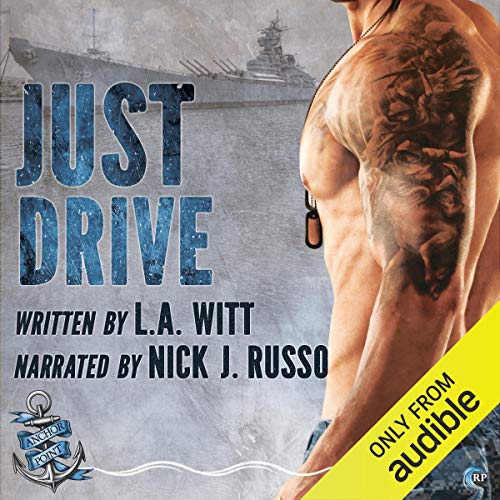 For Sean Wright, driving a cab in the tiny Navy town of Anchor Point isn't an exciting job...until he picks up just-dumped Paul Richards. A drive turns into a walk on the pier, which turns into the hottest hookup Sean's had in ages.

After a long overdue breakup, Paul can't believe his luck. Of all the drivers, he's picked up by the gorgeous, gay, and very willing Sean. Younger guys aren't usually his thing, but Paul can't resist.

One taste and neither man can get enough...right up until they realize that Paul is Sean's father's commanding officer and the last man Sean should be involved with.

With two careers on the line, their only option is to back off. It's not easy, though; the sex and the emotional connection are exactly what both men have been craving for a long time. But Paul has devoted 24 years to his career and his dream of making admiral. If he's caught with Sean, that's all over. He has to choose - stay the course, or trade it all for the man who drove off with his heart.

What listeners say about Just Drive

loved the narration, the humour and the story. listened more than once. worth the purchase

Sweet and entertaining. I love both characters and the age gape is "well done" (it's not the main point of the story which could have make it boring).
The story is moving forward, not getting boring.
The sex scenes are hot and many but not overpowering either.
I'll defenetly have a look at the rest of the series and this author!
Narration by Nick J Russo was on point again!

new to me author but love the narrator so thought I'd give this book a chance. I enjoyed this book and will definately look into the next book of the series. No lead in or characters you get heavily invested in and need their story , however it does introduce you to potential characters for future books. This will be great if looking for a series you can jump into at any point without needing to start at book 1.

Loved the narrator, lots of angst and steamy scenes and lots of love. I would recommend.

Where does Just Drive rank among all the audiobooks you’ve listened to so far?

I could easily have listened to it in one sitting.

The story was as good as I remembered from reading the book and the narration was spot on.

This starts with a breakup, followed by a one night stand between near strangers Sean and Paul.

I love a good May/December romance.

Just Drive works well as Paul and Sean initially begin seeing each other mainly for the truly terrific sex, but it slowly morphs into more as the two can't stop thinking about each other and continue to come together.

The tension comes when the two realize, after they've already fallen for each other, that if their relationship is discovered it could literally mean the end of two careers. Despite the possible consequences, Paul and Sean find it impossible to stay away.

This could have been super angsty, but it's not. I really liked the way Witt handled it, and it's brilliantly narrated by Nick J. Russo.

If you're a fan of Russo's - this is definitely an audio that should get on your playlist. Great character voices with smooth pacing, and when you factor in the sweet story and sexy times - this was an enjoyable 7+ hours.

A May-September forbidden romance between a Naval Captain and commander of a base and the college age son of a man in his command had me plenty intrigued. I already liked the author and the narrator's works so anchors away.

Just Drive ended up being a contemporary piece that progressed gently and had a steady and simple plot. It was a fast attraction and that was the easy part. Finding a way to be together was the entire romantic conflict because according to Navy regs. If they are caught, its a career destroyer for both Paul and Sean's dad.

Just Drive was a slow mover and the reader/listener has to pay attention to the real connection between this pair. Paul opens up about his past and where he screwed up some meaningful relationships and his issues after a pretty bad carrier landing crash. Sean talks a little, too, and tends to be the voice of reason for the pair even if he's the younger one. I enjoyed seeing this pair together and hoped they'd find a way to be a couple though I was pretty sure what had to happen to achieve it and I was right.

This ended up being a rather tricky story for me. I liked it and even enjoyed it for the most part, but there were also a couple issues for me. While I loved this pair together, I felt that the story was padded out by the sex scenes and monologues on the part of both men repeating the same thoughts. It was already a story without a lot of elements and had simple connections between a limited cast of characters so it bogged down for me a bit in the middle as it went back over the same ground.
Then, there is a point where Sean is pushed too hard and he breaks. He goes on a diatribe to his dad that would make a fifteen year old sit up and take notes for future reference. It wouldn't have been so bad, but its paired with a mental diatribe, too. The result is that it altered how I perceived him as an adult character or should I say, I struggled to see him as an adult after that. So, to be clear, it wasn't his feelings or the situation, but just something about his monologue and the additional rant that took me there.

This leads me to pull a one eighty and say that the author addressed some issues that military folk face whether it is their career getting in the way of relationships or military dependents having to sacrifice right along with the one in the service. I thought this was a good thing to layer with this romance to give it depth.

As always when I pick up an audio book narrated by Nick J. Russo, I easily engaged with the story and his storytelling. His alternate voices and those of the surrounding cast of characters, attention to emotion, and tone of the writing was spot on.

All in all, I enjoyed this story with a few minor niggles. The author's attention to setting, situation, and chemistry was good stuff. I would recommend this for those who enjoy a gently paced, spicy m/m Contemporary Romance.

I started this book and stoped before I should have so days later when I decided to go back I couldn't stop listening . I knew I wanted to finish but didn't expect it to turn out so good. Really sweet and hot love story. Worth the credit. Narration was excellent.

loved listening to this book. loved the narrator ! such a sexy voice! great writing!

What a good book!!

I really enjoyed this book. The narrator was great and it was a great story line. It never got boring or lost my attention. As a matter of fact it's one of the few books I have binge listened to.

Although first person narratives are not my favorites, I am partial to military stories, as my ex-husband was A Vietnam Vet , and I lived through PTSD, and learned first-hand what DADT can do to a military man. These characters were strong and well-developed, and the plot was believable. I really enjoyed it.

could not predict the outcome of the book. Perfect

such a great book to listen to on the way to work , although you do have to wait in the vehicle in order to get out. the characterization and the inflection of the narrator was way too good.

loved every minute of it!!!

There is no manufactured drama, no fake angst. The men are amazing together, yet the relationship seems doomed from the start because it breaks all the rules. Maybe some rules are meant to be broken. ...
The story is pretty steamy and definitely not slow burn but the pace of the story is a bit on the slow side.

I've listened to hundreds of audiobooks. This storyline was great. Absolutely could not put this one down. However, the narrator was phenomenal. I am not exaggerating when I say that this is by far the BEST book I have ever listened to in regards to narration.

Sean. He is sweet and mature for his age.

What about Nick J. Russo’s performance did you like?

I like his smooth voice and how he lends a distinct voice to each character.

I listened in two But yes if I had 7 hours I would have.

Just Drive is a sweet, fast building romance. Paul had just ended a long distance relationship and ordered a cab with Military entrance. When he got in, he said Just drive. Sean was surprised but took Paul driving. They spent some time and ended up having sex.
Neither man could get the other out of his mind. Then it comes out that Paul is a CO and Paul finds out Sean's dad is under his command. This changes everything but can either man move on.

I love May/December romance. I also Love L A Witt stories so I was not disappointed in this. I used to not be too hept on insta-love but now it has grown on me. And this was one heck of a good insta-love romances too. The characters are interesting; the story was good there is a lot of sex, and it has a very happy ending. so if you want a happy, feel good, sexy story, take this one for a drive.