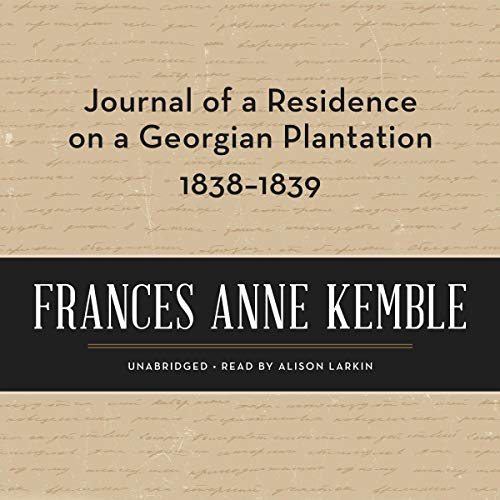 By: Frances Anne Kemble
Narrated by: Alison Larkin
Try for £0.00

A personal indictment of the institute of slavery in the Southern United States, as witnessed directly by Fanny Kemble, a British actress in 1838 and 1839. Her husband, the heir to the plantations in Georgia, however, forebade her to publish this material on pain of never seeing her daughters again. She complied, until the two daughters had reached the age of 21, and then allowed the journal to be published in 1863, when the Northern troops were already present along the coast near the Altamaha River, where the plantations were located. In a very personal way, she relates her many varied experiences, efforts to make life easier for the slaves despite her husband's stubborn resistance. As an English citizen, she had seen the total end of slavery throughout the British Empire in 1833, just a few years before her journey to Georgia. She ends her account with a stirring defense of Harriet Beecher Stowe's novel, Uncle Tom's Cabin, which had raised such a storm of controversy in the United States. Like Stowe, Kemble sees all sides of the situation, with her eyes and with her heart.

What listeners say about Journal of a Residence on a Georgian Plantation, 1838-1839

I think this has a superior feel to the understanding of life as a slave, rather than a documentary overview. You actually feel you are among the inhabitant slaves of the plantation, whipped and brainwashed into accepting their lot as if it was a natural existence.I love the narrators voice.

This journal, compiled in the 1830s but published in the 1860s,, gives insight into the nature of slavery in antebellum Georgia. Kemble, the English born wife of a plantation owner, is often indignant and appalled by the mistreatment of slaves and by the whole slave system.

Kemble comes across as compassionate. But she also at times is condescending and paternalistic. She is, in other words, a product of her time. Her journal, therefore, is a vital historical document.

Her prose style and observations about the natural environment of the Georgia coast reveal her intelligence and curiosity. And they convey a moral seriousness shared by the best writers of her age.

Excellent Book, but the Narrator was Particularly Impressive.

I don’t have much to say about the book itself. It is an eye-opening firsthand view of the antebellum Southern way of life. However, I have to say I was really impressed with the narration of it. Her skillful weaving of accent, from elegant Englishwoman, to an elderly slave woman, to a male American’s southern drawl was astonishing. It rendered the book much easier to follow than it might otherwise have been.

Uninteresting, not a good read

Given the subject matter and the prominence of the people involved, I would not have thought it possible to produce something this uninteresting. Usually I like history titles but I absolutely could not get into this one. Admittedly, Kimble was a performer not a writer, but still. if You want to read a much more interesting (and perceptive) look behind the scenes of a shameful epoch in U.S. history, the Diary of Mary Chestnut is much better.

This is one of the most interesting accounts of antebellum slavery I have ever encountered. I have heard many people try to describe what they think slavery was like, without really being educated on the reality. This is the book they need to listen to/read.

The author is an actress and writer who comes from an anti-slavery British background, but who is married to a man with a slave plantation. She visits the plantation, and tells about her experience through letters to a friend. While her perspective might not match exactly with our modern conceptions of slavery, and the possibilities of free slaves, the account is still refreshing, and lively.

The narration is spot-on. You get the feeling that you're sitting next to a kind, urbane woman whose heart is wrung by the suffering she sees around her. She alleviates the suffering where she can, and takes time to admire nature. Thus, she stays balanced.