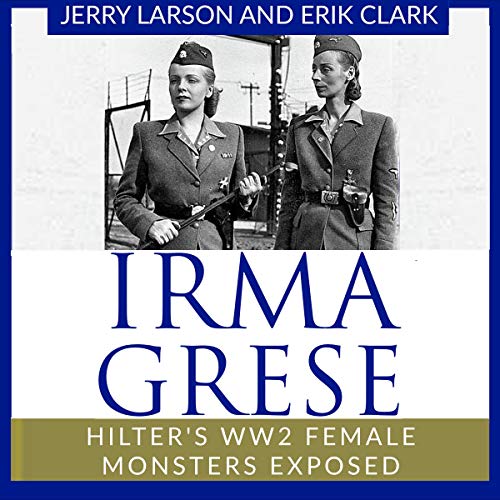 How could young women turn into vicious torturers and killers? How could a position of power turn women into monsters?

Many still see this part of history as taboo, but you must know the truth!

This audiobook takes you on a shocking and disturbing path through the tales of evil and the role that women played during Hitler's reign.

Did Irma’s childhood lead to these disturbing acts? And what about the other young ladies? Can history explain the evil mind of beautiful young women?

The history of the female Nazi is bizarre and unusual. As you discover the evil that prevailed, you may even be surprised to find yourself more empathetic toward the dark history of the Nazi culture.

We study history in order to prevent future atrocities. We must not let this happen again.

If you want to help protect our future, please don’t turn your back from the past. Click the "Buy Now" button and discover the hidden secrets of the female Nazi.

What listeners say about Irma Grese

To say I enjoyed this is the wrong terminology. I found it interesting, horrifying, tragic & terrifying. I cannot imagine the horror experienced by the people locked up in these evil places, not only Jewish people but gypsies, disabled, anyone that didn’t fit with Hitlers ideology for a master race.

I find it particularly unsettling that women guards took part in the violence & cruelty in these death camps. I hope they rot in hell too.

This needs to be a lesson to everyone in the world, that we are all human. We must embrace our differences and never think that one demographic is better than another demographic.

The book illustrates how sadistic individuals and regimes can manipulate some individuals to do truly horrific acts to innocent people. I see many folks in our present society who may be susceptible to such manipulation.

It's as if the author read a synopsis of a different Irma Grese book and then expanded it into a 13 chapters. Of course, Grese was evil, vile, cruel, depraved, sadistic etc. but the entirety of this book is simply repeating those buzz words for 3 long hours. The narrator's bizarre and somewhat slurred delivery did not do any favors to improve the experience.

Super repetitive throughout and the narrator was stilted and awkward. The book was informational but felt like a lot was missing and just started repeating what was already discussed.