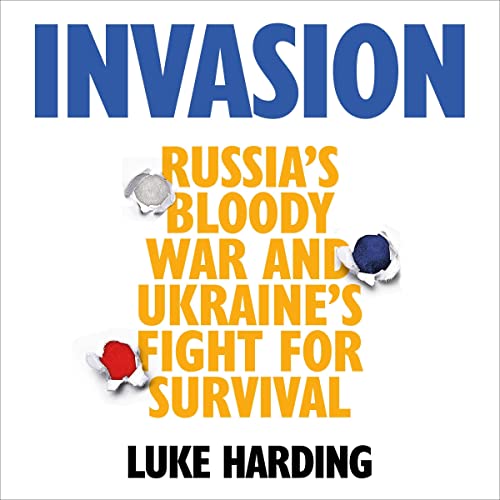 By: Luke Harding
Narrated by: John Sackville
Try for £0.00

The first book of reportage from the front line of the Ukraine war. Invasion is a powerful, moving first draft of history written by the award-winning Guardian journalist and #1 New York Times bestselling author of Collusion and Shadow State.

For months, the omens had pointed in one scarcely believable direction: Russia was about to invade Ukraine. And yet, the world was stunned by the epochal scale of the assault that began in February 2022. It was an attempt by one nation to devour another.

Invasion is Luke Harding’s compelling chronicle of the war that changed everything. For this breath-taking work of reportage he spent months reporting on the ground during the build up to the conflict and afterward; his book tells of the initial days of shock and panic, the grim reality of this ongoing war, and the unheard human stories behind the headlines. Invasion also offers insightful portraits of the war's two great personalities. One, Volodymyr Zelenskiy, is an actor-turned-president who rallied support on a global stage. The other, Vladimir Putin, is a dictator who dwells in a strange and unreachable realm. Harding examines the ideological, religious, and personal reasons behind Putin's decision to invade. And he confronts a crucial question: which side will prevail in this terrible war?

Written in Luke Harding’s starkly transfixing style, this is an urgent, and powerful account of the largest armed conflict in Europe since 1945. The action spans battlegrounds on land, sea, and sky, from atrocities committed in Mariupol and Bucha, to the key military frontlines in Kherson and the Donbas. With the ripple effects of this conflict already being felt beyond Ukraine and Russia’s borders, it’s more vital than ever to understand how the situation on the frontline will have profound effects for us all. Having warned correctly about Putin’s dark and adventurist ambitions in his previous books Collusion and Shadow State, Harding’s analysis of the war's consequences for Kyiv, Moscow and the world makes for essential listening.

"Essential reading for those who want to understand the most important conflict of the 21st Century." (Eliot Higgins, founder of Bellingcat)

"Luke Harding is one of the best reporters in the world." (Roberto Saviano, author of Gomorrah)

"Luke Harding has once again written a superb first draft of history, this time of the Ukrainian war. An excellent, moving account of an ongoing tragedy." (Anne Applebaum)

What listeners say about Invasion

The book is interesting and easy to read. It is clearly the work of a journalist, accustomed to providing vivid details with a strong personal dimension. There are plenty of striking characters and vignettes.
The strength in description is not matched by deep analysis. It is an action story rather than an analytical study. The style of writing is based on short sentences, which makes for accessibility at the cost of depth of ideas. The structure is episodic, again reflecting frequent, short journalistic pieces.

Essential listening for this brutal war

Invasion is essential listening for anyone trying to understand this tragic, dangerous, never-should-have-happened, seemingly intractable war between Russia and Ukraine. Luke Harding is uniquely qualified as a highly respected journalist with many years of intimate first hand knowledge of both Russia and Ukraine, both their politics and leaders, and their people . This is the first book of reportage to be published from Ukraine covering events before the invasion and after up to late 2022. It is , however, chastening to see that the immediacy of Invasion has already been overtaken (although not diminished) by events over Christmas and this New Year 2023.

Invasion details in livid colour and detail the heart-rending human experience of Ukrainians under bombardment, terrorised in basements and metro stations, surviving and not surviving the hideous destruction of their families, homes, communities, towns and cities. With his recurrent cameos of human suffering, Harding makes us imagine the unimaginable.

But Invasion , which is outstandingly well written , is much more than a first hand account of a brutal war . Harding has lived in Russia and presents a clear analysis of the complex workings of Putin’s mind and psyche which led to the invasion. Did he, for example, choose February 24th for the day of the invasion because it is the birthday of Fyodor Ushakov, his 18th century hero naval commander ? His assessments of Zelensky are also shrewd: his extraordinary metamorphosis from a television actor-celebrity fictional president who became a real life President quickly winning a place on the global stage helped by his consciously Churchillian rhetoric. With these two leaders it is no surprise that , as the damaging effects of this conflagration ripple across the globe, Harding holds out no hope of a simple resolution, or indeed any at all.

In New Year 2024 will he be writing a follow-up to Invasion covering another year of brutal conflict? Tragically, it seems more than likely.

Really enjoyed this, on the ground reporting a mix of opinions from ordinary citizens, soldiers and also high level policymakers

A journalistic flair, including first hand reporting, makes this writing of important contemporary history very engaging. Even if you have been following the news and know most of what is being written about this summary and analysis will help you make more sense of the year long war,

As ever, an excellent book from Luke Harding, very well narrated.

This examines Putin's reasons for invading Ukraine, of the sheer evil of the actions of his troops and mercenaries, of how he has tried, and continues to try, to "play" the West.

Human perspective of the ongoing conflict so far

Intriguing "big picture" of the equally tragic and heroic conflict so far. Contained lots of interesting human viewpoints to different aspects of the war, and many other things that are probably not so well known even to people such as me, who have monitored the news from this war very closely. Highly recommended!