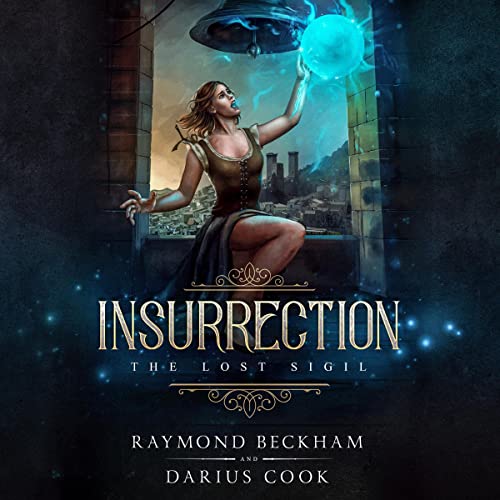 An evil empire. An offer of vengeance. A terrible price.

The Rodeam Kingdom has become a tyranny, rewriting their dark history and experimenting with vile magics on their own subjects.

When a woman is taken by the tyrant’s agents, the monarch doesn’t comprehend the grave mistake he’s just made. To rescue her sister from a terrible fate, Arionna agrees to learn the ancient arts under a potent wielder, the mysterious and manipulative Temporer, Melchior.

Her power comes with strings attached. When Arionna is given a task that leaves her badly injured, she is found by a man who vows to keep her safe: Galil. Unfortunately for him, when Arionna wakes, keeping her alive—let alone safe—might prove to be too difficult.

What listeners say about Insurrection

lives up to its 'Potent'ial . a powerful fantasy

I enjoyed listening to this book and would recommend yo others.
It has 3 main characters but I enjoyed Ariannas development the best. She is on a quest to rescue her sister and reunite them after her disappearance 2 shinning previously.
I like the various use of 'powers' potents and gelails natural furnace.
I am also intrigued by having a king who has less power than his wife due to not being of the royal blood line.
There is a lot of individual story's which work well with lots of little character points that keep you trying to figure out how it all will come together.
The narration was excellent.
I feel like there could be a lot more development in future books.

I received a free copy of this book and am voluntarily leaving a review.

Within the first chapter I was hooked.
The story is well written.
The narrator done an amazing job with the book.
Amazing job from the authors I highly recommend this book to everyone

I was given a free copy of this book and I'm leaving an honest and voluntary review.

A great listen, good characters nice amout of detailing with a good amount of depth.

narration is really good to.

good as a YA

Overall it was a really good story, but the dialogue often takes it out of high fantasy and into just YA fantasy with modern phrases and verbiage. it has a tendency to be Tolkien-esk in description of magic components so that kind of made me fade out a bit in attention. but the story is really good and I hope with a little tweaking following books can work on the dialogue and be truly magnificent.

I am not a reader and usually get distracted with 5 minutes of an audio. I also am not into sci-fi. I decided to listen because my daughter is the narrator. I had planned to skip around just to hear the various voices she uses. However, much to my surprise, the story got my attention quickly, and I had to keep listening. I am ready for the next book.

Also, the narration is unbelievably good. 😉

The story is amazing

This is the first time I've listened to the Authors, and the narrator. I have to say, the story is very interesting, but Sarah Jessica Curry brought it to life. If I had to read some of the words, I'd stumble over them. They rolled right over her tongue, like it was meant for her. I would definitely recommend this book to all my friends and family

Cant get into this one, giving up

I received a free copy for my review, so here goes.

The extended pauses between each paragraph cause it to not flow well from me. if the storyline holds up I could get thru it, but nope, not there either.

The main characters need to find her sister is brought up over and over and over and over again to the point whers I just cant keep going. I made it about 40% of the way thru. I think this will be the first book I havent been able to get thru, feel like I am getting up and walking out of a movie. yeah, its that much.

It feels like this book was required to meet a word count and the same plot intro was just recycled until the word count was met.

This book was really good. Really didn’t see that ending coming. The plot and characters were great.

Really enjoyed the story and narration

Author does a great job character building... you get pulled into the story and invested in what happens next to them. Narrator is excellent with intonation and voice specific for each character so it's easy to follow. really enjoyed and can't wait for more!

I thought it was well written. The imagery was creative, detailed and I definitely enjoyed the monster scenes. I did wish the author stuck with “She” instead of switching between “She” and “Arianna” too frequently even though there are no other characters involved to have to clarify the character. I also thought the character was a little immature/impulsive, and I got tired of hearing about finding her sister so often. Obviously that’s the main premise, but it was just mentioned so frequently I found myself wishing she didn’t have a sister. Lol. Narrator was decent, which can definitely make or break an audiobook experience if it’s a bad one.