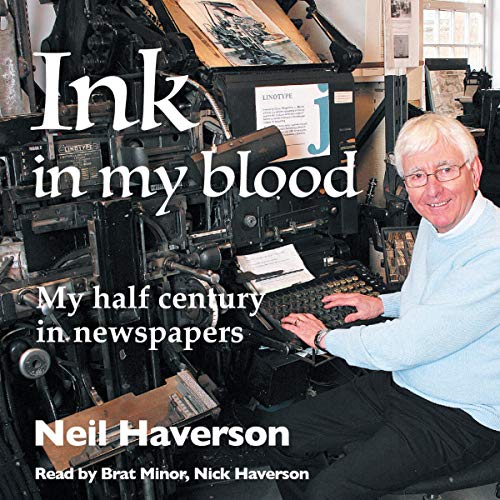 Ink in My Blood

By: Neil Haverson
Narrated by: Nick Haverson,Brat Minor
Try for £0.00

Listen to Neil Haverson's 50-year ride through the Norfolk and Suffolk newspaper industry, in this audiobook edition read by "Brat Minor", Nick Haverson, and with an introduction to Neil's "greatest hits" from "Brat Major".

Enjoy Neil's tales of bachelor life in King's Lynn and sporting prowess on the cricket field and hockey pitch - also find out how he met Mrs H.

Neil has witnessed it all in the ever-changing regional media world - from flongs, hot metal, and office cricket to full color printing, digital editions, and the web.

For much of his career, Neil worked in Eastern Counties Newspapers, latterly Archant's commercial arm, but his talent as a humorous writer was discovered on the in-house Prospect magazine. This led to wry sporting columns and the famous "Fortress H" dispatches in the Eastern Daily Press.

In this audiobook hear Neil's "greatest hits" from his Norwich Mercury, Eastern Daily Press, and Let's Talk magazine columns and his reflections on half a century of ink in his blood.

Nick Haverson said: “I read other people's words out loud for a living nearly every day, but reading out my Dad's words was a whole new experience. I had to cope with the shock that he was once young and then narrate the horror of my own childhood behavior.”

Neil Haverson explained: “When I write I try to use words that will paint a picture in the reader’s imagination. Words and phrases that I hope will convey mood and humor. It was fascinating to hear them spoken aloud and see how Nick interpreted them. He got the message spot on. Not only because he was present for much of it but, according to his mother and his wife, he has a certain sense of humor. Not dissimilar to mine.”

What listeners say about Ink in My Blood