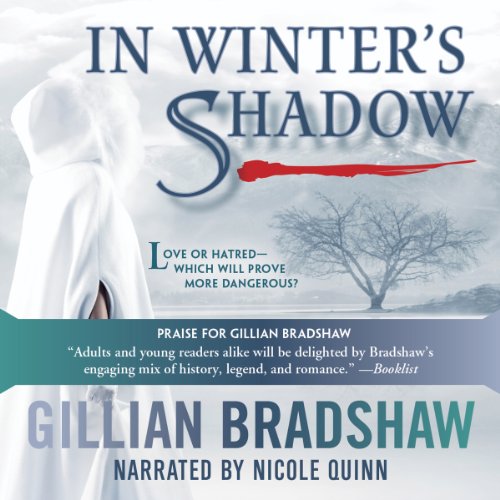 By: Gillian Bradshaw
Narrated by: Nicole Quinn
Try for £0.00

The fate of heroes finally revealed. . .

As powerful enemies attack the throne from inside the kingdom, Arthur, his queen, and his greatest warrior Gwalchmai will be put to the ultimate test. Never faltering in her loyalty to the king, Gwynhwyfar has stood at Arthur's side through rebellion and war. But one desperate decision could cost her all they've built. With the kingdom crumbling around them, following the Queen's heart could be the greatest threat of all.

What listeners say about In Winter's Shadow

In Winter’s Shadow is the final book in Gillian Bradshaw’s DOWN THE LONG WIND trilogy, an elegantly written historical fantasy about King Arthur that’s inspired by the Welsh legends. While the first two books, Hawk of May and Kingdom of Summer, have focused on Gwalchmai (Sir Gawain), this last novel is written from Gwynhwyfar’s perspective. You certainly don’t need to read the previous books to fully appreciate In Winter’s Shadow, but if you’re a fan of the time period or the legends, you’ll probably want to read Hawk of May and Kingdom of Summer at some point. They are lovely historical stories.

In In Winter’s Shadow, Gwynhwyfar gives us some of the history of the Roman Empire and its relationship to Britain. She tells of how when Rome left, the petty kings of Britain squabbled amongst themselves and were in danger of being overrun by the Saxons until Arthur declared himself emperor and forced them to unite. She also gives some of her own backstory — how she hates women’s work, prefers to study, and was her father’s pet. She spends her days working tirelessly to advance Arthur’s kingdom while he’s away on campaign. She runs her household, manages supplies for Arthur and his soldiers, and extracts taxes from the petty kings and the church. It is hard to deal with a war-torn country, plotting kings, and resentful clergy.

Gwynhwyfar desperately wants a child who will be Arthur’s heir. So far she has miscarried the children she’s conceived. She fears that Arthur will divorce her, but he refuses. She is jealous of Medraut, Arthur’s bastard son whose mother was the evil Morgawse. Medraut’s presence at Camelot reminds Gwynhwyfar of her barrenness. It frustrates her that Arthur has a son out of that hateful relationship with his stepsister, but can’t get one out of love with Gwynhwyfar. Medraut is still disrupting the unity of Arthur’s band and Morgawse haunts Arthur and Gwynhwyfar’s relationship. Thus, Morgawse, even though she’s dead, still threatens to bring Arthur — and all of Britain — down.

All of this is a lot of stress for Gwynhwyfar, which explains why she makes a couple of REALLY BIG mistakes, and why we, the readers, feel empathetic toward her even as we realize she’s being REALLY STUPID. The consequences of Gwynhwyfar’s sins are severe and instead of making Arthur’s reign more secure, she ends up destroying everything.

Though the story is slow and repetitive at first, In Winter’s Shadow eventually takes off and becomes quite compelling. Gwynhwyfar faces several moral dilemmas that are just as relevant today as they were back then. Is murder ever justifiable? What about adultery? When our leaders fail to act, when is it okay to take matters into our own hands?

In Winter’s Shadow is tragic and painful. It’s a disaster story. It’s the story about how well-meaning people can royally screw things up. It’s about the end of personal relationships and the end of an empire. Gillian Bradshaw succeeds in making both seem equally tragic.
Once again, I listened to Nicole Quinn’s narration of the audio version. She has such a beautiful voice and I especially liked her in this book because it’s told from a woman’s perspective.

A wonderful presentation of Camelot legend


Carrying the story forward, the story is now told by Gwenhwyfar or Guinevere as more commonly known. Bradshaw has managed to bring us to the end of days for Camelot, with the final battles, the death of Mordred, Gwalchmai’s death and her own roles and guilt for her part.

Again managing to re-invent the story of King Arthur using Bretonized forms of the names and presenting unique perspectives on the events, with points of view that were left untold or unimagined in the originals, Bradshaw has managed to neatly pull all of the threads together and wrap this series with a conclusion that is both refreshing and satisfying.

What stands out prominently for me is Bradshaw’s ability to present her characters in a way that both feels unique yet holds true to their own internal dialogue as they explain, tell and share their parts of the story. From Gwalchmai’s guilt about his lost love, to the very well-reasoned and completely real sense of ‘what is right’ that Gwenhwyfar presents as she wraps up the series, this reads as if the characters are real and palpable, giving readers the ability to commiserate, empathize, learn from and enjoy each person as they appear.

Narration is again provided by Nicole Quinn who manages to present the arcane and archaic place and character names with a smoothness that never falters. That is a quality of major importance, as the names and places are often tongue twisters, and the flow of the story would be greatly impacted if the pronunciation faltered or varies. Additionally, her narration of the many moods of Gwenhwyfar, and the addition of simple adjustments in accent, tone and pace as she presented the other characters not only were easy to distinguish, but added to the enjoyment and impact of the story. Touches of Wales and Scotland, as well as a bit of the ‘Northern’ accent all add to the story, and her seamless transitions in this well-produced performance are a wonderful addition.

I received an AudioBook copy of the title via AudioBook Jukebox for purpose of honest review. I was not compensated for this review: all conclusions are my own responsibility.

Beautiful Arthurian tale. Very well rounded and unique perspective on King Arthur and his knights. The series is very well intertwined, and will definitely make you cry.

The best of the 3 in this series!

This is a series that now sits proudly in my Arthurian library in hardcover editions (some of the paperbacks suffer from some horrible artwork choices). I also switched between Kindle and Audible editions of these books and will do so again in the future. The audible narration by Nicole Quinn is first rate with very few technical glitches (such as the repeating of a phrase here and there).

When I started the "Down the Long Wind" trilogy, I would have placed it as one of those series that proves rewarding after one has gotten through the other modern Arthurian classics such as those by Mary Stewart and Rosemary Sutcliffe (to mention only two). But, having complete the last book in the series, I place Bradshaw right up there on the first tier. "In Winter's Shadow" is an Arthurian novel that stands out among the very best I have read. At first, I was put off by the choice of yet another point of view; I wanted the the story of Gwalchmai to continue and that of his humble servant Ryhs. Besides, there have been numerous third rate retellings of the story of Guenevere (here in this novel Gwynhwyfar) and it is Gwynhwyfar who now narrates the novel. Did we really need to go this route, after the first two wonderful novels? Yet, I need not have worried; the story of Gwalchmai and the cast we have met in the previous novels are all here and their story continues.

Bradshaw delivers not only the tragic but satisfying conclusion to the legend of Gawain, but manages to present us with an entirely believable Gwynhwyfar. This is thus far the most endearing, vulnerable, and frustrating Gwynhwyfar that I have read in any source to date. The novel had classic Arthurian characters, including Medraut-Mordred, move me in ways that other works did not achieve. This a novel about forking paths and how each act may lead irrevocably to another, but how in the end these characters face their destiny (Bradshaw stays faithful to the major structure of the Arthurian tragedy while still delivering a few surprises), and she does follow Mary Stewart's casting of Bedwr into the role of Lancelot—I'm not sure if any other writers have done the same.

Gwalchmai has a bit of the vengeful Malory touch, but it is difficult not to feel his pain, in light of the tragedy that he faces, and this is cemented in his statement, "...the laws promote justice to those who have been wronged, and to obtain justice in such a cause I would go to the ends of the earth; I would take no blood-price, and spare no life in the world for pleading or claims upon me." More of this, I will not say, but I have always found that the best Arthurian retellings are those that do not skew to the ennobling or preference of one character at the expense of all the other characters. This is a very human and grey novel.

This novel accentuates the conflict by looking at it from sympathetically from characters on all sides of the conflict. The story of Arthur, Gwalchmai, and Gwynhwyfar comes to that end that we have all come to expect from the legend, but how she gets us there is utterly enthralling.Of course the Mordred figure is the villain, but Bradshaw reminds us how he became one and gives us a surprise at the end.