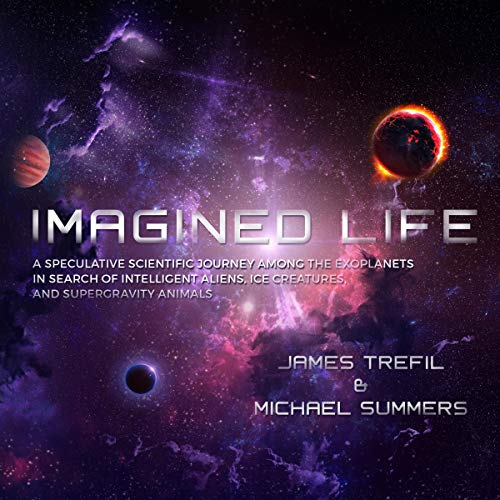 By: James Trefil,Michael Summers
Narrated by: Paul Boehmer
Try for £0.00

The captivating possibilities of extraterrestrial life on exoplanets, based on current scientific knowledge of existing worlds and forms of life

It is now known that we live in a galaxy with more planets than stars. The Milky Way alone encompasses 30 trillion potential home planets. Scientists Trefil and Summers bring listeners on a marvelous experimental voyage through the possibilities of life-unlike anything we have experienced so far - that could exist on planets outside our own solar system.

Life could be out there in many forms: on frozen worlds, living in liquid oceans beneath ice and communicating (and even battling) with bubbles; on super-dense planets, where they would have evolved body types capable of dealing with extreme gravity; on tidally locked planets with one side turned eternally toward a star; and even on "rogue worlds," which have no star at all. Yet this is no fictional flight of fancy: The authors take what we know about exoplanets and life on our own world and use that data to hypothesize about how, where, and which sorts of life might develop. Imagined Life is a must-have for anyone wanting to learn how the realities of our universe may turn out to be far stranger than fiction.

What listeners say about Imagined Life

Down the Galactic Rabbit Hole

I enjoyed this audio book so much I purchased the hard copy for my library. The first 5 chapters sets the scene for the rest of the book. In those introductory chapters the science is flawless as well as the history. The story continues from examining actual exoplanets by name, that have been recently discovered, and compares life as it appeared on Earth, with the similar attributes as in our part of the galaxy. I thought what created a more believable scenario was using the actual exoplanets in each of the examples, life like us, life not like us, and life really not like us. The variety of worlds make this not only a lesson in astronomy & astrophysics, but microbiology through zoology. After each visit to one of these worlds, the chapter ends with a short discussion between the authors on how life could possibly exist on a planet like Earth from the perspective of the life that exists on that planet. It's a fun book to listen to and 5 stars to the narrator Paul Boehmer for keeping it all interesting.

I recommend if you purchase it, to listen more than once. The Authors MS & JT admit that they have stretched the limits of possibilities but that just makes it more interesting. The other part of the story that I appreciated was the discussions on all the scientific spacecraft that is in orbit and will be in orbit that help us understand the universe. The Hubble, TESS, Kepler and the JWTS. As of the writing all but the James Web had been placed. Thier descriptions of its orbit and function is now a fact as it orbits the Lagrange (L2) about 1,000,000 miles from the Earth. I hope you enjoy this audio as much as I do, so buckle up for a trip down the galactic rabbit hole!

Little in life for me is as irksome as having to listen to poor AI reading. The non-existent tonal range, over precise diction and monotonous drone of the awful AI reader proved too much by the end of Chapter 3. Even being stuck in traffic jams didn't help me to adopt a 'better than nothing ' attitude. That's a real shame because the book explores some truly interesting turf. I will get the book and give that a go instead

good book on alien life based on basic science

it's a good book about possible alien life on various types of planets. Since we still don't know the science consciousness, it's a stretch to talk about intelligent alien life based on what we know today. overall probably the most thorough book of this subject, but it got kinda long and boring half way through listening. it got me to think about it a little bit, but i learned nothing new since i was already pretty up to date on astronomy and life science. it's a great book for people who have not thought much about this topic before.

this is an energy pack book full of surprises

the reader in the Arthur's really knew what they were talking about and constantly Drew you in closer.