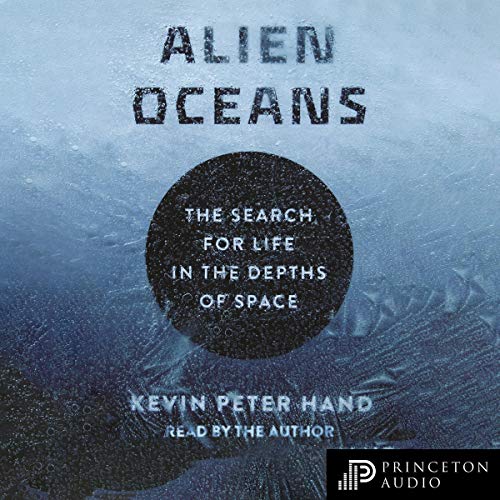 Where is the best place to find life beyond Earth? We often look to Mars as the most promising site in our solar system, but recent scientific missions have revealed that some of the most habitable real estate may actually lie farther away. Beneath the frozen crusts of several of the small, ice-covered moons of Jupiter and Saturn lurk vast oceans that may have been in existence for as long as Earth, and together may contain more than 50 times its total volume of liquid water. Could there be organisms living in their depths? Alien Oceans reveals the science behind the thrilling quest to find out.

Kevin Peter Hand is one of today's leading NASA scientists, and his pioneering research has taken him on expeditions around the world. In this captivating account of scientific discovery, he brings together insights from planetary science, biology, and the adventures of scientists like himself to explain how we know that oceans exist within moons of the outer solar system, like Europa, Titan, and Enceladus. He shows how the exploration of Earth's oceans is informing our understanding of the potential habitability of these icy moons, and draws lessons from what we have learned about the origins of life on our own planet to consider how life could arise on these distant worlds.

Alien Oceans describes what lies ahead in our search for life in our solar system and beyond, setting the stage for the transformative discoveries that may await us.

"Kevin Peter Hand has delivered a beautiful portrayal of the science behind our search for life in alien oceans, and the connection to our precious ocean here on Earth. A must-read for all who gaze at the stars above and ponder the abyss below." (James Cameron)

"Hand humanizes the science behind the search for life on icy worlds in our solar system and beyond." (Gordon Southam, University of Queensland)

"In this delightful book, Kevin Peter Hand takes readers from the depths of Earth's oceans to those of the outer solar system, describing encounters with magical, alien-like creatures at the bottom of the Atlantic and offering informed speculations about what life could be like in the subsurface oceans of faraway moons. Recounting the story of how we discovered these alien oceans, he gives us a peek at the lives and personalities of some of the scientists who pieced together all the clues. His explanations are full of engaging analogies that will help general readers understand the science needed to think rigorously about life as we know it - and as we do not yet know it." (Jill Tarter, SETI Institute)

What listeners say about Alien Oceans

A wonderful book on the fascinating oceans on the moons of our solar system and beyond and their potential for life. The author is a passionate scientist and his enthusiasm for his subject is infectious. He also delivers the narration excellently. I hope he writes and narrates further books. I really enjoyed this.

An easily accessible and very human guide through the requirements of life, the likelihood of it being beyond our planet and how we could some day discover it.
I have a biology doctorate but learned a great deal.
Dr Hand communicates well through his own humanity and wonder. The audiobook benefits greatly from being read by the author.

Well done, up to date, and a good science review!

Just finished this. I wasn't sure what to expect with a new book and few ratings but it turned out great.

It is a beginners to mid level examination of the science we have today to explore oceans on Earth and other solar system bodies. It doesn't waste time getting too far into technology we don't currently understand or have but goes with what we already know and use.

The explanation of some astronomical or physics or chemistry fact always raises additional questions that the author promptly goes on to examine without getting side tracked on a new topic. Examples would be 'How do we know there is (probably) and ocean below the ice on a Jovian moon without drilling a hole in it?" Answer: We use this machine and this scientific principle and here is a short review of how we know this and how it works (i.e. Rotational characteristics of shell vs. uniform composition ice moons and how to determine this with a space craft). No calculator or PhD required to understand.

The science may be a bit much for some but the information is presented in such a manner as to make it understandable with a small dose of faith that some really smart people have been working on these subjects since before PC's and cell phones were around.

The presentation was orderly and worked well. There was only a half sentence that got repeated (oops) but the sound quality was good throughout and was consistent. The reading was a presentation of facts for the student to learn from rather than an over dramatic recitation. It would be a great set of lectures to attend especially with added graphics and would be a superb episode for Nova or Nature TV programs or even NASA to present. There's even a great science fiction story opportunity hidden in the lectures (or below the ice).

I also appreciate the no nonsense presentation of facts without excessive distraction from the topic with opinion or judgement of motives. Here is what we know. Here is how we know it. Here is where it could lead next.

The author should consider another series of lectures that examine more deeply the aspects of robotic vs. piloted exploration of our solar system based on his experiences of examining our own oceans in depth. No pressure, just a thought.

Good job with this one.

So much better than papers, Great listen!

Love that this is an audiobook! I am a PhD student studying biogeochemistry and I have to read so many academic papers that use a lot of scientific jargon and are hard to read all the way through. I have always wished there were audio versions of papers, and this is not only an audio version of academic work it is also written in a way that is friendly to all audiences and is more like a story and I really appreciate that you put this out Dr. Hand! And I also appreciate that you went to the trouble of reading it yourself as well, sometimes the context is lost when a stranger reads your work, so Thank you!

Voyage to the bottom of the seas

The author, is the narrator and the journeys you are experiencing are as real to life without actually being there. Ride in the Russian Mir submersible & British Alvin. 5 stars for all categories as this is a fantastic voyage through the Earth's deepest oceans as well as the possibility of developing future technology to explore alien oceans in our own solar system. The three moons of Jupiter, Callisto, Europa & Ganymede and two moons of Saturn, Titan & Enceladus offer the most probable locations for ice & water worlds that could have the chemistry for life. The science is solid & the theory of gravitational forces that wax and wane to change the surfaces of these moons has created a venture called the Europa Clipper that could arrive in the 2030's. If the Europa Clipper can analyze the surface chemistry, then the answer that humans have wondered since we have looked up into the night sky and wondered are we alone, just might return the answer either yes, or even more surprisingly no, would change humanity forever. I enjoyed this audio book so much that I have listened multiple times, and even purchased the hard copy for the amazing photography. Learn all about the Lost City and the undersea hydro vents in our own seas that harbor extreme life forms not even known until recent times. Life forms that thrive as the third form of life called extremophiles. These life forms can be found all over the Earth in hot springs and pools of acid & other extreme ecosystems. Life finds a way to survive even where is no sun light for photosynthesis, using hydrogen, methane, hydrogen sulfide & different metals erupting from these deep sea hydro thermal vents. Chemosynthesis is the process of extracting nutrients from the surrounding environments when there is no sunlight available. If you enjoy learning, especially science, then this audio book offers adventures beyond your imagination.

Was referred this title from a Tyler Cowen reading list, had to leave a review. Enjoying thoroughly!

Discover a rare gem in the depths of this book

Perfect! Well written and well read, Alien Oceans will draw you in and keep you hooked like few nonfiction works can. Both broad and specific, Kevin lays out the methods in the search for life and the context. Cannot wait for this book to be updated after the Europa Clipper!

Great reading with lots of scientific facts about ocean moons and prospects for finding life with easy explanations.

This is a wonderful book… accessible, stimulating, engrossing, opening your mind to potentially life-supporting environments within our solar system. Ideas all well-thought-out and presented clearly. Excellent narration by the author. I have 796 books from Audible, this is one of my very few 5/5/5 reviews, and I actually paid cash (not a credit) on this one - best decision I’ve made in a long time. Thank you, Kevin.

Excellent intro to the fascinated subject

I really liked this book. The author takes one of the most fascinating question of recent decades and offers some answers that are both easy to understand and deeply rooted in science. I didn't like the narration... it felt a bit too colloquial, but then, after I was done with the book, I saw that it was the author who provided the narration. That changed everything: it made the author and the subject more approachable... more like listening to a passionate and knowledgable friend.

Overall this wasn't a bad book. It started out pretty good with but by the last half it felt like a high-school chemistry and bio text book. There also was so much speculation and not much conclusion (which I fully understand) but a good amount was so far fetched it could have been left out.

The material is great but the authors cadence is a little too Captain Kirk in his delivery. Might be better read than listened to.