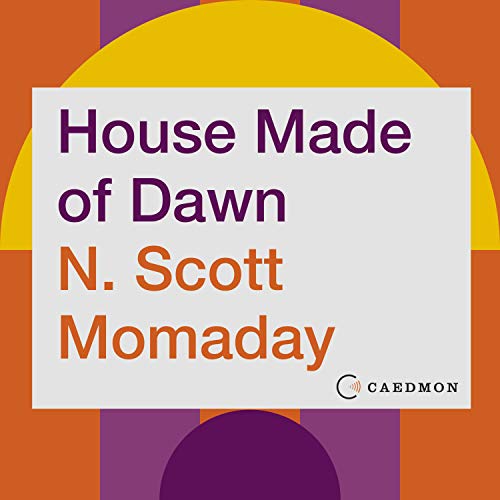 House Made of Dawn

"Both a masterpiece about the universal human condition and a masterpiece of Native American literature.... A book everyone should read for the joy and emotion of the language it contains.” (The Paris Review)

A special 50th anniversary edition of the magnificent Pulitzer Prize-winning novel from renowned Kiowa writer and poet N. Scott Momaday, with a new preface read by the author

A young Native American, Abel has come home from war to find himself caught between two worlds. The first is the world of his father’s, wedding him to the rhythm of the seasons, the harsh beauty of the land, and the ancient rites and traditions of his people. But the other world - modern, industrial America - pulls at Abel, demanding his loyalty, trying to claim his soul, and goading him into a destructive, compulsive cycle of depravity and disgust.

An American classic, House Made of Dawn is at once a tragic tale about the disabling effects of war and cultural separation, and a hopeful story of a stranger in his native land, finding his way back to all that is familiar and sacred.

What listeners say about House Made of Dawn

The beautiful poetic descriptions create a special atmosphere, but at the same time, the struggles of the protagonist are also highlighted, so it is not an idealised, romantic world at all.

N.Scott Momaday is poet, and his stories are essentially long, richly lyrical poems. Momaday reads the preface in his mythically profound voice, that brings the words to life. But tragically Darrell Dennis’ performance is robotic and lifeless.
One must pay close attention to poetry as it is, and having a bland reader makes it impossible to follow the story. Especially when compared to Momaday himself.

Novel great, reader not so much.

House Made of Dawn is gorgeous, lush, and a bit of a challenge if you are listening to it without the text in hand. I finally stopped listening altogether (returned the audio book) and finished reading it in hard copy. The narrator is a good reader, but altogether unsuited to this work. He reads fast through every part, whether he’s reading the words of a guilty priest’s journal or a sermon by the Priest of the Sun which is, in my view, the centerpiece of the novel and a passionate paen to language and the power of the word. These passages demand that the speed and rhythm of the written words be respected in the spoken. The descriptions of landscape which are so integral to the novel need to be delivered at a speed that permits the listener to create them in her mind. Also, the text follows several characters, often all in the same chapter, and the switch from one character to a different person is indicated by extra spaces. A narrator needs to pause and it indicate with his voice that there is a change. A skilled narrator anticipates the reader’s “blindness” and creates cues. The Caedmon version of the novel opens with an introduction by the author. His voice is deep and sure and measured. He reads his prose as poetry. When I bought the audiobook, the author was listed as narrator together with Mr.Dennis. Prospective buyers should be aware that only the introduction is read by the author — the novel is Mr.Dennis. I would love to hear an audio version of this book in Mr. Momaday’s voice. This version just does not meet the performance level that the book demands.

Strange choice for the narrator. He didn’t really seem to understand what he was reading most of the time.

The Foreward alone is an absolute gem. The story and the telling of it are on a literary pinnacle. I’ve listened three times and I’m not done. Enjoy!

A Non-Linear Plot Buried Beneath A Thick Layer of Poetry

This is a beautifully written, poetic story. The plot is non-linear. I enjoyed it—but the narrative never got its claws in me. I never got fully engrossed.

I feel like this is a book that would take a reader like me several readings to fully appreciate and understand.

There are several Audible reviews that criticize the narrator. I would like to add that those criticisms are bunk. The narrator is fantastic.

I specifically got this book on audiobook because I thought it would be better to hear the poetic writing than just reading it. Unfortunately, this narrator was not right for this book. His reading was flat. He had trouble pronouncing longer words, and added and left out syllables at times. There are many Spanish person and place-names and the author's pronunciation of them was clumsy and frankly wrong at times. These problems were so distracting that I could not focus on the story, much less the poetry. I quit the audiobook and will read the book in print.

The Foreword was wonderful, with vivid biographical details that brought the subject and characters to life. It was poetry, and was read by the author rather than the narrator.

hard to connect with the character

The writing is beautiful. The descriptions of South Western American landscapes and mid-1900s Native American life are beautiful. But, the story reads like a rambling, poetic journal that makes it hard to connect with the lightly developed characters. I’m sure Momaday’s poetry is lush and beautiful.