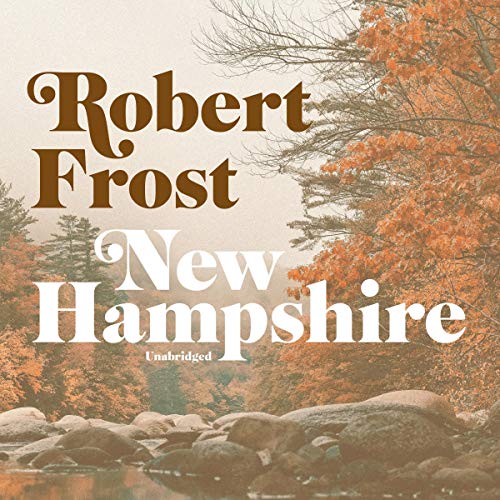 By: Robert Frost
Narrated by: John Lescault
Try for £0.00

Robert Frost (1874-1963) was the most celebrated poet in America for most of the 20th century. Although chiefly associated with the life and landscapes of New England, his work embodies penetrating and often dark explorations of universal themes.

New Hampshire features Frost's meditations on rural life, love, and death, delivered in the voice of a soft-spoken New Englander. Critics have long marveled at the poet's gift for capturing the speech of the region's natives and his realistic evocations of the area's landscapes. This compilation, first published in 1923, earned Frost the first of his four Pulitzer Prizes and includes several of his best-known poems: "Stopping by Woods on a Snowy Evening", "Nothing Gold Can Stay", and "Fire and Ice", as well as verse based on such traditional songs as "I Will Sing You One-O".

Winner of the 1924 Pulitzer Prize for Poetry.

What listeners say about New Hampshire

Robert Frost was a magical nature writer. Nature as in human nature. Magical as in making the imagined seem like the observed. This performance of his poems is both reticent and exalted. The perfect voice for quiet truths. I expect to keep returning to it for inspiration.

I fear I under appreciate Robert Frost’s poetry.

As I read or listen to Mr. Frost’s poetry I often belittle it as too simple, too primitive. But They say that the true master is one who promotes just such a reaction among her readers and/or listeners.

I throughly enjoyed the narration and want to hear more works read by this artist.

Interesting to listen to.

Frost's poems are an enjoyable listen. I enjoyed. Good with a hot cup of coffee or glass of wine.

I absolutely loved this book of poetry!! The author is a favorite of mine since I was a child and I am 70 now. His poetry has survived the test of time, as far as I am concerned.

Not my favorite Frost, but still worthwhile for

Unlike the affirmative action poet Angelou, Ribert Frost was the greatest ever in this country. He could use free verse, all that Angelou can manage since she doesn’t approach his intelligence, but his best verse involves his wonderful rhyming; like Stopping by Woods.

Before reading this collection of poems centered around "New Hampshire" as the setting, I only knew of Robert Frost from his poem "The Road Not Taken", which was taught in high school I believe and which I enjoyed. I admit I was looking for something similar, and while the diction is similar the subject of these New Hampshire poems are more light hearted and comedic in nature than what I was expecting.

"New Hampshire" has gotten good reviews because it does a good job of representing the people of that state at the time he was writing. There are characters of woodsmen and the working class, and I think many people who enjoy authors like Jack London and Laura Ingalls Wilder would enjoy this set of poems. I just didn't feel like these poems were deep or insightful in the way I prefer poetry to be, but I recognize the straight forward approach Robert Frost has to poetry makes his work accessible to many who would not otherwise choose to read poetry. There was one or two poems that included instances of animal abuse in a logger/Paul Bunyan type of way, like you would see in the movie "Spirit", so while I get that this kind of thrashing beasts of burden was accepted in the late 19th to early 20th centuries, it still disturbed me.

Overall, I respect Robert Frost as a renown American poet and I am glad that his works are still classic and spread widely today. However, I did not personally enjoy these stories a lot, and do not think I will want to listen to them again. I also felt that these poems might be more nostalgic to those who currently or have lived in New Hampshire, which I have not.

Treat yourself to the beauty of this book. The narrator John Lescault delivers this with what appears to be personal understanding of nature and the town as Robert Frost wrote this special wonderful book.

A wonderful book that I found to be developmental and maturative for a young man comming of age such as myself. I found this book to be worthwhile and generally intelligent and I further highly recommend this book.

a delightful collection of poems from Robert Frost. I enjoyed them thoroughly and wish to ueah more poetry.