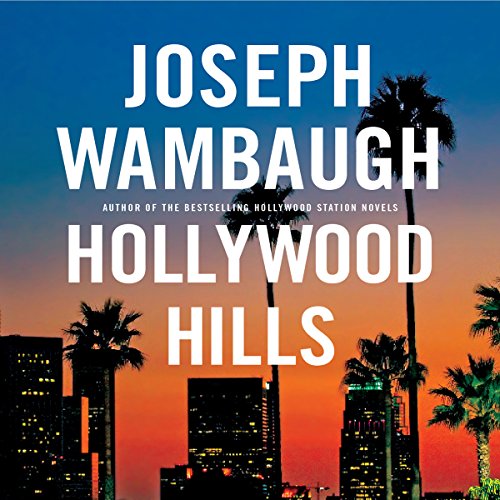 By: Joseph Wambaugh
Narrated by: Christian Rummel
Try for £0.00

The legendary Hollywood Hills are home to wealth, fame, and power - passing through the neighborhood, it's hard not to get a little greedy.

LAPD veteran "Hollywood Nate" Weiss could take or leave the opulence, but he wouldn't say no to onscreen fame. He may get his shot when he catches the appreciative eye of B-list director Rudy Ressler, and his troublemaking fiance, Leona Brueger, the older-but-still-foxy widow of a processed-meat tycoon. Nate tries to elude her crafty seductions, but consents to keep an eye on their estate in the Hollywood Hills while they're away.

Also minding the mansion is Raleigh Dibble, a hapless ex-con trying to put the past behind him. Raleigh is all too happy to be set up for the job - as butler-cum-watchdog - by Nigel Wickland, Leona's impeccably dressed art dealer. What Raleigh doesn't realize is that under the natty clothes and posh accent, Nigel has a nefarious plan: two paintings hanging on the mansion's walls will guarantee them more money than they've ever seen.

Everyone's dreams are just within reach--the only problem is, this is Hollywood. A circle of teenage burglars that the media has dubbed The Bling Ring has taken to pillaging the homes of Hollywood celebutants like Paris Hilton and Lindsay Lohan, and when a pair of drug-addled young copycats stumbles upon Nigel's heist, that's just the beginning of the disaster to come. Soon Hollywood Nate, surfer cops Flotsam and Jetsam, and the rest of the team at Hollywood Station have a deadly situation on their hands.

What listeners say about Hollywood Hills

They have plot, strong characters, laughs, all boxes ticked. Wambaugh knows his onions and is outstanding in his field.

By Wambaugh, Hence A Standard For Others!


Now this is part of the Hollywood Station series which you really must start with, 'Hollywood Station: A Novel' and then listen your way along to this, the 4th in the series. This ensemble is as good as police procedurals ever get. And Wambaugh is writing as well as he ever has. So well that this series is a standard by which I evaluate most others.

This book is why in years to come, people will congratulate you for living in the Age Of Wambaugh.

This latest in Joseph Wambaugh's LAPD Hollywood Station series does not disappoint. Wambaugh's insight into human nature gives the listener multi-dimensional characters from every imaginable walk of life; his past experience as an LAPD officer provides the necessary "reality base" for the cops' perspective. But I have to say that Christian Rummel is the reason no reader who likes Wambaugh's humor, story line, and pathos can pass up this audible book. Rummel's ability to take on countless characters' voices, each completely different from any other, and his smooth, extremely easy-to-listen-to narration make this a must-have! Great addition to the series!

This story didn't work for me at all. The writing and character development are no better than what you'd expect from someone taking their first fiction/crime writing course. As someone who knows the LAPD intimately, I'm also confused by the various department-specific references, some of which are current to the story (consent decree) and others that are outdated (rovers vs Astros). But the main issue is the story and dialogue. Sorry

Another good turn from the Hollywood Hills PD crew

Look, if you want Pulitzer level fiction, this isn't it. What you get from Wambaugh's tales of this Hollywood PD unit is solid, fun storytelling and a memorable cast of characters that have been together long enough now (4 books' worth) to become nicely familiar. The core group, led by the surfer cops Flotsam and Jetsam, Snuffy Salcedo, and Hollywood Nate Weiss are the (audio)literary equivalent of comfort food, satisfying and warm. I hope to see another turn from both this crew and the reader, who did a terrific job in giving each character a unique voice.

Forced myself to listen to the first half...then gave up...waste of my money-don't waste yours

Not one of Wambaugh's better ones

Story never got going. I almost abandoned it midway and I should have and I wouldn't have missed much.