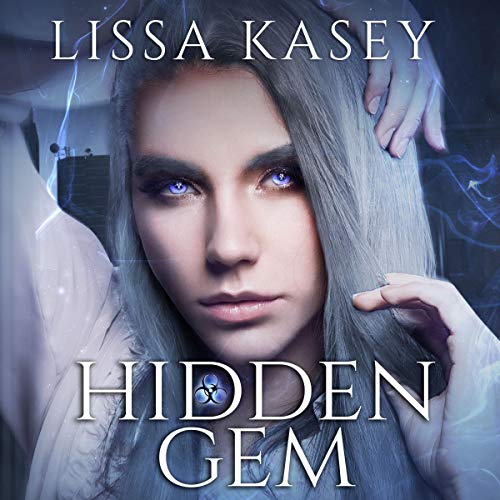 By: Lissa Kasey
Narrated by: Adam McLaughlin
Try for £0.00

The sparkling jewel of the Hidden Gem, City M’s most renowned brothel, Misaki “Aki” Ito is living the good life. He’s not subjected to torture for his psi abilities, he has a roof over his head, food to eat, and all the sparkly shoes he could dream about. He also has one particular regular he can’t get enough of, Shane McNaughton, even if Shane occasionally asks for Aki’s help on a case.

Shane is a cop specializing in missing persons. He’s good at finding people, not just because of his years as a seasoned detective, but because he survived the Third World War and resulting plague with a few supernatural abilities himself. Mutated by the virus that wiped out two thirds of the world’s population, Shane no longer considers himself human. Which is why he limits his visits to a very breakable psi companion when not working a case, no matter how much he might want Aki.

When a high ranking official’s daughter goes missing and feared dead, Shane has no choice but to ask Aki to use his abilities to help him track down the kidnapper. The case opens a door to a past Aki thought he had escaped. Will Shane’s love be enough to save them all when something dark is awakened inside of Aki?

What listeners say about Hidden Gem

Not an easy story to listen to. Parts were painful but in a good way. savagery mystery and a sweet love story

The audio version is much more intense than the print edition version, imho. The narrator does a fantastic job. The story starts off on a lighter note but the action and plot spins up and pulls you in like a whirlpool. The conclusion is satisfying. Recommended.

Fantastic beginning to a fantasy series!

The narration – This is a new-to-me narrator, and at first I struggled with him, as he sounded quite gruff and a bit older than I expected. But that all disappeared as he started doing the various character voices and I warmed up to him quite quickly, especially with his brogue for Shane. I really hope he is selected for the rest of the series and that they go to audio as well.

The story – I honestly thought this was a new-to-me author as well. It wasn’t til I read her Goodread profile, and saw my checklist that I realized she also wrote the Dominion series. I had purchased them long ago, but they got lost in my tbr pile. I will say, after listening to thus book, she will definitely be going higher on my list of authors.

Well, unless of course you are a client scared of or prejudiced against a psi such as he, very obvious from the color of his eyes. The backstory in Aki is very fascinating and tidbits are revealed slowly, letting us as the reader know there is more to him even than he seems to know himself. I loved the pacing and the way things were hinted at without feeling like I was being ‘fed’ the storyline. I got to feel it all along with the character.

POVs do change but the majority is from Aki’s point of view, and it works well because so much of what he knows is buried in his psyche and is fascinating as the layers peel away.

Shane is just what he is. A rough around the edges cop/shifter that has a softness in his heart for Aki. It doesn’t seem so at first and I almost got mad at the way he was so accepting of Aki’s lifestyle and the pain Aki had to endure to be of use in the detective’s investigation. But as more is revealed, it pretty much had to be that way. It was something he discussed with Aki, and he didn’t want to ‘clip his wings’ so to say, making sure Aki felt free to do what he needed after a life of servitude. Aki’s past is extremely traumatic, and I could see why certain things had to be handled delicately.

There are many villains in this story, and many supporting characters to begin to care about. Honestly, after finishing this book the first thing I did was go out and purchase the next 2 in the series, as the MCs in them are both characters we get to know in this first book.

There were some scary and heart in my throat moments, and even a few times I teared up a little. The things they each did and had to understand about the others’ vulnerabilities and scary strengths really got me to thinking. I even went and relistened to the book a few weeks after and enjoyed it just as much!

If you are someone that enjoys coming across something a bit different, enjoy paranormal and dystopian elements, this book is a winner for you! I just hope the publisher decides to complete the other books in the series as audiobooks. I LOVED this book, enough for a relisten a few weeks after my initial investment. A serious winner here!

I received a copy of this audiobook in exchange for an honest review.

rediscovered my love for this book

This book is about so many things. It's about a young man who's had a hard life wanting simply to be loved. It's about a past that refuses to to let go, and overcoming what the world thinks of you. It's a book of fun, romance, personal empowerment, all wrapped up in a dystopian shell.

What does Adam McLaughlin bring to the story that you wouldn’t experience if you just read the book?

The narrator does a good job of varying voices and adding basic sound effects like laughter. I really enjoyed this narrator.

Narrator skipped too much

I love the story, but when listening and reading I realized the narrator was constantly skipping parts or moving the things said around as if realizing a part was skipped (if he did that every time he skipped would be one thing but it’s not.) some parts skipped were impactful to the story and of the character development. So that sucked but the story was great & filled With awesome, very intriguing characters.

Well this was different

I really enjoyed this! I was not 100% sure from the summary but WOW, lots going on here! Shane the detective is totally an alpha male and little Aki is pretty amazing too! I’m looking forward to listening to Paris and Candy’s stories too!

Enjoyed the premise, but the narration was... off

I really liked the premise of the story, the slight dystopian feel to it and the cover screaming 'Yaoi' but sadly, between the narration and the often choppy waters of the storyline, I was confused and left scratching my head.

A different narrator! He nailed Shane, I'll give him that. And the pompas windbag that "owned" Aki sounded pretentious and entitled, which fit his character as well. I don't quite know why Aki and Candy were given such annoying, nasally voices.

You know, I can't rightly say because half the time the narration grated on my nerves.

Did Hidden Gem inspire you to do anything?