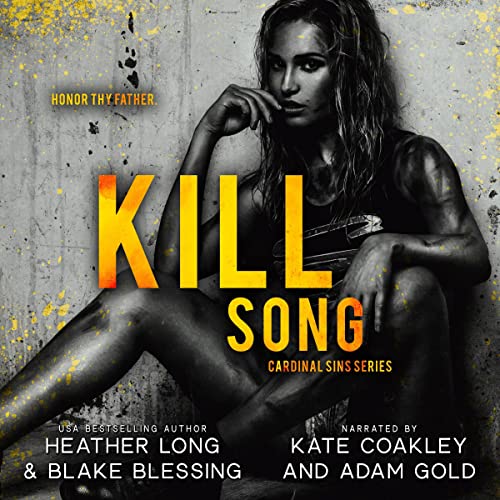 There are four types of serial killers.

I’m looking for one.

He’s male, likely in his 40s or 50s now. He’s been killing successfully for more than three decades. I suspect even longer, though our timeline is based only on the earliest victim we’ve identified with his signature mark.

Seventy-nine kills that we are certain of.

A year ago, the unsub’s methods changed. It was a subtle shift. Instead of one or two bodies a year, five have been dropped. Forensic evidence remains inconclusive, but in my gut, I know something’s changed.

Either the unsub has a partner or he’s about to become a spree killer.

It’s only a matter of time before someone puts the coin into the right slot and the kill song begins.

Finding the unsub is my obsession. It was my father’s. He died without solving the mystery.

Kill Song is a full-length dark adult romance and psychological thriller with suspenseful themes. Any trigger warnings will be included in the foreword. Some situations may be uncomfortable for listeners. This is a reverse harem novel, meaning the main character has more than one love interest. This is book one in the series.

What listeners say about Kill Song

So heather long is one of my favorite authors so I knew this was bound to be a good book. However I’m new to blake blessing! They did not disappoint with this one. I didn’t read anything before diving in and I was immediately caught off guard in a very interesting and good way that hooked me from the beginning. Love that book 2 is already out for me to dive into! And the narration is great! This is also the first time I’ve listened to either of them and they both did amazing! I’d recommend this book to my book friends for sure!

Loved the story line and narrations!! I am super glad I decided to listen to this one!! Love the direction it is headed!

The story was great keep me on my toes with the twist and turn of the story line. I always love a dark romance and a strong female lead and this story had this in Spades.

The narrators are incredible!
Heather & Blake have created an addicting, twisted, and funny new series. Must listen!!!