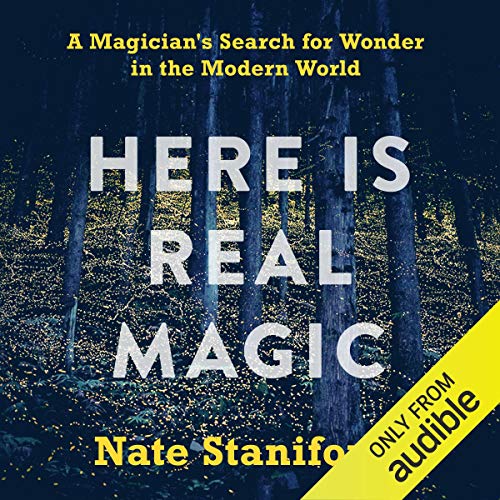 An extraordinary memoir about finding wonder in everyday life, from magician Nate Staniforth.

Nate Staniforth has spent most of his life and all of his professional career trying to understand wonder - what it is, where to find it and how to share it with others. He became a magician because he learned at a young age that magic tricks don't have to be frivolous. Magic doesn't have to be about sequins and smoke machines - rather, it can create a moment of genuine astonishment. But after years on the road as a professional magician, crisscrossing the country and performing four or five nights a week every week, Nate was disillusioned, burned out and ready to quit. Instead, he went to India in search of magic.

Here Is Real Magic follows Nate Staniforth's evolution from an obsessed young magician to a broken wanderer and back again. It tells the story of his rediscovery of astonishment - and the importance of wonder in everyday life - during his trip to the slums of India, where he infiltrated a 3,000-year-old clan of street magicians. Here Is Real Magic is a call to all of us - to welcome awe back into our lives, to marvel in the everyday and to seek magic all around us.

What listeners say about Here Is Real Magic

Wonderful story of the search for wonder, leading to a fascinating trip across India. Well narrated by the author.

Exceptionally well written and performed by Nate himself which left me missing his wife too!

I loved this book! After finishing it, I was looking for wonder (even whilst stuck in traffic and late for work). I found it. Thank you Nate.

Loved this book . Being a magician myself I found this book to be very interesting and exciting. Many thanks to Dominic Reyes who kindly recommended this book .

Wow...Wonder in the real world!

Being a magician made me appreciate this work, even more than the casual listener who stumbles upon this work by chance.

It’s refreshing to listen to a fellow practitioner and excellent story teller, recite an eclectic journey of searching for wonder.

It’s informative, reflective and heavily engaging. I’d recommended listening to it / reading it as soon as possible.

It will help you discover wonder again.

This is a very entertaining and great look at the life of a magician. If you love magic, whether you perform or not you will love this. Mate, you are the man!

An inspirational story from a unique voice

This book starts with a bang and holds your attention for well for the first 2/3 of the story. It is fastinating to hear about someone who is passionate about something and chases their dreams. It is clear that Nate is an expert magician and has dedicated himself to his craft, as well as the history of the profession. I enjoyed the clear and honest voice this book was written in as we as the performance given in the audiobook.
I accept the premise that magic is a way to create wonder and that the point is not to figure out how the illusion works but rather the experience itself. This book seems to be written with the notion that the reader will be resistant to that premise, because I was not, I found the tone a little more intense than it needed to be at times. I also thought this point was repeated a little more than it needed to be.
The pace of the story was just right for me all the way to getting to India, once there it seems to wonder a bit, much like the journey the author is describing. While it is clear that the journey was rewarding and rejeuvinating for the the author and many of the the events described on this journey are interesting, it is unclear what the take away was... I think it is in the last lines where the author talks about concisely push off the weight of the world and finding wonder again in your life.
I am left wondering if Nate found the answers he was looking for, if he feels more fulfilled in his professional life now and what has changed in his life and in his show since he returned.
I want to be clear, I really enjoyed this book! I am offering an honest review because it was so good. As an designer myself I can't help but think of further improvements that can be made.
Thank you for sharing your story Nate I truly enjoyed it!

I stumbled upon this book and bought it on a bit of a whim, and then started listening and quickly realized that I had made a very, very good decision. It was amazing! I finished it in one day - very rare for me. I was so pulled in by his fascinating stories, his soothing voice, his superb writing, and, most of all, his thoughts on wonder. It was so interesting and convincing. I want to listen to some parts again, to let those ideas really settle into my brain. I am left really contemplating the connection between a lack of wonder in life, and spending my days feeling weighed down by my responsibilities, stressors, even, in a way, ambitions. His idea of, instead, finding a way to stay awed by all the “magic” that surrounds us, all of us, every day, and letting that wonder fill you up as a means to become more resilient to the constant weight of stress and anxiety and disappointment - I love that idea. It makes sense to me. It feels attainable. After all, how can I stay disappointed about anything when every night I can look up at the stars and be surrounded by infinite, beautiful mystery? Where there is mystery, there is hope. A+ all around.

A look into the REAL secrets of magic!

Magician Nate Staniforth does what many people dream of doing but, sadly, few will ever attempt...he discovers and digs into the secret of a magic trick many of us perform daily and are completely unaware we're doing it...

Nate will learn that being comfortable and not following your desires is the greatest deception of our lives.

Setting out to try to learn more about the moment of astonishment that occurs when someone witnesses a strong magic effect, Nate finds himself on what becomes a very personal, transformative journey that takes him to the other side of planet in search of answers.
Along the way he meets some incredible people that will teach him the real meaning of magic and just how important it is to our lives.

I expected a write-up of life on the road and stories of a magician...
This book has that...
But it contained much, much more.
Nate's narration is passionate and personal. What you think will be a "road diary" becomes a funny, thoughtful, touching and personal search for something deeper. During the course of the book, you'll hear Nate mature as he meets person after person who cause him to rethink magic as an art form as well as a tool for crossing cultural barriers.
It's just an incredible story of someone who needed answers so badly he does what most won't do...
He goes on an amazing road trip that will leave him exhausted, disenchanted, triumphant and humbled doing what most of us won't....
Taking action in order to learn about ourselves, what we want in life, Nate discovers the secret to real magic...
And asks that we all take the time to do so as well...
Because if we don't, we'll always find ourselves looking at those who do and ask ourselves...
"How'd they do that?"

Title lives up to the book

Never read anything like this. If you love wonder, if you see through the fabric of the world, this book will let you know that you are not alone. One of the best! Thanks so much Nate.

A worthy dive into why magic matters.

His honest search is revelatory in terms of our purpose in creating a moment of astonishment.

Redefines what magic is for me

And turns it into a powerful experience about life. No pun intended but it is a magical book that moved me deeply. Thank you Nate.

This was a magical travelogue for the mind. Thank you, Nate, for the word paintimgs.

I loved this and I'm really happy I finally got around to it after Brian Brushwood of Scam School / Modern Rogue made me aware it existed!

Helped me to rediscover the magic in everyday life

Amazing journey of a magician to re discover his passion. Along the trip we too discover the fact that we are human beings , human beings with a gift to have wonder... Loved the book and changed my life ... Thanks Nate .

A clarion call for enchantment

Nate delivers his own remarkable story, his quest for real, authentic wonder and awe, in a deliberate and soothing tone. It’s a must read for anyone experiencing disillusionment, for anyone trying to align with their own true path, and for grownups who have forgotten how to fall upward into the night sky.