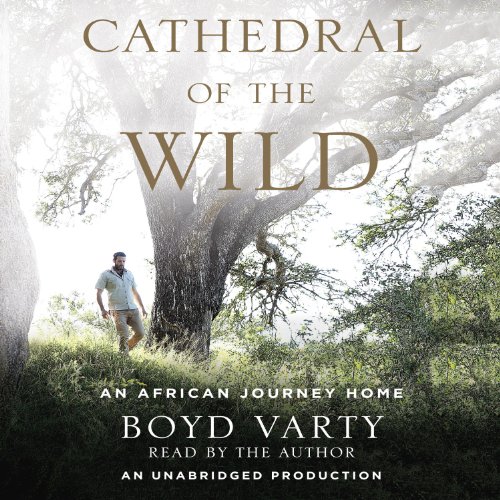 Cathedral of the Wild

“This is a gorgeous, lyrical, hilarious, important book.... Read this and you may find yourself instinctively beginning to heal old wounds: in yourself, in others, and just maybe in the cathedral of the wild that is our true home.” (Martha Beck, author of Finding Your Own North Star)

Boyd Varty had an unconventional upbringing. He grew up on Londolozi Game Reserve in South Africa, a place where man and nature strive for balance, where perils exist alongside wonders. Founded more than 80 years ago as a hunting ground, Londolozi was transformed into a nature reserve beginning in 1973 by Varty’s father and uncle, visionaries of the restoration movement. But it wasn’t just a sanctuary for the animals; it was also a place for ravaged land to flourish again and for the human spirit to be restored. When Nelson Mandela was released after 27 years of imprisonment, he came to the reserve to recover.

Cathedral of the Wild is Varty’s memoir of his life in this exquisite and vast refuge. At Londolozi, Varty gained the confidence that emerges from living in Africa. "We came out strong and largely unafraid of life," he writes, "with the full knowledge of its dangers." It was there that young Boyd and his equally adventurous sister learned to track animals, raised leopard and lion cubs, followed their larger-than-life uncle on his many adventures filming wildlife, and became one with the land. Varty survived a harrowing black mamba encounter, a debilitating bout with malaria, even a vicious crocodile attack, but his biggest challenge was a personal crisis of purpose. An intense spiritual quest takes him across the globe and back again - to reconnect with nature and "rediscover the track".

Cathedral of the Wild is a story of transformation that inspires a great appreciation for the beauty and order of the natural world. With conviction, hope, and humor, Varty makes a passionate claim for the power of the wild to restore the human spirit.

Praise for Cathedral of the Wild

“Extremely touching... a book about growth and hope.” (The New York Times)

“It made me cry with its hard-won truths about human and animal nature.... Both funny and deeply moving, this book belongs on the shelf of everyone who seeks healing in wilderness.” (BookPage)

"This is a gorgeous, lyrical, hilarious, important book. Boyd Varty is as brilliant a storyteller and as kind a companion as you’ll ever meet. He describes a life that has been spent forging a new way of thinking and being, in harmony with both Nature writ large and the human nature that is you. Read this and you may find yourself instinctively beginning to heal old wounds: in yourself, in others, and just maybe in the cathedral of the wild that is our true home." (Martha Beck, author of Finding Your Own North Star)
" Cathedral of the Wild is the captivating story of the joyful, occasionally terrifying, but always interesting life of Boyd Varty. It is also a tale of healing, and of one family’s passion to restore our broken connection to nature. Be prepared to fall in love with Varty, his sister, his parents, his uncle, the ideals they fiercely hold to protect the African bush, and the wild animals and people that surround them. With his campfire wit and poet’s ear, Varty is a wonderful new voice in adventure writing." (Susan Casey, author of The Wave: In Pursuit of the Rogues, Freaks, and Giants of the Ocean)
"[An] intense, insightful memoir that brings together several wise observations about the relationship between nature and humanity.... Varty faces his own trials...leading to a spiritual renewal that elevates this memoir above the usual wilderness narrative." ( Publishers Weekly)

What listeners say about Cathedral of the Wild

One of my favorite audiobooks

I had listened to the Elephant Whisperer and was wanting to continue on with the African genre. I loved this book, I think even more than the Elephant Whisperer, which was hard to beat. I enjoyed Varty's narration, and how in the last third of the book, he drops into some deeper stuff. Excellent writer, and at moments beautifully poetic, but not cliche or silly at all. He is a great storyteller and does not disappoint.

I absolutely loved this story and hope there will be future tales from Boyd Varty. He tells a great story that opened my beliefs on mysticism and the animal world. He brings you to Africa and the dangers and wonders of Africa's animals. I appreciate all he and his family are doing to help protect the animals of Africa. Long live his reserve and all animals of Africa!

This book touched me deeply. A beautiful story of a young man's life growing up on a family owned wildlife preserve and how our connection to the land and animals is vital to emotional health and well being, our survival and the survival of the planet. I now want to restore my humble acre of property to it's natural native state and witness the magic that comes with that. Thank you BV.

Came for the game, stayed for the philosophy!

Lovely, vivid portrait of growing up in Africa. Profound and touching story of attending the school if hard knocks, also known as life. Glad the author was the voice throughout. Boyd Varty is easy to like.

This was an easy book to get through. I went into it not knowing anything about book or author and it was enjoyable.

Takes me home to Africa

Unbelievable.. devastated it's over. Makes me want to return back to managing a safari camp in my home country Zimbabwr.

Truly the best book I have read in years!

I am still astounded by this story and the authors beautiful style. I am captivated by very few books. This book touched my core and will forever live in me. Thank you, Boyd Varty!

Boyd Varty tells the tale of building a thriving game preserve in South Africa, on land previously destroyed by farming. The story is tough, tender and restores its listeners. I feel closer to nature now as well as my own true nature. Thank you Boyd!

What did you love best about Cathedral of the Wild?

I've been to South Africa on a safari and found the background info about how the region was saved for the animals really interesting. It was a wonderful experience to have been there and heightened now by this book.

I liked learning about the struggles to repair the land but also how that affected the family.

I really wish that authors would leave the reading of their books to those that are trained. At first I thought I had the speed setting on fast, but when I set it down a notch, the pace was dismally slow. I think I wasn't just the quickness of the speed at which it was read, but also the pacing and phrasing. It could have been so much better with some pauses for affect to the story line and just for the ease of listening. It should pace as a person would normally speak..

I hope he writes more. I would like to know how the preserve grows, if the family wins the law suit, if he marries and is his family in good health. Oh! can his uncle make a go of his cat farm,