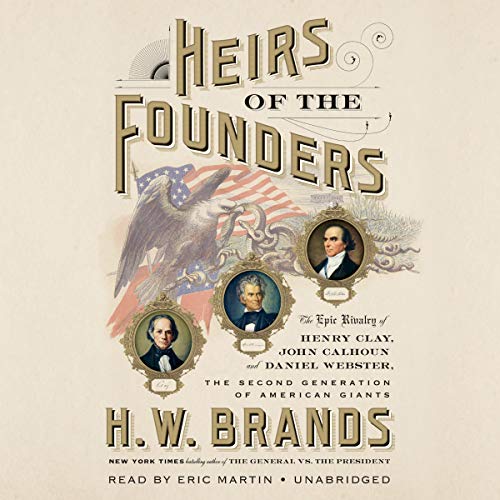 Heirs of the Founders

From New York Times best-selling historian H. W. Brands comes the riveting story of how, in 19th-century America, a new set of political giants battled to complete the unfinished work of the Founding Fathers and decide the future of our democracy

In the early 1800s, three young men strode onto the national stage, elected to Congress at a moment when the Founding Fathers were beginning to retire to their farms. Daniel Webster of Massachusetts, a champion orator known for his eloquence, spoke for the North and its business class. Henry Clay of Kentucky, as dashing as he was ambitious, embodied the hopes of the rising West. South Carolina's John Calhoun, with piercing eyes and an even more piercing intellect, defended the South and slavery.

Together these heirs of Washington, Jefferson, and Adams took the country to war, battled one another for the presidency, and set themselves the task of finishing the work the Founders had left undone. Their rise was marked by dramatic duels, fierce debates, scandal, and political betrayal. Yet each in his own way sought to remedy the two glaring flaws in the Constitution: its refusal to specify where authority ultimately rested, with the states or the nation, and its unwillingness to address the essential incompatibility of republicanism and slavery.

They wrestled with these issues for four decades, arguing bitterly and hammering out political compromises that held the Union together, but only just. Then, in 1850, when California moved to join the Union as a free state, "the immortal trio" had one last chance to save the country from the real risk of civil war. But by that point, they had never been further apart.

Thrillingly and authoritatively, H. W. Brands narrates an epic American rivalry and the little-known drama of the dangerous early years of our democracy.

“Lively and learned... Brands has produced a narrative that pulsates vigorously... The three senators wear themselves out and all but die on the job, their respective causes still unresolved, their long public service having earned them fame, but not the political prize for which they most lusted: the presidency (though not for want of trying).” (Harold Holzer, Wall Street Journal)

“Brands’s easy prose and superior, simple organization makes this work an engrossing, entertaining, and educating read on issues important then that echo today in the modern debate on the limits of federal government power.” (Robert Davis, New York Journal of Books)

What listeners say about Heirs of the Founders

I have read and enjoyed a number of historian H. W. Brands’ books. This book is about the “Great Triumvirate” as they were known. The great orators from Massachusetts, Daniel Webster (1782-1852), John Calhoun (1782-1850) of South Carolina and Henry Clay (1777-1852) of Kentucky. These three great men were principal legislators in the post Jacksonian debate over slavery and States Rights. They were the key players of the Missouri Compromise of 1850. None of the men lived to see the Civil War.

The book was well written and meticulously researched. The book is easy to read and understand for a lay person. Each of these men played key roles and served in various positions in the government during their years of service. What I enjoyed the most was listening to the debates between the three men over various issues over their years in office. These three men were the greatest debaters of their era. If you are interested in United States history, you must read this book.

The book is fourteen hours and fifty-five minutes. Eric Martin does an excellent job narrating the book. Martin is a well-known audiobook narrator and voice-over artist. He has won many Earphone Awards and was a 2015 Audie Award Finalist.

If you're looking for a fresh perspective on the period leading up to the American Civil War, this is a good place to start. “Fresh Perspective” is practically HW Brands’ middle name. As in his other books about the 19th century, he approaches history by way of biography, in this case through the stories of an ardent proponent of slavery (Calhoun), an opponent (Webster), and a man devoted to preserving the Union, whatever compromise is required (Clay).

Two other people haunt the narrative as well. Through much of it, especially in the early part, Andrew Jackson plays a major role: in fact the book begins with an account of his victory at New Orleans in 1815. Brands has written a biography of Jackson, and I don't know how much is duplicated here. Whether you consider Jackson the Great Democratizer or the Great Destroyer will depend on which aspect of his presidency you choose to focus on. Personally, I’m inclined to the second: while he saved the Union in the nullification crisis, he destroyed dozens of other nations — nations of non-white people, of course — in his embrace of white supremacy.

Another person who makes his appearance late in the book is Solomon Northup, the man who wrote Twelve Years a Slave. Brands narrates the political debates about slavery in detail, but doesn't discuss the actual conditions of slavery until he comes to Northup’s story. If there is a weakness in the book, it's here: although he gives a passionate and moving account of Northup’s own suffering, Brands omits a lot of what Northup had to say about the suffering of those around him.

This is not a wide-ranging cultural or economic history of the pre-war period like What Hath God Wrought by Daniel Walker Howe or Waking Giant by David S Reynolds. Brands is doing history by way of biography, and he keeps the focus pretty steadily on his three main participants. As in his other books, Brands is generous in his quotations from letters and speeches, to the extent (in this case) that I almost felt I was sitting in the gallery in Congress watching the debate. Without access to any of the notes or bibliographical references that may have accompanied the text, I have to assume many of these speeches represent cleaned-up and maybe enhanced versions prepared by the speaker for posterity. But even so, they create a sense of immediacy that is sometimes lacking in accounts of the period.

Eric Martin’s narration is crisp, clear, and well-paced. When Brands’ narrative reaches an emotional peak, Martin allows his voice to express the emotion, rather than trying to keep the tone on a reserved, “objective” level. Not everyone will appreciate that approach to history, but I did.

I'm looking forward to reading Brands’ next book in the “series”, The Zealot and the Emancipator, which takes up the parallel stories of John Brown and Abraham Lincoln.

“Heirs of the Founders” covers a lot of early 19th Century history, from the War of 1812 to the Missouri Compromise to the annexation of Texas to the Compromise of 1850. But there wasn’t a lot of new material or insight. It felt like a review of things I’d learned in high school.

The lives of John Calhoun, Henry Clay and Daniel Webster provide the framework, but some of the other figures are more intriguing. John Quincy Adams, after his presidency, returned to the House of Representatives as a visceral foe of slavery. The deep feeling of his quoted speech on abolition was more moving, to me, than the political rhetoric of Calhoun, Clay and Webster. Hot Andrew Jackson and cool John Tyler may have had as much influence, in their ways, as the title figures. H.W. Brands digresses at one point to recount at length the life of Solomon Northup of “12 Years a Slave.” That’s an important story, but here it felt like filler.

Clay, Calhoun and Webster were intense, brilliant and persuasive legislators, and this is good serious history. Much of the book is taken up with lengthy quotes from their speeches and letters. But that does not make for compelling listening, especially in the car.

I enjoyed some of Brands’ earlier histories, like The First American (Ben Franklin) and The General vs. the President (MacArthur/Truman). With my high expectations, I was disappointed by this thorough but often plodding book.

Heirs of the founders

Not only John Calhoun, Henry Clay and Daniel Webster the main characters in this,historical story, but a kidnapped free black man also of that time who's story also provided background on these days a decade before the civil war. very interesting how the statesmen compromised to bring forward means to deal with the slavery problem, yet still maintained their own philosophy and position on slavery!

This book presents a great deal of past history representing our current political situation. Our political resentments are as strong now as they were when these great statesmen lived.

History I Needed to Understand

Before I read this book, I couldn't have told you two facts about Presidents Martin Van Buren or John Tyler. Even though I am well-read on lots of American history, I must admit that my 1820 - 1850 history knowledge was weak. Until this book came out, I just wasn't intrigued by the book offerings for this history period. Thank goodness that this book grabbed me when I became aware of it on Audible.

Telling the history from the viewpoint of Henry Clay, John Calhoun and Daniel Webster allowed for the author to give a full history of all sides of political activities for this time. I know a book of this type is good if it intrigues me enough to do lots of internet research about other topics such as Marshall Supreme Court cases and America's war with Mexico.

On a personal level, I am as strongly convinced as I always was that the Civil War was about slavery and not primarily about states rights, but this book explained to me how people from the Southern states felt states rights protected them from burdensome tariffs and taxes supported by Northern states. I didn't know much about that reasoning before. The knowledge I received from this book exceeded my expectations.

I only gave 4 stars because there were some "dry" parts of this book that were too long, but the narration was good and I never wanted to stop listening.

interesting subject, but the book is lazy, full of quotation, and doesn't tell me anything about the time I didn't already know.

The next chapter in US history!!

Heirs of the Founders, Goes into enough detail, I'm now moving on to more detail after John Quincy Adams - before Civil War ... next Audiobook Andrew Jackson, then Henry Clay then John Calhoun then Daniel Webster... Then the story of John Brown,

Why? Knowledge is Power gotta push back against the hate America crowd, they learnt that way of thinking from leftist BigFedGovSchools

If I could give 0 stars for the narrator, I would

I think this is a very interesting book, but the narrator is so boring I had to stop after a couple of hours. There is no inflection in his voice, no way to discern whether something is exciting or very serious. I was into learning about early 19th century history and I particularly liked the part about Daniel Webster but I am returning the book because it is unlistenable.