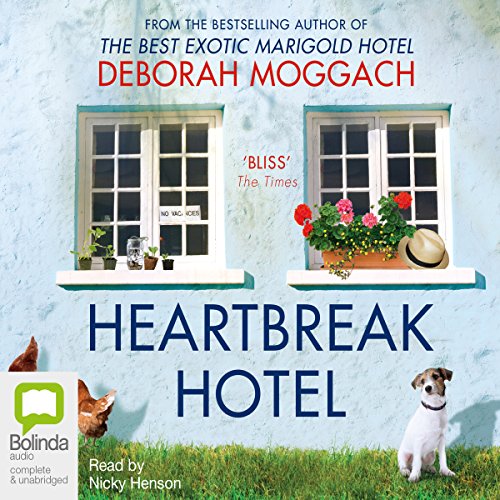 By: Deborah Moggach
Narrated by: Nicky Henson
Try for £0.00

The irrepressible Russell "Buffy" Buffery has upped sticks from London and moved to Knockton, Powys, to a B&B inherited from an old flame. With his future spread before him, and a string of failed marriages behind him, Buffy decides it's time for a new challenge.

Meanwhile: Harold's wife has run off with a younger woman leaving him alone with his as-yet-unwritten novel narrated by Mary Pickford's cat; Amy's weedy boyfriend has turned out to be not so needy after all; and Andy's partner's corset-and-suspender-clad attempts at seduction are having anything but the desired effect. They're all lost with nowhere to go, and feeling well past their sell-by dates. So they decide to enrol on "Courses for Divorces" in a sleepy rural town. Under Buffy's tutelage, they find themselves relearning all those skills they never thought they'd need again, and a whole lot more besides.

What listeners say about Heartbreak Hotel

I did not want the story to end.

This is the first of Debora Moggach's works I had come across and it will not be the last, It was like donning a very comfortable magic feel good bath robe I felt warm comfortable and fully engaged with each of the characters so much so I genuinely did not want the story to end. Thank you Deborah its been a very long time since I felt so cheered by a book I am now looking forward to enjoying your other works.

Was recommended to read this, but didn’t really want to, so I got the audio instead, very glad I did. Great narration, funny, and light-hearted enough to make two (otherwise dreadful) massive train journeys really enjoyable…. Perfect for a holiday listen or a commute and well worth a credit. I’ll definitely give Best Exotic Marigold Hotel a listen now.

I have read several Deborah Moggach books and was looking forward to this one but am probably not even going to finish it. The first turn off was the swearing which seemed superfluous and unnecessary - just added to make the dialogue "edgy". For me what makes a book are the characters - being drawn into their lives and stories. But Buffy is not really very interesting or real and the story itself all seems a bit self conscious - like it is trying to tick best seller boxes.

Entertaining but not outstanding

Whilst I enjoyed this story, I can't say that any of the characters are particularly memorable or that I was desperate to get back to it after each break.

I never felt that the story actually got off the ground.

I didn't particularly enjoy Nicky Henson as the narrator either although his voice is probably reflective of the central character.

This is not the most true to life book I have ever read but who cares? Anything that promotes the idea that it is never too late to find love and that we may pay for our mistakes but we don't have to be endlessly punished, gets my vote. The pivotal character, Buffy, is a down at heel 70 year old thespian who inherits a boarding house from a former landlady. Despite being a serial divorcee, Buffy maintains contact with his various wives and offspring, all of whom have a part to play in this heart-warming story of a flawed but charming man and his attempts to run a business targeted at recently separated people. Deborah Moggach has a light and witty touch but she is also refreshingly honest about troubled relationships and the ravages of old age. This is a story filled with life and without a dull moment. Getting older might be a daunting prospect but this book gives hope that there is still the possibility of better things to come.

I love Nicky Henson’s reading. He conveyed the slightly boozy but erudite voice of Buffy to absolute perfection.

This has got to be one of the best books I've listened to in a long time.

What other book might you compare Heartbreak Hotel to, and why?

Which character – as performed by Nicky Henson – was your favourite?

The main story is eventually set in Wales, though could have probably been anywhere, the story starts by outlining the various key characters and then slowly pulls them all together. I enjoyed Nicky Henson's narration and felt it was right for the main character. This is a pleasant view of some of life's interesting and complex relationships and self belief's. An enjoyable listening.

A pleasure, love all the different characters.

Buffy, the main character in this book, is an entertaining bloke, I'd like to meet him.. He has a tale to tell having seen life via his work, a actor and his glossy life in his marriages and extended family..He inherits a small B&B and his life changes from that of busy London to a village in Wales..

There are so many people in this book, each having individual characteristics and a life gone by.. All ages and all interesting with hopes and dreams. Not slushy more down to earth and funny too. Loved it.

Amusing at times, but this book never really lived up to expectations. I kept expecting a twist or a turn, but... Undeveloped characters and situations, all rather superficial. A lighthearted weekend read, worthy of three stars, it will fill your time, but it is far from memorable.

Love in your 'mature' years.

Deborah Moggach writes with a shrewd wit as she describes the relationships of her cast of thousands at a delapidated old hotel in the country town of Knockton, in Wales. This is a lighthearted book that would unveil many of its hidden perceptive gems on a second read.

To his surprise, aged Russell Buffery known as Buffy during his acting career, inherits an old B&B from his former landlady and friend, Bridie. Although he's a Londoner through and through, Buffy is becoming disillusioned with the way the capital is going and decides to up sticks to the country and try his hand at running a B&B.

The place struggles to make ends meet, so Buffy decides to advertise the place as a haven for divorcees and the abandoned. Here they can learn the skills that their partners formerly took responsibility for. Various weeks offer car maintenance, cookery, gardening and 'How to talk to women'. As a bonus, Buffy gets his car serviced, his garden weeded and the cookery done by his paying guests.

This very clever precept is the basis for a wealth of interactions and new relationships, as Ms Moggach lets her characters loose in Myrtle House.

I listened to this on Audible, which didn't really do the book justice because of the problem with referring back to remember who is who. It's a bit chick-lit in many ways but it is the underlying wit and perception that raises this book above other books of this genre. Those of our book group who had read Deborah Moggach's best book, Tulip Fever, didn't feel it was of the same calibre, but this one felt as though it would make an excellent TV series.

Deborah Moggach recently attended the Dubai Literary Festival and was hugely entertaining. I highly recommend seeing her if she comes your way.