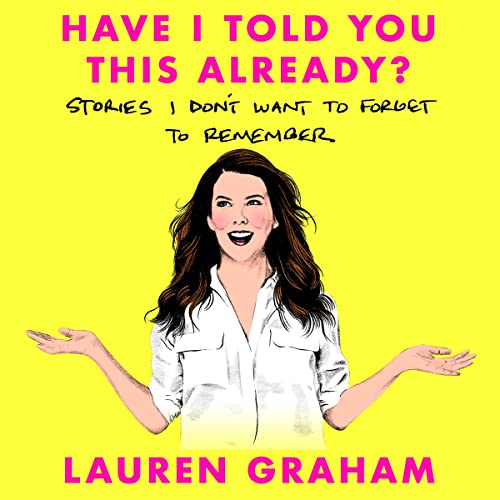 Have I Told You This Already?

From the beloved star of Gilmore Girls and the New York Times bestselling author of Talking as Fast as I Can comes a candid, insightful, and wildly entertaining essay collection about her years in show business, featuring stories that range from the sublime to the ridiculous.

Lauren Graham has graced countless television screens with her quick wit and larger-than-life personality, earning a reputation as a pop culture icon who always has something to say—and fast. Now Graham shares personal stories about her career in entertainment, from her early days navigating Los Angeles as a struggling actress in a red Volkswagen, to her first appearance on late-night TV, to the challenges of ageing gracefully in Hollywood. With her signature sense of humour and down-to-earth storytelling, she tells all and never spares a detail (as long as she hasn't forgotten it).

In 'R.I.P. Barneys New York' she writes about an early job as a salesperson at the legendary department store (and the time she inadvertently shoplifted); in 'Ryan Gosling Cannot Confirm' she attempts to navigate the unspoken rules of Hollywood hierarchies; in 'Ne Oublie' she warns us about the perils of coming from an extremely forgetful family; and in 'Actor-y Factory' she recounts what a day in the life of an actor looks like (unless you're Brad Pitt). She also welcomes back her alter ego Old Lady Jackson to share some more homespun wisdom ('Buy wrapping paper in January when it goes on sale') and reveal the easiest recipe for orange marmalade you'll ever find (which isn't actually easy, because easy recipes for marmalade are a total time suck and just another internet lie).

What listeners say about Have I Told You This Already?

Lauren is a fantastic writer, and her work is very engaging. she is honest, open, and extremely funny. I have read all of her previous work, so I knew this would be just as good.
She is open about the industry, being a celebrity, friendship, family, and even Old Lady Jackson makes an appearance.

Loved it as much as her other books, well ready, funny, her stories. More please Lauren, write faster 😊

If you’re looking for a book that’s a cozy hug, this is it. It was the perfect combination of funny, nostalgic and warm. Loved everything about it

More insights. A good listen with author narrating the essays. Interesting stories of an actors life.

Doesn't let you down

Collection of ramblings which we all can relate to in some way. Stories brilliantly told by Lauren, made the car journey to and from work fly by.

I love listening to Lauren's little anecdotes and wisdom whilst on my daily commutes. Her life is endlessly fascinating to me. beautifully narrated as always.

Loved every second of it!! Lauren is a phenomenal writer. Thanks for the essays x