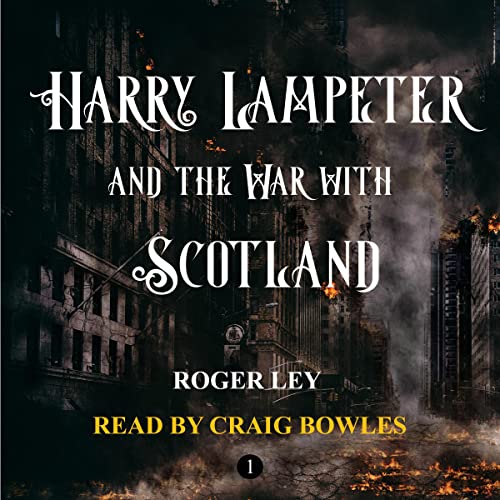 Harry Lampeter and the War with Scotland

The world has returned to the Steam Age. Incensed by cross-border raids from England, the Scots decide it's time to march on London. The English army heads north to stop them and MI6 send Harry Lampeter to report on the hostilities. General Malina’s American peacekeepers arrive as the battle for York begins. In between amorous entanglements, Harry discovers the Americans have a hidden agenda: the invasion of Europe. Meanwhile, Harry’s friend, Telford Stephenson, has joined the Scottish Air Force and is enjoying his own adventures.

What listeners say about Harry Lampeter and the War with Scotland

The world is going backwards to the steam age and airships and there is also uprising with the Scots, and you also have the American supposedly a peacekeeping force what is their real agenda.? Harry Lampeter British & Telford Stephenson a Scot have served together and are good friends and left the Air Force together, Harry goes to stay with his stepsister and Telford goes home to Scotland.
This is where our story starts the shenanigans that go on and a lot is going on with all the different characters, it's well played out naughty but nice as they say, well written by Roger Ley although I have the audio version and Craig Bowles did an excellent recording (kept thinking of Nick Sullivan) and not overly long but entertaining.

I need to start by saying I haven’t finished this yet, but I’m really enjoying it.

It’s fun, adventurous, and it doesn’t get too bogged down by describing the (plastic free) world it inhabits in minute detail… it can’t, it’s too busy telling the story, and sending the characters off into trouble.

A little bit of everything - historical details, facts, future possibilities , wit, humour, naughtiness, very likeable character (which narrator Craig Bowles brings to life perfectly). The story is fast moving yet it gives a very detailed account of everything. Love how realistic the characters are. So looking forward to reading more Harry Lampeter books.

Harry Lampeter and the war with Scotland

This review is for the Audiobook version.  Firstly thank you to Roger for allowing me to listen.  Now, although I am a Sci-fi fan,  steam punk adventures have never really grabbed my attention.  I've no idea why.  I love the Bioshock games.  So I'm glad I took the plunge.  Its a great start to a series.  Harry is a likable character and carries the story along at a good pace.  Funny,  historically accurate at times,  and since I'm from the future I can tell you it's future proof too.  (Disclaimer: Only one of those statements is true.)

Overall I really enjoyed it and look forward to the next in the series.  The narrator Craig coped well with the accents and has an easy to listen to voice.

How do you know when you're totally invested in a book? Let me tell you how it feels for me. I was listening to Graig Bowles narrating Harry Lampeter and the War with Scotland by Roger Ley and I was grinning away at Harry's shenanigans. At one stage, Harry's friends Felicity and Telford are driving through my home town and I thought to myself, "if only I'd known, they could have popped in for tea". Obviously I know they're not real and more than the state of the world in Mr Ley's brilliant series is real - except ....! Quite frankly it's all very credible and if I want to be upset that Harry Lampeter's friends didn't stop in when they were passing, then so be it. I'm a HUGE fan of Roger's writing, and Graig's narration and can't wait for the next book.

very enjoyable but not long enough

In a future without plastic, the world has entered a new steam age. Harry Lampeter comes to the attention of MI6 and is sent north to spy on the Scottish Invasion of England, then the American peacekeepers arrive. This is a fascination entertaining steam punk adventure with a light hearted style, satirical wit and some really nice touches. Well written with fun characters. I like Harry's sense of humour and attitude. Telford's more restrained ~Scottish personality, Love Harry's boss. A super start to a series that I will be following with interest I haver already bought the next one. The narrator is great, has a excellent easy to listen to voice and a good range. Hugely enjoyable. I Received a complimentary copy from the author and am leaving a honest voluntary review

This was such a brilliant listen - the narration so suited the story, I could just imagine that I was there. It provided some back story to the other novels, now I have to go back and re-listen to those so I can listen to them in order.

This is a must read if this is your genre. I didn't think this was my genre until I experimented and now love this series.

I'm smiling wanting the next book. That should tell you something. The author captures his audience and the narrator is wonderful at story telling.

This a good series and I just purchased the follow up book. The story was a bit hard to follow and some of the characters was somewhat confusing due to you did not know more about the characters and were they really came from or what mind set they were in. Ever character is not what you think or almost this way throughout the story. Also characters were in someway flat and never changed much throughout story they did the samething always and was a bit lacking in personality or charm.
Another reason the story was hard to follow there was no back story what I mean is what time period, why was it so easy for the US take over other countries and finally why is true transportation is by airships or zeppelin. I belive the story would have flowed more easier if you a little more information in the form of if, why and how.
I do recommend the series worning the first book does just stop and leaves the reader hanging so if you read or listen to book 1 you will need to get book 2.

In the begining there was quite a few names thrown at you to remember, but by the end you knew who everyone was. all in all great listen if you like James Bond and steampunk then you might just enjoy this ride.

The Yanks are coming …..

Fan of war stories and conspiracies in a steampunk environment will be served !

The performance is remarkable!

When the world changes in such a way that friends end on the different sides of a conflict...
Will friendship win of rather earning money in service to your country?
Of course there will be a lot of extra things going on and lead to good or bad choices.
It ends on a cliffhanger and book 2 is definitely worth a listen.

This book was such fun to listen to as it has steampunk elements, romance and a war. I found myself laughing out loud at the antics of Harry and his friend Telford. The narrator Craig Bowles is perfect in his mixture of male and female voices and accents. Highly recommended!

I was given a copy of this audiobook in return for my unbiased opinion and review.

Steampunk and a fun time

Received an audio review copy from the author, this is an honest review. Narrated by Craig Bowels, comes a wonderful adventure with a steampunk flair. Harry Lampeter's life gets complicated as war is looming between Britain and Scotland and Harry gets to report on it; which allows Harry to enjoy himself in flighty romances and uncovering some juicy secrets of America's feelings of this war. Short, witty and a great way to spend a few hours of your time. Highly recommended.

Not quite what I was expecting, but still decent

I was expecting more of an action adventure, though this read as more of a mild espionage tale.  After switching mindsets, the book was a decent war novel with a bit of steampunk dress, airships, and what not added in.

Steam power, spies, and much more

A fun listen and a great storyline. I loved the narration. The author has a good mix of old, and new places in the near future that makes it very enjoyable.

A fun steampunk story. Sex, drugs and espionage in an anachronistic world. I enjoyed the word play and in general it's a solid story. The end leaves you hanging and needing the next book.

Was ok with this book until the jabs at current political BS and nation bashing started. I read to escape that crap, so f*ck off.