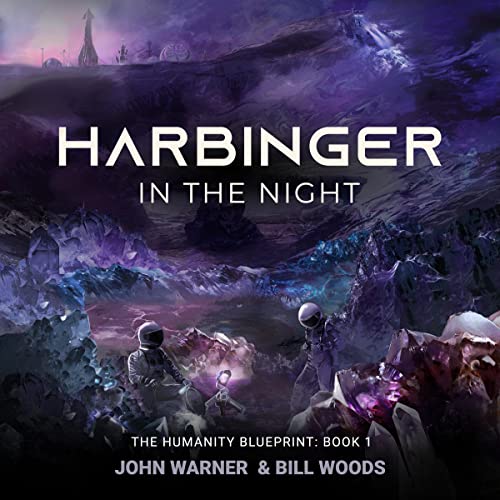 Harbinger in the Night

By: John Warner,Bill Woods
Narrated by: Darren Eliker
Try for £0.00

In the near future, a new space race is in full swing to be the first to colonize Mars. The United States and allied European governments working alongside private industry are competing against the RSAC, a new Russian-Chinese alliance, to build working spacecraft to make the long journey.

In preparations for the mission, an engineering team from an aerospace/tech conglomerate is building out the interplanetary communications network when a mysterious object emerges from the depths of interstellar space. As the nations of Earth scramble to investigate this strange comet, they must overcome plots from within and the machinations of a malignant AI in order to be the first to meet the menace, or the promise, that the intruder foretells.

Major Koda Cheveyo, a special operations soldier is tasked to lead his team to face this possible threat while Michael Thompson, a quantum computer engineer, works with his homebrewed AI to counter the emerging peril from within. Together with the help of a billionaire tech tycoon and a government security agent, their mission could reshape the future of humanity.

What listeners say about Harbinger in the Night

I was given a free copy of this book and I'm leaving an honest and voluntary review.

this is a nicely paced and very believable sifi. an exciting concept, great characters, its captivating, draws you and keeps your mind working.
the narration is perfectly suited for this sifi.
I'd definitely recommend this book.

Zipped through it over a weekend! I strongly recommend this listen. The book moves with a fast pace throughout with some very exciting and surprising passages. The basic concepts are feasible in the near future and well developed.
When talking about artificial intelligence the moral questions are not ignored and the fears of them becoming smarter than us are addressed though mercifully all with a competent light tough.
I look forward to book 2 of the Humanity Blueprint.
Regarding the reader, Darren Eliker gives life to the narration and renders both dramatic and background passages captivating.

Really good certainly glad to have found it!

Very good mix of first contact and super advanced AI with military scfi. I don't think I've ever read or listened to a novel that combined all those in one storyline so well. This audiobook should appeal to many different type of readers, honestly if this is a genre you like you should certainly get this one.

Keeps you listening must know what happens next and why is this happening the way it is kind of book. Narration is very good throughout

I was concerned about starting a new series with a new author, but I'm glad I did. The writing was superb and well paced. The sci-fi element was well thought out and felt realistic without just traversing into "magic". Overall, I am extremely happy I listened to this book and I recommend it to anyone who enjoys sci-fi material.

This story gives a deeper dive into the computer science behind technology that make this story a much more plausible science fiction tale that seems realistically plausible unlike some more far fetched science fiction stories. Some of the terminology may harder to understand for readers without a technical background, but the way this is written, it doesn't require a full understanding to be able to comprehend what is going on. The terminology just adds some juicy tidbits for people to latch onto.

The story itself grips you from the beginning to the end. There are twists, turns, reverses, slides, everything to keep you on your toes. There are multiple characters in this book that you grow attached to, while also questioning certain decisions they make. As you are reading this, you can practically visualize the scenes on a screen (TV or movie). With everything being in the realm of possibility of the near future, it really makes you think about how reliant we are on technology and how quickly we are advancing.

The voice acting is superb. Darren did a phenomenal job bringing these characters to life with a diverse set of pitches, dialects, and even robotic tones. Each character was different and recognizable just by the voice used and if I didn't know it was a book, I would think he was making the story up on the spot by how smooth the reading was.

Overall great read and I can't wait for the next book in the series.