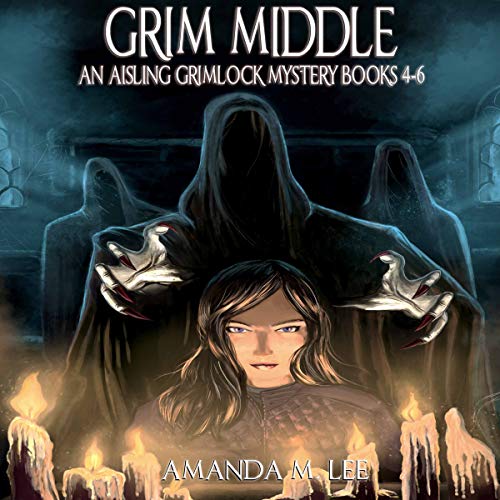 The one thing you can always say about Aisling Grimlock is that her life is never boring.

Not even for five minutes.

She’s a grim reaper by trade, a sister by birth, and a pain in the butt by choice. She lives in a world that’s always changing, rearranging, and even growing.

Join Aisling and her merry band of family and friends as they deal with the impossible, including the return of the mother everyone long thought dead, the wraiths that never seem to rest, and a visit from her boyfriend’s mother that just happens to come at the worst possible time.

All of her enemies seem to believe that Aisling is destined for greatness. All she thinks she’s destined for is constant sarcasm and the occasional headache.

You’ll have to listen to find out.

What listeners say about Grim Middle

Can't get past the narrator

I like Lee's books. I listened to the 3 books thinking I can get use to the narrator. Nope.
Her male voices are sterile.

The storyline has huge holes. Not that I expect expert transitions or anything but Scout's learning her powers is none existent.

loved it , really like they way this author always hits the spot with her books

I really enjoyed the series in the beginning but as it went on it seem to lose focus of the story and became repeated episodes of who loves who more. family scenes and scenes between the main character seem to be repeated over and over when the actual story line could have been expanded on.

just the right amount of sarcasm

I love ALL of Amanda's stories! They have comedy and sarcasm! Just what I need to keep the day interesting!

Amanda M Lee does it again. Love anything with the Grimlock family! Can't wait for the next book in the series.

It bothers me that the name John Anderson was reused in this book, from the last one, and yet nobody seems to know who this guy was…

is a simp. His hovering may come across chivalrous to some but I can't deal with his constant fear. Its a paranormal book not a crime novel but he must be the worst detective ever.

I am really enjoying this series! The family is still chaotic and humorous. The narration is great! The author did a great job with the character builds and plot. I love that you get 3 stories in one book. I look forward to reading more books in this series. I was given this free review copy audiobook at my request and have voluntarily left this review.

Absolutely love Amanda M Lee and all her series. Especially the audiobooks in boxed sets!

The Grimlock family is a snarky lots family who can solve any problem by working together. I thoroughly enjoyed Grim Middle (books 4-6) in this series.