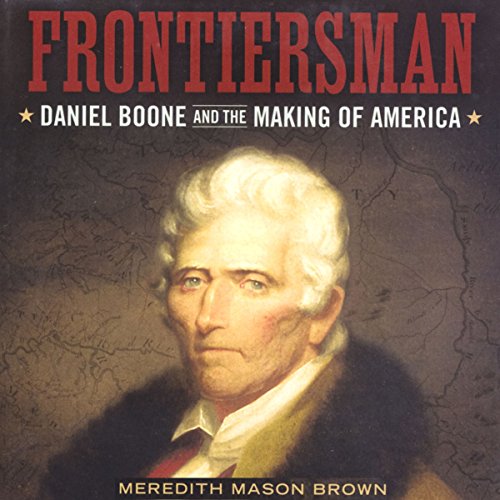 Frontiersman: Daniel Boone and the Making of America

By: Meredith Mason Brown
Narrated by: Todd Barsness
Try for £0.00

The name Daniel Boone conjures up the image of an illiterate, coonskin cap-wearing patriot who settled Kentucky and killed countless Indians. The scarcity of surviving autobiographical material has allowed tellers of his story to fashion a Boone of their own liking, and his myth has evolved in countless stories, biographies, novels, poems, and paintings. In this welcome book, Meredith Mason Brown separates the real Daniel Boone from the many fables that surround him, revealing a man far more complex - and far more interesting - than his legend.

Brown traces Boone's life from his Pennsylvania childhood to his experiences in the militia and his rise as an unexcelled woodsman, explorer, and backcountry leader. In the process, we meet the authentic Boone: he didn't wear coonskin caps; he read and wrote better than many frontiersmen; he was not the first to settle Kentucky; he took no pleasure in killing Indians. At once a loner and a leader, a Quaker who became a skilled frontier fighter, Boone is a study in contradictions.

Devoted to his wife and children, he nevertheless embarked on long hunts that could keep him from home for two years or more. A captain in colonial Virginia's militia, Boone later fought against the British and their Indian allies in the Revolutionary War before he moved to Missouri when it was still Spanish territory and became a Spanish civil servant. Boone did indeed kill Indians during the bloody fighting for Kentucky, but he also respected Indians, became the adopted son of a Shawnee chief, and formed lasting friendships with many Shawnees who once held him captive.

During Boone's lifetime (1734-1820), America evolved from a group of colonies with fewer than a million inhabitants clustered along the Atlantic Coast to an independent nation of close to ten million reaching well beyond the Mississippi River. Frontiersman is the first biography to explore Boone's crucial role in that transformation. Hundreds of thousands of settlers entered Kentucky on the road that Boone and his axemen blazed from the Cumberland Gap to the Kentucky River. Boone's leadership in the defense of Boonesborough during a sustained Indian attack in 1778 was instrumental in preventing white settlers from fleeing Kentucky during the bloody years of the Revolution. And Boone's move to Missouri in 1799 and his exploration up the Missouri River helped encourage a flood of settlers into that region.

Through his colorful chronicle of Boone's experiences, Brown paints a rich portrayal of colonial and Revolutionary America, the relations between whites and Indians, the opening and settling of the Old West, and the birth of the American national identity. Supported with a detailed chronology of Boone's life, Frontiersman provides a fresh and accurate rendering of a man most people know only as a folk hero - and of the nation that has mythologized him for over two centuries.

"There have been several biographies of Daniel Boone in recent years, but Frontiersman now sits atop the list as the most engaging, engrossing, and - not a minor matter - far and away the best written." (Joseph J. Ellis, winner of the 2001 Pulitzer Prize for Founding Brothers)
"Mr. Brown's book is a fascinating account of this important figure." ( Washington Times)

What listeners say about Frontiersman: Daniel Boone and the Making of America

I like the traditional "challenge what you knew about this character" story, but if you told me it was read by a robot I would have believed you. While words were clear, there was almost no inflection or change in tone throughout the book.

Lots of interesting "tidbits", but the author's style did not particularly agree with me. I thought the book was choppy. He would start in on a particular narrative/setting, then jump back and forward over many years. Next chapter he would do the same thing. It was hard to follow Boone's progression as he aged since most of the book was written like this. Very strange for a biography.

Would you listen to Frontiersman: Daniel Boone and the Making of America again? Why?

I love the personal side of history and this certainly was a personal story. You get a good account of his triumphs and his failures with the hows and whys of both,

What was one of the most memorable moments of Frontiersman: Daniel Boone and the Making of America?

The death of his second son at the hands of the indians in a battle that should not have taken place except for bravado and pride was most memorable.

What does Todd Barsness bring to the story that you wouldn’t experience if you just read the book?

The reader mispronounced some words which I found distracting, however on the whole he was very good. I listen to books in the car while driving and I coldn't be reading myself so readers like Todd are essential.

I wanted to listen to all of it at once. The details in it were not things I already knew and I found it facinating.

The research of this material must have taken a long time and I really appreciate the authors effort in bringing these facts to me iin such a concise and entertaining way.

This is a very long book and it was slow to keep my interest at first. However, I quickly got into the adventures of Daniel Boone and wanted to learn more about this fascinating man who had an extreme influence in shaping the expansion of our nation. I ended up finishing the book by listening to it on Audible. Great book on the early history of our country, its westward expansion, life on the frontier, the birth of Kentucky as a state, and interactions with Indians.

I love history in the United States. I always have. I grew up watching films in school and at home and loved this idea about Daniel Boone. But of course you can always lose track of what's true and what's not when Hollywood is involved. This book explains so much about his life and the development of our country and so many intricate ways that it's really open my eyes about the truth behind the founding of our country and the complexities that we faced over the years. Most importantly that even the most honest and good-hearted man will continuously find themselves being taken advantage of if they are not able to understand the system that surrounds them. But, like many of us today, we can lead a simple life and be happy if we just do what we love and be content with it.