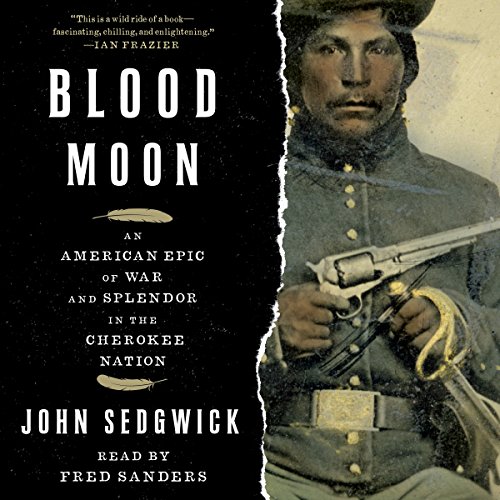 By: John Sedgwick
Narrated by: Fred Sanders
Try for £0.00

This sweeping American epic reveals one of the greatest untold stories of the 19th century: the fierce rivalry between two great Cherokee chiefs that led to war, forced migration, and the devastation of a once-proud nation.

Blood Moon is the story of the century-long blood feud between two rival Cherokee chiefs from the early years of the United States through the infamous Trail of Tears and into the Civil War. While little remembered today, their mutual hatred shaped the tragic history of the tribe far more than anyone, even the reviled President Andrew Jackson, ever did.

In this epic saga, John Sedgwick brings to life an untold chapter of American history through the relationship between one chief called The Ridge, a fearsome warrior who spoke no English but whose exploits on the battlefield were legendary, and John Ross, who was the Cherokees’ primary chief for nearly 40 years, yet displayed the Scottish side of his mixed-blood heritage and spoke not a word of Cherokee. To protect their sacred landholdings from American encroachment, these two men negotiated with almost every American president from George Washington through Abraham Lincoln. At first friends and allies, they broke on the subject of Removal, breeding an enmity that led to a bloody civil war within Cherokee Nation that culminated in the two factions battling each other in the War Between the States.

Dramatic, far-reaching, and unforgettable, Blood Moon paints a portrait of these two inspirational leaders who worked together to lift their people to the height of culture and learning as the most civilized tribe in the nation and then drop them to the depths of ruin and despair as they turned against each other. Theirs is a story of land, pride, honor, and loss that forms much of the country’s mythic past today.

What listeners say about Blood Moon

As ever the USA are shamed by their treatment of natives. A hard story, super research, narrative could be better.

What made the experience of listening to Blood Moon the most enjoyable?

This is a true story so these were real people not just characters as you say. I only liked the people who really tried to help the Indians. Not those who were greedy & only wanted money & fame for pretending to help them.

Would you listen to another book narrated by Fred Sanders?

No, his voice was raspy sounding & annoyed me so much so that I had to shut off the tablet to rest my head as it gave me a headache.

Every thing that was said about the whites taking the land from the Indians mad me sick & the way the Cherokee were treated. I am totally disgusted with my people who treated these proud tribes with such disregard & beat them & killed them by taking their land & hunting grounds from them & bringing death & hunger & disease to them.

I have more empathy for the Indians than I used to after hearing all the things they had to had live through or should I say died for. I am 1/4 Cherokee. I am appalled at what they went through. People can be so cruel & inhumane to other people & animals. I am ashamed for my white ancestors who did this to the first people who were here first before the whites came & destroyed their freedoms.

This book takes a complex subject in American history and breaks it down to an understandable narrative. No one is nessisarily the "bad guy", but it does last out everyones flaws who were involved.

I am of Cherokee decent and am currently searching for information about my heritage. All records were burned and I have, miraculously, one remaining picture of my Native Great Grandmother because of the hate that still runs deeply from, sadly, my own relations, mostly of English ancestry. How is it that people are still so consumed with judgement in an age when we should be most enlightened?
Beautifully written, this book/audiobook is a sad testament of the damage that hate, ignorance and ego-driven greed can cause. I hope we will learn from the history shared here and chose better for our present times.

A unique perspective on American history

This book stands alone. Every other narrative of the trail of tears and of the civil war follows the same predictable well known paths. If all history was this good we would all be historians. Amazing.

Very informative and fascinating to hear this side of history. The Cherokee are an amazing people to learn about.

I have hundreds of history books. This book is just terrible old narrative of some humans are inherently bad, some are inherently good. I think that is called racism. I rarely delete a book before finishing.

If you want to truly learn the history of our cherokee nation, this book is the place to start.

I found this book very interesting the story was great. I highly recommend it there were several items that I didn’t know about with the Cherokee people

Heading Optional?(make up your mind)

The book was good. Narration was hard to push through but I enjoyed it overall.

I originally bought this book for my Scout Troop & a 3-day canoe camping trip in NW Georgia. I read “Thunder in the Mountains” about Chief Joseph & the Nez Perce Indians of the Pacific NW. This was a fascinating read. So, I wanted to share with the Scouts some cool Indian stories about the Indians in Georgia.
And, I feel very confident that “Blood Moon” achieved the excitement I was searching for.

The book was long, but worth it. I was hoping for a more happy ending for the “good guys” and was a little disappointed towards the end. However, the author did a nice job ending on a happy note about the future of the Cherokee Nation.