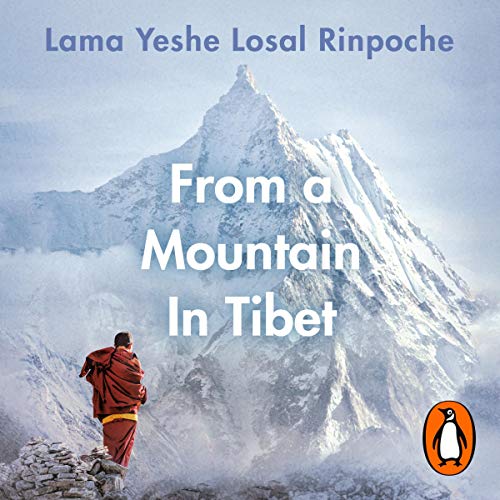 From a Mountain in Tibet

Lama Yeshe didn't see a car until he was 15 years old.

In his quiet village, he and other children ran in fields with yaks and mastiffs. The rhythm of life was anchored by the pastoral cycles. Food was carefully apportioned and eaten together, everyone was family.

The arrival of Chinese army cars one day in 1959 changed everything.

In the wake of the deadly Tibetan Uprising, he escaped to India through the Himalayas to start over as a refugee. One of only 13 survivors out of 300 travellers, he spent the next few years in America, experiencing the excesses of the Woodstock generation before reforming in Europe.

Now in his 70s and a leading monk at the Samye Ling monastery in Scotland - the first Buddhist centre in the West - Lama Yeshe casts a hopeful look back at his momentous life. From his learnings on self-compassion and discipline to his trials and tribulations with loss and failure, his poignant story mirrors our own struggles.

Written with erudition and humour, From a Mountain in Tibet shines a light on how the most desperate of situations can help us to uncover vital life lessons and attain lasting peace and contentment.

What listeners say about From a Mountain in Tibet

I really enjoyed learning about Buddhism through a personal story of the author. I found myself fully engaged in the story, searching for any available minute to listen to the book. It inspired me to go and find other books to learn more.

One of the best books !

I’m a Hindu but Buddhism very much interests me . I was searching for books on Buddhism and came across this.
Thoroughly enjoyed it .
A very gripping book, so genuine and such spiritual insights .
It is so inspiring to see the power of mind and I’m so much in awe of Lama Yeshe Losal - who could achieve so much in a single life time specially as spiritual progress is usually described as slow .
The narration is brilliant too- actually can imagine the valleys of Tibet & river Brahmaputra & even partially experience the dark retreat !

It begins with an account of a childhood in a pre-modern world of Tibet and the monastic system, of a time and place that is now lost. It describes a harrowing escape from Tibet, and different approaches and attempts to establish Tibetian buddhism in the West. There are contemporanious accounts of well known characters in Tibetian Buddhism in the West in the 60's and 70's, notably Freda Bedy, Trungpa and the Karmapa.

Mostly though, it is a story about a life and a person who, it is obvious, is kind, selfless and wise. He has become this way through his own efforts, and the support, faith and trust of people around him.

It sounds terribly cliché to say that Lama Yeshe Losal is a teacher who wants to help people bring about inner peace, but this doesn't make it less true. The account of his life and how he attained peace, despite all of the obstacles, has helped me find more peace in my own life. I believe that it can help you too.

Through skilfully telling of his own struggles as a Tibetan refugee disillusioned with his plight in life, Lama Yeshe skilfully weaves insightful teachings learned through the depths of his own difficult experiences in what has been a difficult and tumultuous journey filled with much sadness and grief. Alongside these difficulties, there has much much joy however thanks to the strength of his Buddhist faith, explained in a way that many Westerners can relate to, and which they can use to great effect in their own life to ease their own difficulties and troubles.

Thank You for this precious gift Lama Yeshe Losal Rinpoche 🙏💖🌈

Very few books I have listened to give you the feeling that the author is truly opening their heart to you, the reader, as this one does. Not only is this an inspiring story of courage, determination, love and sacrifice, but also a glimpse into the mind of a truly wise and generous being. A pleasure and a privilege to read the book.

One of the most inspiring books I’ve ever read

For me, this book is very easy to read.. It’s full of honesty, very inspiring and gives you the opportunity to approach Buddhism from a very kind and dynamic light. Very grateful for the opportunity to experience in my mind the exciting journey of Lama Yeshe Losal Rimpoche…

took a while to get into the stride of it but once I did I found it brilliant, really interesting and humbling..great book.

A lovely story of overcoming obstacles of the mind. I really enjoyed this and I feel like the messages will stick me personally

Thank you for this book. I knew I was missing something in my life and after looking into Buddhism for a while, backed by the stories and information in this book, I've found it.

What an amazing book, how a young mans life changed, eventually leading him to not only face, but utterly overcome his difficulties, going on to be a spiritual guide and leader who has benefitted millions o people as a result.

This true narrative from sinner to saint is remarkable. Thank you, as it resonates with my story but so completely different from Lama Yeshe Losai Rinpoche's; yet so similar in terms of the process of spiritual transformation through falling upward and needed suffering. This tells of the archetypal heroe's story who, in order to change and mature needs to separate from 'home' and all that is known and familiar on many different levels, and journey through many trials, temptations and struggles and learn from them in the conquering of the demons, dragons and wolves within ourselves, and learn to befriend and integrate them with the result of transformation and deep compassion for ourselves and everyone else and their struggles and trials. It is a story too of complete honesty and vulnerability.

Loved it. Very inspirational. Yesterday Rinpoche tells his story of how he was a "hooligan" before deciding to start his transformation at the age of 36.

This was great!!! The author did a great job with the pronunciations too!!!! Give it a go! It is heart warming and honest!!!

I found this story to be exactly what I needed and loved it. Thank you Lama Yeshe Losal Rinpoche for taking the time to write this book.

One of the best books I've read in a while, and it is for Buddhist and non-Buddhist alike.
What a life this man has lived.

I learned a lot from this story. It’s inspiring and informative. Narrator did a great job also. I was disappointed when it was finished.

I loved nearly every aspect of this book. The story and what Tibet had to go through when China invaded them is tragic, yet very intriguing, and hearing/reading a first hand account followed by everything else that happened in Lama Yeshe Losal Rinpoches life was a beautiful story. Highly recommend

i purchased this book unknowing this exact person. though have been exposed to a large amount of the people around him in some fashions at least. Surprisingly this is the fastest book i ever finished. Very good read for the western mind.

Such an inspiring spiritual journey. I would highly recommend, especially if you’re interested in Buddhism or meditation.

As someone that’s spent a lot of time in Tibet with both lay people and monks, I found this book a little redundant for what I already knew and had experienced. I’d recommend it for people that have interest but no first hand accounts.

It also is a great little beginner for Buddhist thought, practice, and theory. For me, I let it play in the background and enjoyed having some Buddhist allegories and stories told in easy to understand language and terms.