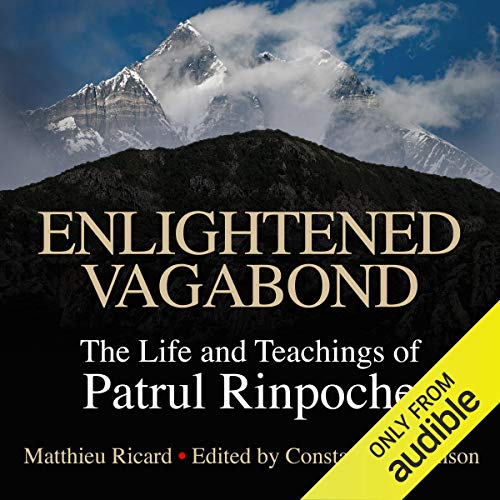 Colorful stories about and profound teachings of Patrul Rinpoche, one of the most impactful teachers and thinkers in the Tibetan tradition from the 19th century.

The life and teachings of the wandering yogi Patrul Rinpoche - a highly revered Buddhist master and scholar of 19th-century Tibet - come alive in true stories gathered and translated by the French Buddhist monk Matthieu Ricard over more than 30 years, based on the oral accounts of great contemporary teachers as well as written sources. Patrul's life story reveals the nature of a highly realized being as he transmits the Dharma in everything he does, teaching both simple nomads and great lamas in ways that are often unconventional and even humorous, but always with uncompromising authenticity.

What listeners say about Enlightened Vagabond

Essential reading for anyone seeking a deeper understanding of the Dharma. Excellent narration. Highly recommended

This inspiring book recounts stories about Patrul Rinpoche. It is inspiring and humbling, well written and read skilfully.

loved this, inspired to practice with more compass

compassion, gratitude bodhisattva inspired that all I can say
loved this book needed this at this moment in my life

Insight into the life of a great nyingma master.

Interesting and diverse collection of stories that are well written and well narrated. Highly recommended.

I highly recommend this book and I hope you enjoy reading it as much as I did.

I'm so glad to see some of these amazing teachings translated into audiobooks. With all of the names and lineage, many times It can become a big word soup. Hearing the pronunciations and having the luxury of being able to drive and listen to teachings at the same time is simply amazing. Learning about the teachers that brought these teachings to us is the first step in understanding how to tame our mind. What a wonderful book and a wonderful teacher! Thank you!

I was excited to see Patrul Rinpoche on Audible. This is a good book.

But I really wish Audible had the books of Patrul Rinpoche available as an audiobook.

Specifically, his classic introduction: "Words of My Perfect Teacher"

There are far too few authoritative translations of Buddhist texts on Audible.

For secondary sources and other biographies, "Lives of the Masters" series published by Shambhala would be an excellent addition.

Wonderful teachings by a great enlightened being. He is so humble and full of compassion. He indicated a good heart and kindness are key essential qualities for beings to live by. He was committed and dedicated in his spiritual practice, never wanted to accept any offerings given to him. He was a true renunciant with the heart of a Bodhisattva. Great book for spiritual seekers.

Patrul is amazing. thank you Mattieu Riccard for you efforts to enlighten me. I bet you have much to teach personslly.

Memories of precious moments of my own perfect teacher

A wonderful book taking the listener into the heart of BuddhaDharma and the very secret rare world of the Dzogchen Lineage. Several times my eyes filled with tears as this book poignantly reminded me and took me bank to precious moments of pure kindness to my own precious masters and teachers: Khenpo Sonam Tobgyal Rinpoche of Riwoche Temple, Kyabje Nyoshul Khen Rinpoche, of the Longchen Nyingthig Lineage ,Pema Tsangzin Khandro ( Ven Dhyani Ywahoo) and the illustrious Kyabgon Phakchok Rinpoche of the Chöeling Tersar Lineage.

With deep bows of gratitude and appreciation,

I really enjoyed this book. Roger Clark's voice was clear and never distracted me from the content. The stories are inspiring and illustrate the life and teachings of a very wise Tibetan monk, Patrul Rinpoche.

I must admit that there was one little part of the book that bothered me a bit. It is from the section Do Kyentse's Hospitality. In this story, Patrul accepts a food offering slaughtered on his behalf. I won't go into detail about how he rationalizes this decision, but I was disappointed that my new hero would do this because to my mind, he was practically a deity. I got to thinking about it and came to the conclusion that I shouldn't even expect a saint like Patrul to be perfect. He was a human being after all. Even the great ones are bound to misstep from time to time, they just err much less frequently than the rest of us.

This book is a favorite of mine and is brimming with stories of Patrul helping others and living with tremendous compassion, humility and wisdom.

Great collection of life stories. Unique yet somehow relatable. What a precious Master. Loved it!

one of the most remarkable spiritual biographies I've ever read, lucid and intriguing. It'll leave you wanting more

Raise Your Awareness. Raise your frequency